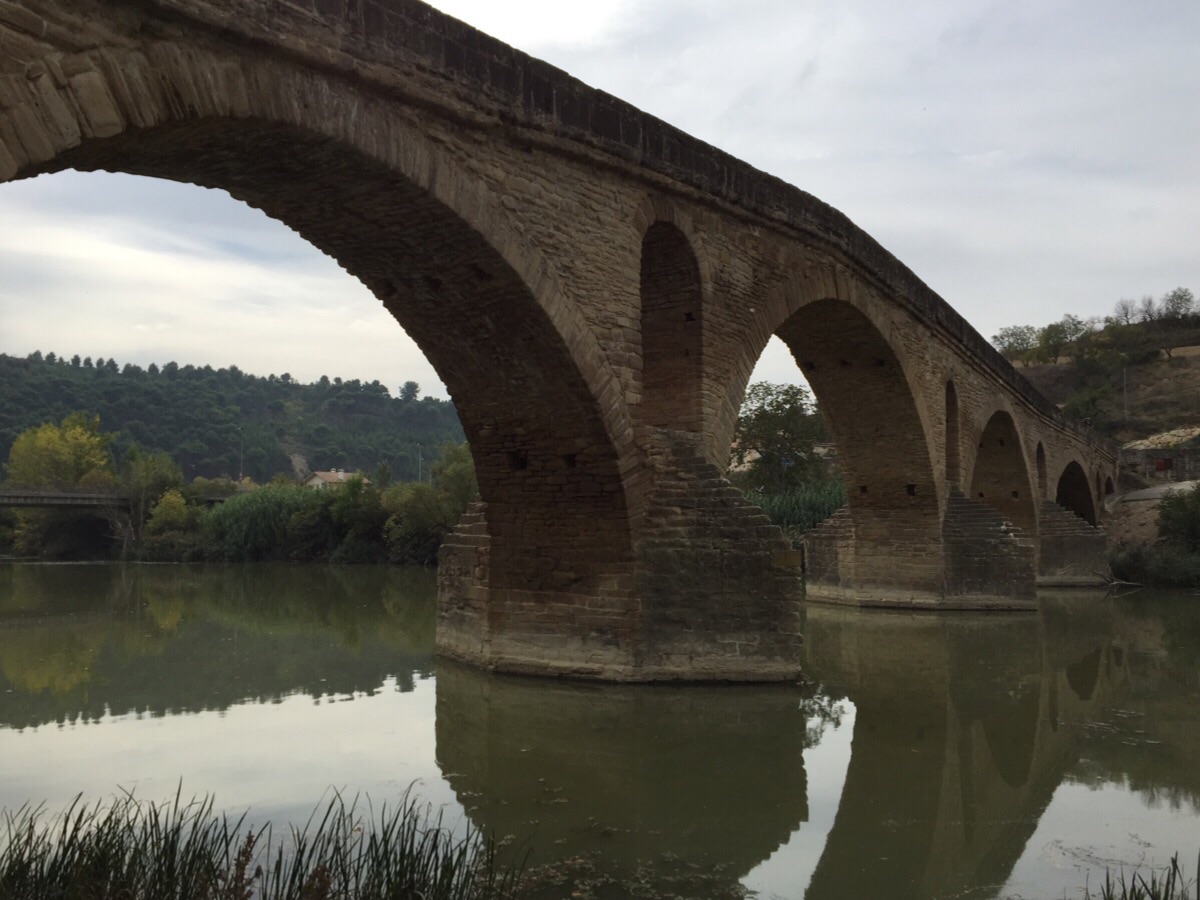 8 people, multiple snorers, I did not sleep well. I tried using two different ear plugs together to see if that would work better, but that made it so it was uncomfortable to sleep on my side, so I was on my back for a bit, so I probably contributed a little to the snoring.

We got up about 7:30 and had breakfast, which was a small glass of orange juice, hot chocolate, and a small pre-packaged powered bread thing.

We got on the road about 8:45 and headed up the hill to the crest with the windmills and the cool iron figures. We posed a bit and headed down the other side. It’s amazing how different it looks already. Spain is starting to look drier.

We went through several small towns before coming to Puenta la Reina. We found a supermarket and decided to have a picnic lunch. And I bought a new hairbrush!

Also, this is the first town that had churches open! I have been sorely disappointed in Spain so far. Almost all of the churches on the camino in France were open, and I read on the forum it was the same for Spain, but I have not experienced that. Every town we have come to all of the churches have been shut tight, except for the Cathedral in Pamplona, and you had to pay to see that one. We got to see two churches in Puenta la Reina.

We went to the office of tourism and got stamps in our credentials and used the bathroom. Then we walked down to a little grassy area by the bridge and had a magnificent lunch with bread, paté, goat cheese, chorizo, olives, watermelon (it was only 2 E!), a pepper, and some milkas cookies. It was fabulous. I didn’t realize until after I had eaten how hangry I had been. I think I’ve been hangry for 3 days. I have not been getting enough food. Also, the days have been too long, so that has not been helping my mood. It’s hard getting the hang of Spain.

Alison saw us from the bridge and came down to join us! She didn’t really have a lunch or food planned, but she helped us eat ours. We all walked the rest of the day together. Alison was also a biology major in school and she quit her job to come to Europe too. She had actually planned to come to Europe before she had even heard about the camino, and then decided a month before she came to do it. How crazy is that?

We still had 13k ish to go after lunch. There was a lot more uphill than any of us had remembered from the topo map.

We walked through some vineyards, and I picked up some grapes from the ground to eat. Bunches, not individual grapes.

We came up to this adorable little town that was only on a hill top. It was so picturesque. We walked up, up to the top, and found a stamp chained to the wall, then walked down.

On the way out of the city Michael caught up with us. He’s also an American, from Florida, and he’s spent time playing the piano on cruise ships. There was a map of the world in bushes, or something, on the hillside. It was quite detailed! Also on the way out of the city was a pretty well preserved 2000 year old Roman road. We actually ended up walking on the road off and on for a good 5k. The road is obviously not in as good of shape as it was 2000 years ago. Very impressive, though.

It was late when we got into Lorca. 6 pm. We found an alberge that has double rooms, and I’m sharing with Tracy. I really need to sleep tonight.

We all had paella for dinner. The sign on the door said it was “fresh” but it was obviously pre-packaged. It seems like most of their food here is. The albergue itself is very nice, though.

It has been nice walking with Tracy, but we have different time tables. She has 42 days (total) to get to Santiago, so she wants to take more of her time and sit and enjoy some cities. I took more rest days that I would have liked in France, and I’m worried that I won’t have enough time to go to Finisterre. So while it has been nice, and it’s also been the longest I’ve walked with anyone up to this point, I think we will start doing our separate ways tomorrow. I’m hoping to go another 30k, and she doesn’t have to go that fast.

I’ve learned a lot of interesting and valuable things talking with her. I’ve also learned that I need to eat more so I don’t get so hangry.