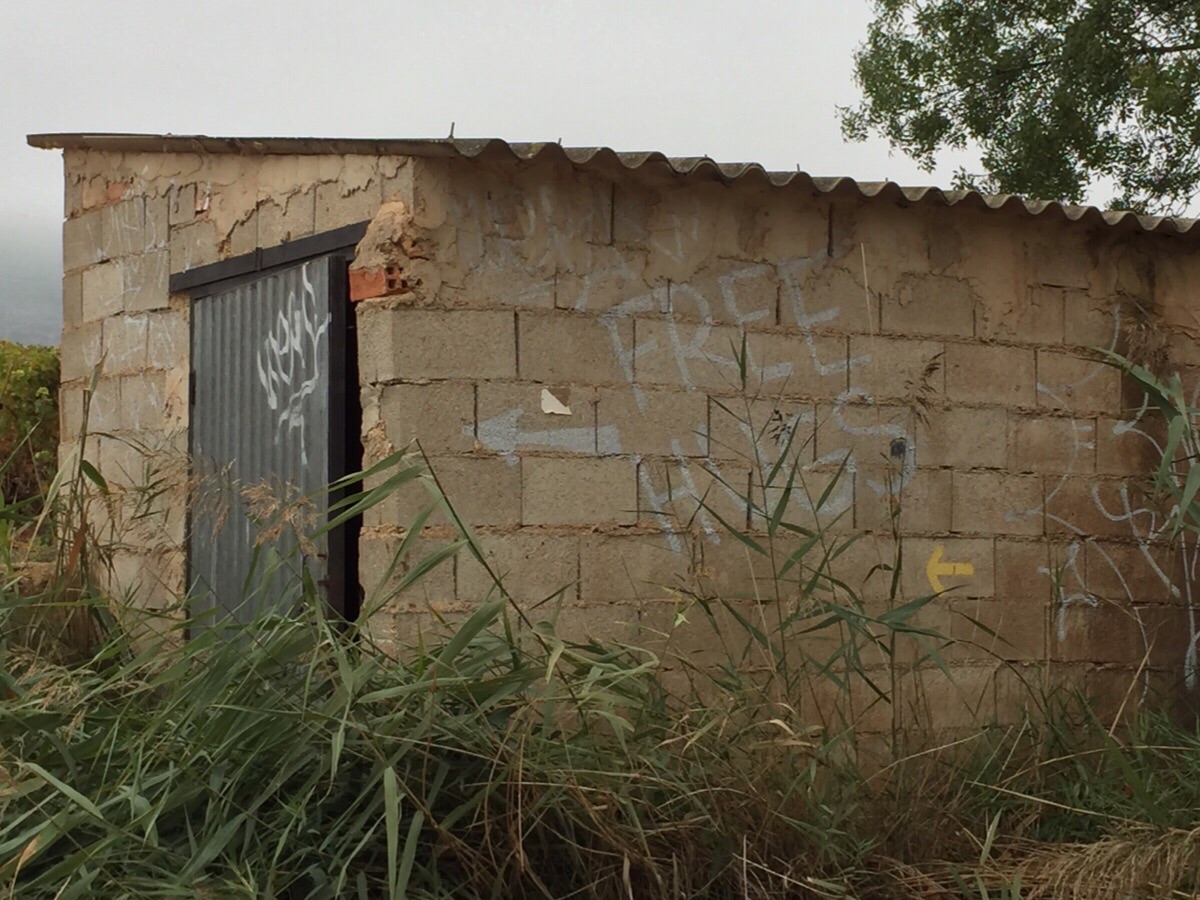 I wonder how many people look.

It was so nice to share the double room with Tracy and get some sleep, and it was only 12.50 per person! Not bad. I woke up about 7:40 and started getting ready. Tracy wanted to stay till 9 and have a good breakfast, and I wanted to leave before then because I wanted to go 30k. Tracy has some more time to get to Santiago, and I really would like to go to finisterre as well, which could be another 5 days. I need to sit down and see if it’s feasible. It was so nice to spend these last few days together and get to know each other, but our Caminos are different from here on out.

We said our goodbyes and I was out the door by 8:20 ish. It had rained during the night, but thankfully there was no rain today. It was, however, cloudy and foggy, and beautiful.

I discovered that snails like to climb things.  Who knew?  I also discovered that the slugs here are jet black.  The slugs in France were bright orange, but as I got toward the pyrenees, their color started changing to more gray, and now they’re black.  I wonder if it’s diet or other environmental factors.

The first town I came to was Villatuerta. I bought two croissants and a pain au chocolat (but I don’t know the Spanish name), and I have to say, they are still amazing. I shouldn’t have bothered listening to that French woman who had bad things to say about Spanish pastries. They tasted plenty buttery to me.

Right outside the store, I caught up with Alison sitting on a bench by the bridge! We talked for a bit and I shared my pastries. She has much more time than I do, and she was also planning on going much less far, so I headed on without her.

Outside the town there was an old church about 100m or so off the path. I decided to go look, and it was open! There was nothing inside, and it was very dark, but it was still cool to see. It was also surrounded by a lovely olive orchard, so that was fun to see.

After leaving the little church, I caught up with Alison again a few minutes later! We talked for a bit, but I went on ahead again.

There were still quite a few hills during the first part of the day. I’m looking forward to the Meseta. The second town I came to was Estella-Lizarra, and it’s actually fairly good size. It has a bunch of old churches.

I came to an old church with an impressive set of stairs, but I saw the door was open so I went up them, and got to see inside the church! There was a couple sitting at a table and saw that I was a pilgrim and called me over for a stamp. We had a difficult time communicating. I got the stamp and gave a 2 E donation in the jar, and then the man asked if I wanted to see the cloister. Yes, I did! Si! Apparently this cloister is only open for special tours, so it was nice that they let me see! Two of the sides were destroyed in some kind of war.

I went to the office of tourism and got a stamp as well, then I headed out of town.

I caught up with Alison again on a park bench! We thought it was pretty funny I wasn’t doing a good job of staying ahead of her. We walked and talked this time for a good hour or so. We have very similar backgrounds. We had both thought about doing a lot of the same things.

There was a monastery winery thing at the top of a hill.  Apparently it has a famous wine fountain.  I got an absolutely adorable picture of Alison, but it’s on her camera and not mine.

We walked up the hill into Villamayor de Monjardin together. She was planning on staying there and giving her feet and legs an afternoon break. I still had 12k to go, but decided eating would be a good idea. We found a bar and got some food.

There was nothing for that 12k. It was through vineyards and fields, but the crops had been harvested by this point. It was quite beautiful, but also very long.

I sat down a couple of times when I could, but sure enough, I got into Los Arcos right before 4:30. 8 hours to do 30k, and I still got to see some churches and eat some food.

It would have been nice to get in a little earlier, but I was really looking forward to some quiet and catching up on my blog.

I went to an albergue to try to get a double room, but they were full. I went to another albergue but it was closed. I headed through the square to the last one to see if they had any private rooms available, and I heard someone calling my name. It was Denise from the first day over the Pyrenees! I had been wondering earlier today if I would catch up with her soon. She said that day over was 0 visibility and she was terrified the whole time. I’m glad I waited another day, because I did get to see something.

She met up with Mimi during the last 3k on the mountain, and they’ve been walking together since. I discovered that there is a Miam Miam Dodo for the Spanish route! I had no idea! I want one so badly. I borrowed Mimi’s and found a pension to stay in, a mini hotel room with my own bathroom and sheets on the bed for 30 E. Heck yes. I will have to see if there is any possible way I can get a MMDD in Logroño.

I also met Mickey, from Jerusalem. He’s doing the camino for his 7th time. He was staying in the same pension. When I went to find dinner, Mickey was already sitting down at a restaurant so I joined him.

I told him I’d lived in Jerusalem for 4 months, and when I told him where, he said, “Oh, yes! We go there for concerts. Lovely view of the city.” When I said I was there from January to April, he said sometimes they get some snow, and I said, “we got 18 inches,” and he said, “I know which winter you’re talking about.” It was fun. There’s actually a bit about Spain that reminds me of Israel. Maybe it’s just seeing all of the olive trees.

Spanish food is pretty different, even in the “nicer” restaurants, the vegetables are frozen, then ridiculously over cooked. This doesn’t bode well for the future.

I got some ratatouille, which looks disgusting in the picture. It was held together with eggs. It was all severely over cooked. Then I got Salmon, which also came with over cooked vegetables, but the salmon was perfect. Dessert was a couple of pieces of honeydew, or something similar.