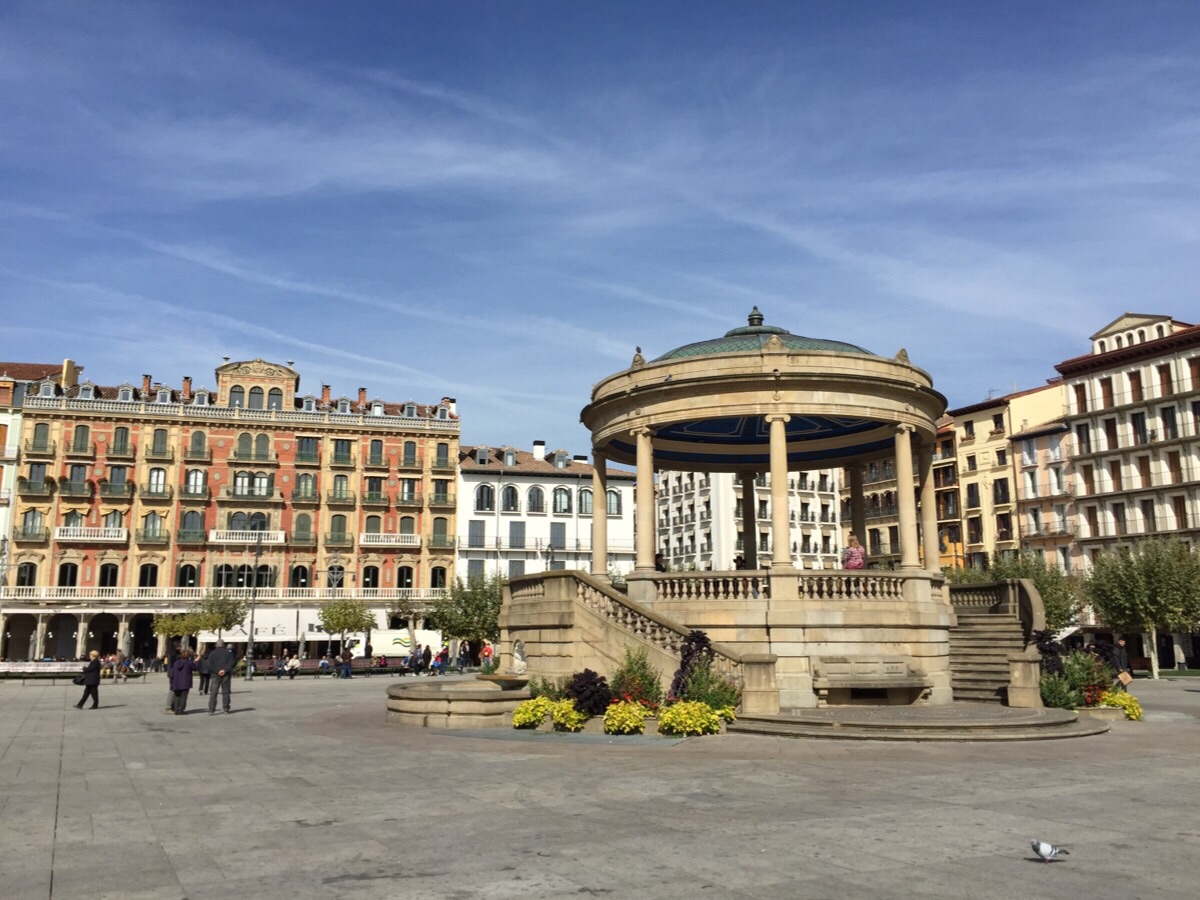 He took us down to the church and took pictures of us, which was sweet.

Tracy and I went down the street to a breakfast place and got some orange juice and tortilla.

Then we started walking the 5k into Pamplona. We took the route along the river instead of through the suburbs. It was still very cold, just over freezing.

The old city of Pamplona is up on a hill and there’s a big wall around it. We walked around the inside of the wall a bit, and then went to see the Cathedral. We found Alison waiting outside! She said Prunie and Ringo went to look inside the Cathedral, but it cost 3 E. I was like, heck yes I’m going to pay 3 E to look in a Cathedral!

Turns out there was also an amazing museum attached as well. It took much longer to see than we had anticipated.

I rushed a bit through, because I was afraid the post office could close early and I wanted to get my package. I also hadn’t realized how large Pamplona was, and I realized there could be a lot more than one post office. But I also figured, the address was posted on a pilgrim site, so it was probably the post office closest to the pilgrim route. So I found the closest post office on my phone and headed there.

Pamplona is very cool! The buildings are beautiful. There are also buskers everywhere, so I lost a few Euros to them. There was a flautist and violinist playing the Love Theme from Cinema Paradisio, and it was the most beautiful thing ever, wafting through the streets.

I found the post office and went inside and took a service number ticket. When my number came up I went to the lady and asked if she spoke English. No one in the post office spoke English. I showed the phone to her with the address and she nodded and said this was the right place. She asked if it was a small package or big. I said big. She went into the back for 5 seconds and came back and said it wasn’t there.

I didn’t know what to do at that point, so I walked outside. Our post office had said 6-10 days delivery, and it had been 15 days. I decided to go back inside because maybe she didn’t know to look for a box. So I looked up the spanish word for box and took another ticket. I got a different lady, thankfully, and she went in the back for longer than 5 seconds and came back with my box. I didn’t understand anything she said, but I was pretty sure I had to pay 47.51 E to get my box. From the forum, it sounded like I would only have to pay 4 E to get it. I asked if I could come back. I went to get Tracy because she speaks a little Spanish. I just wanted to make sure.

I went and found Tracy having a fabulous time sitting on the Plaza, listening to accordion music.

After sitting for a bit, we went to the post office, took a number, and got my original woman. Turns out it’s an import tax on the shoes and socks. 47.51 E for a value of 150 USD. I’d say that’s pretty steep.

At this point it was 2 pm, so we went to look for a place to eat. I wanted to get a huge meal. We went to a tapas bar and got and split a bunch of tapas, and Tracy paid for it, since I had just paid 47.51 to get my box. That was very nice of her!

We got a fried cream of mushroom ball, which was the best thing ever. A ham and melon salad, which was also delicious. An egg thing on bread with fried onions. A fried roll of zucchini, ham, and salmon, with a lemon sardine on top. And one that was like a veggie kebab with chicken.

It was fun to get tapas.  I really didn’t know what to expect, but it was still food and very good.

We started walking out of the city and sat on a park bench while I opened my shoes and Tracy popped a blister. The shoes feel different! Because they are new, and socks are so fluffy, they feel tighter on my feet. I’m keeping my old shoes for a few days while I break the new ones in, just to make sure they’re ok.

We started walking out of the city about 4 pm, which is usually when I like to be at my place for the night. These late nights are not what I’m used to.

We stopped at the University of Navarra to get a stamp.

Then it was up the hill to Zariquiegui.  We were headed toward the hill with the windmills on it.  It was pretty cool because that was a recognizable part of the movie.

The albergue was pretty full. We took the last two beds in a room of 8. I’m not looking forward to tonight, but who knows, it might be ok.  We also found Alison when we walked in!

Dinner was whenever we wanted. I got a salad, meatballs, and flan. I was going to get the yogurt instead of the flan, but then I thought, “what if the flan is really amazing?” It wasn’t. I still don’t really like flan.

While we were eating, a guy came into the bar and started playing his guitar.  He was a very good whistler, and a good guitar player too.  He entertained us for quite a while.  Turns out he might also be the plumber.  Tracy really got into it. 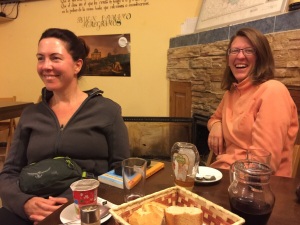