I did not sleep well. The bed was super hard, I think that was the main reason. I’m a side sleeper and just couldn’t get comfortable. I was also hot and cold all night, but I didn’t sweat, which was a huge blessing. But I just slept very badly and my dreams didn’t help.

The guy had said last night that breakfast started at 6:30, but I thought there was no way I’d be up that early. They probably start that early because no one can sleep on the super hard beds and super flat pillows.

The magic cough drops didn’t work so well this time. I had the room to myself, so that was good, but I still coughed a few times during the night.

Breakfast was packaged toasts and butter and preserves. I think maybe the point of the toasts is that you’re supposed to dip them in your morning drink. They were out of hot chocolate, because yesterday they had a large group of Polish teenagers, and apparently they really like hot chocolate.

It wasn’t as cold this morning as it was yesterday afternoon.

I was out the door by 7:40. I had nothing booked today and I didn’t know how far I was going.

Once again, the path was super easy to follow. It was pretty steeply down at first, but then it followed a road along the mountain for a while and that was fairly flat. It was weird. I haven’t had much flat the past few weeks. 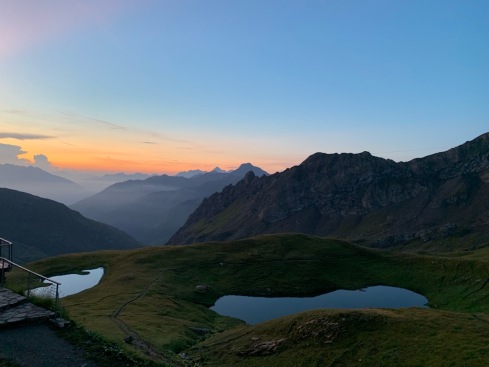 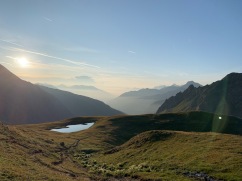 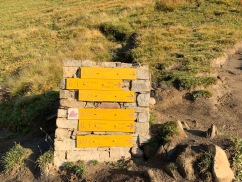 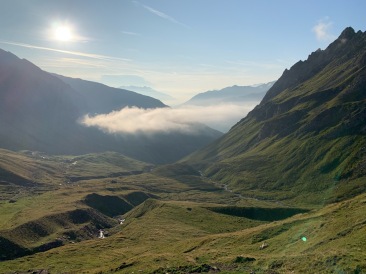 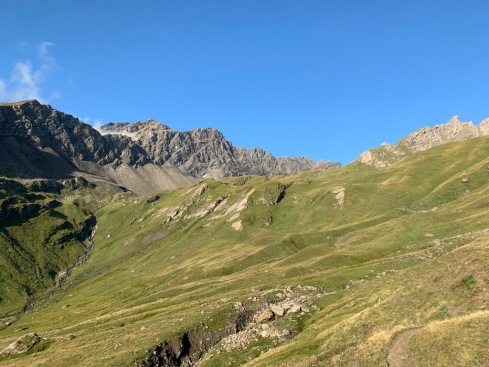 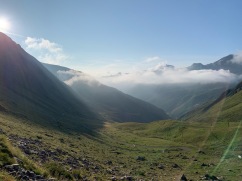 Today was one of those days where I had to pee every hour. As far as I know I didn’t flash anyone. 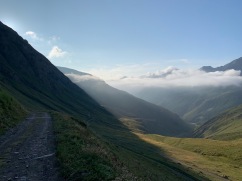 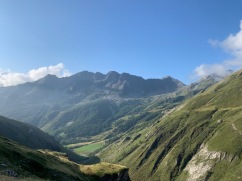 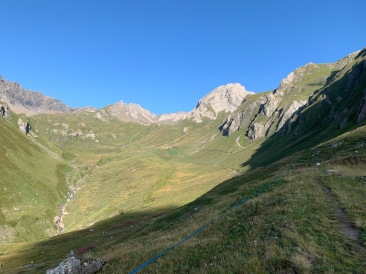 After following the road for a bit, the path took a more direct route down the hill to cross the stream. There was a dog at the top of the hill, but I figured it had to be there with someone. Turns out he was with the guy watching the cows just out of sight down the hill. 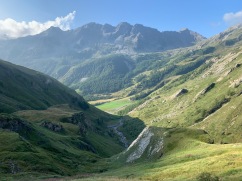 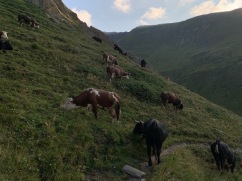 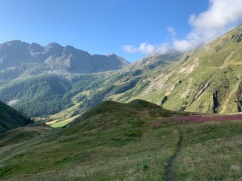 It was quite a nice walk down, then across the river and around the hill. This part was fairly flat, too, covering distance more than altitude. 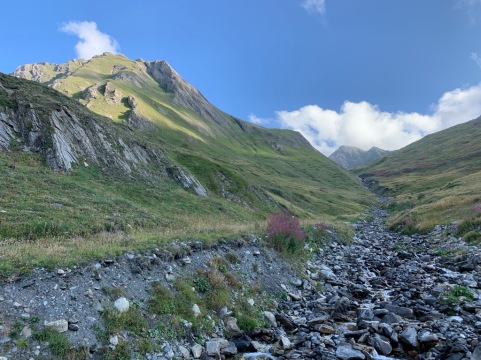 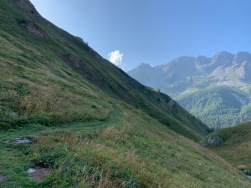 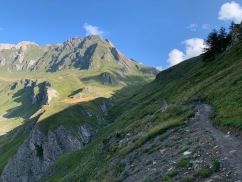 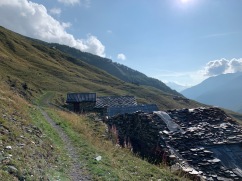 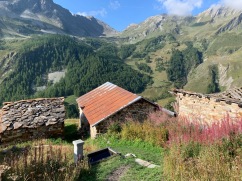 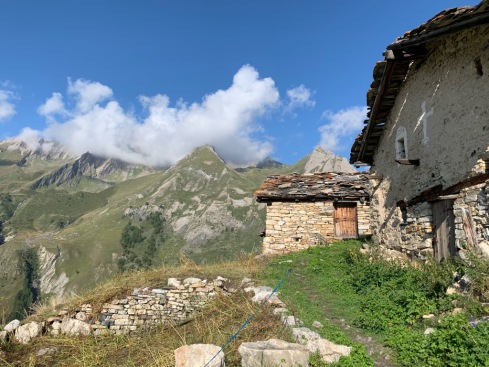 I could see a town. It actually worked. 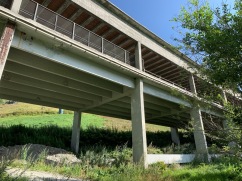 I made it into town and started following the arrows and spray painted signs for TDG backwards. Tor Des Geants.

I also really, really had to go to the bathroom. I debated about stopping before town, but I was really hoping for a bathroom in town. There was nothing, but there were quite a lot of running fountains and sprinklers and streams that were happy to mock me.

The path went off the road onto a grassy area that ran below the road, and I finally found a place to pee.

I got into St. Rhemy and easily ran into the Via Francigena. It was a bit emotional. It’s strange that I’m here. It’s also completely new and I don’t know how it works from here on out. 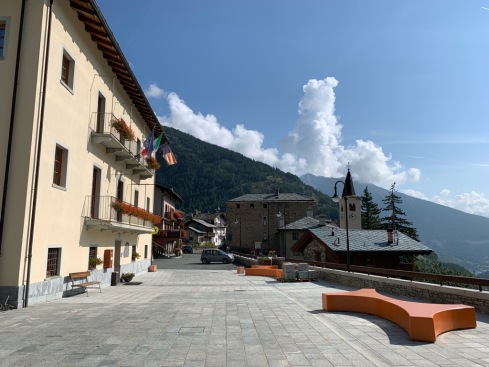 Also, as I descended into the lower altitudes, my sinuses started pounding. I guess that’s one benefit to having been so high. Now that I’m lower I feel like total crap. I feel awful. And my head hurts. 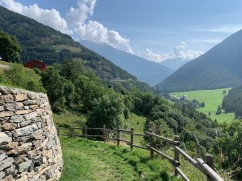 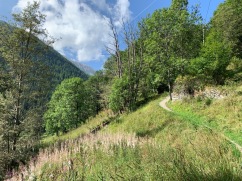 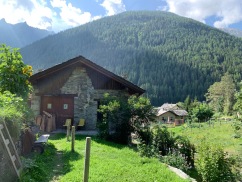 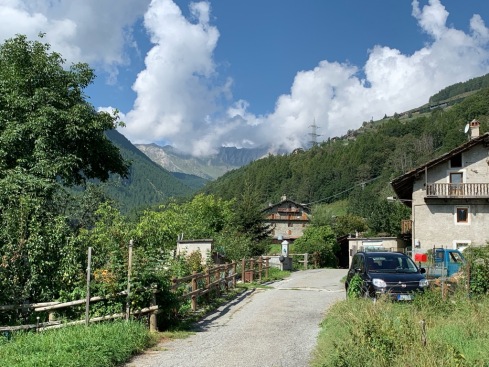 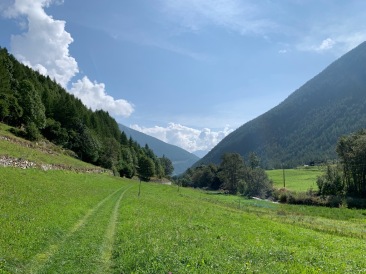 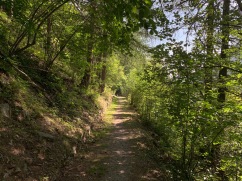 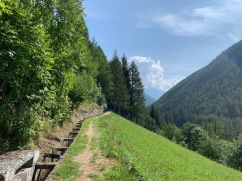 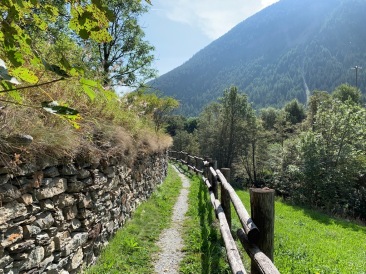 It was right before noon and I sat down to look at my app to try to figure out where to go. There were a couple of pilgrim friendly places near, and if I didn’t stop, it would be another 15k or so to the next places. Even though it was noon, I decided to try to stop. There was a chance of rain later, too, so I didn’t want to get caught in that. I don’t think walking in rain would help my condition.

I stopped at Chateau Verdun, which is a traditional pilgrim hospital, but apparently they were having a big party and didn’t have any rooms. I asked if they would call the next place for me to see if they had any openings. They did have a place, but they couldn’t feed me. There should be a place I can eat nearby.

It was only about a 10 minute walk to the next place in Etroubles. I cried a bit when I left. I just feel so awful. I want to curl up in my bed and feel better. I don’t really want to go home, I just don’t want to feel like crap. 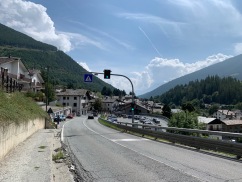 Now, as I’m typing this, my head has gotten worse. I took an actifed after getting here, but I’m not sure how much it helps. I just took some tylenol, but idk if that will help or not.

I’m trying to figure out my next steps and I don’t like the app at all. It only gives you distances between their set stages, so if you stay outside of that, it’s hard to figure out how far you’re actually going.

I probably need a neck adjustment. Ugh. I hope this isn’t a migraine. I get atypical migraines,, so I can’t always tell early enough when I get them. Crap.

And the beds are super hard again. I need a nice bed and to feel better.

My headache did start to lessen and I started dozing. Thunderstorms started about 4:45. Hopefully everyone was done walking for the day. But when I woke up I still had a headache.

I went to a pizza place abut didn’t get pizza. I got the daily special which was a trio of deer in blueberries, polenta, and gnocchi with sausage ragu. I got a tomato salad on the side. It was just tomatoes, and I added oil and vinegar to it.

I’m not a huge fan of polenta. It’s just bland. But it is filling!

I’m trying to book a hotel for tomorrow. Hopefully there will be WiFi and a better bed.