Once again, I did not sleep well because of the bed, but I did sleep better than the night before. When I woke up at 2 to go to the bathroom, my head and nose were clear. I took that as a sign that things were getting better and maybe I’ve finally kicked this. I did sneeze a few times later, and got a little gunky after that, but I really do think I’ve turned a corner.

At breakfast I met a German, Roland, who is walking a few weeks from Lausanne. He has 3-4 more days to walk. There was also a French couple biking the nearby passes. Yesterday they did Petit St. Bernard, today they’re doing Grand St. Bernard, and they said some others that I have no idea what they were.

Breakfast itself was kind of awful. The bread here so far isn’t great. It falls apart easily and is dry. They didn’t have any butter, or hot chocolate. But they did have some little packaged cakes kind of like little Debbie snacks, so I had two of those and bread with preserves and Nutella.

I paid and got my first stamp in my Francigena passport. It was 25 E for the bed.

I started walking a little before 9. That didn’t bother me at all since it was really only going to be  a half day. 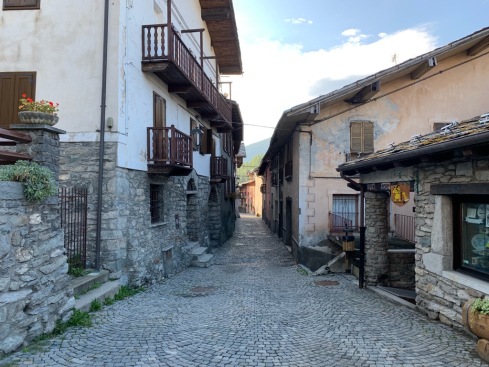 Walking today was definitely different than the past few weeks. I actually got to stretch my legs. There was a lot of flat-ish, but there was also a lot of down, and some fairly steep. We’re still descending through the valley. I think I went down 900m today. My knees are doing ok. My legs are also ok-ish. And my feet, well my feet have been doing remarkably well the past few weeks. I thought maybe they had been miracle cured, either that, or my knees just hurt more and I didn’t notice as much. But I think it’s just that there has been little to none road walking in the mountains. Stony, mountain paths are what my feet like. Today there was a lot more road walking, and my feet started complaining again. Ah well.

The path is fairly well signed. There are several different markers that show the way. There are yellow sign posts, like for the TMB and AV1, that give time estimates. There are little Rome stickers with arrows. There are red and white GR like markings that say Via Francigena, and there are local route 103 markers. I’m curious about how long that one will last.

There is one thing they could take from the French, and that’s marking the wrong way to go. There were a couple of times the trail turned sharply, and if you weren’t paying attention you could have missed it. A big yellow x on a pole continuing in your direction would have been a good clue you missed something. 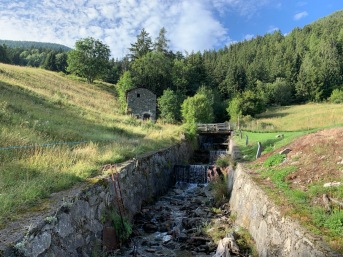 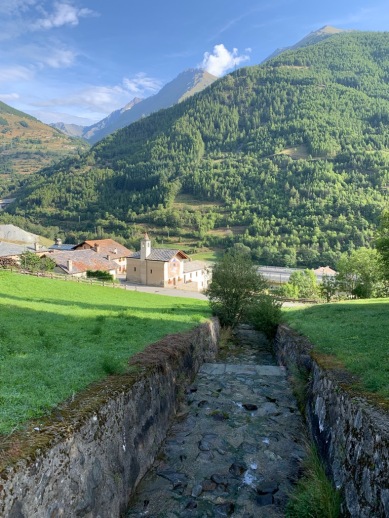 I was wondering how the path was going to work, but they did a mostly good job of keeping us off the main roads. For a good part of the morning I was on a forest type path along the side of the mountain. I think it stayed kind of flat while the road went down, so by the time I had to go down into a town, it was fairly steep.

It was nice because it was shaded, but it didn’t give a whole lot of views of the valley. Some did open up, and they were gorgeous. 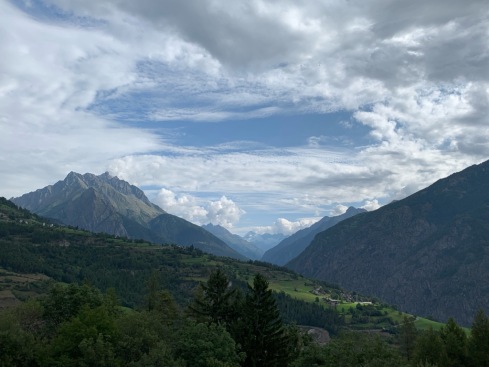 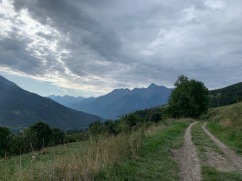 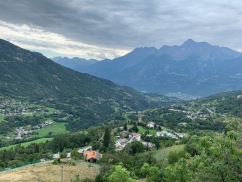 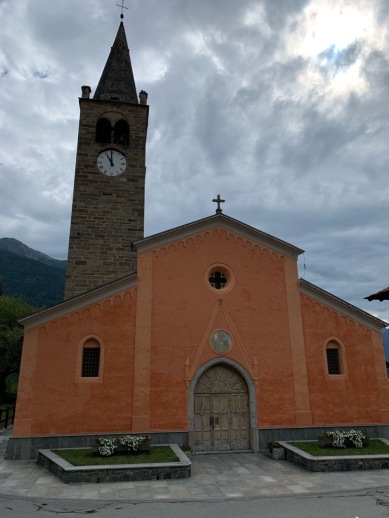 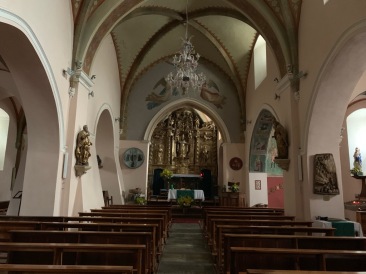 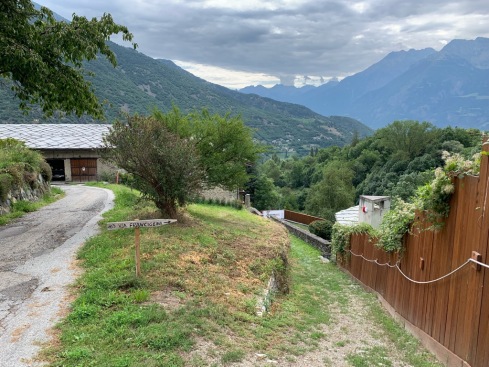 I had started emailing a hotel last night about staying in Aosta. This morning I got a reply back that I could check in early, they would drop the key for me outside the hotel in the letterbox. That was super nice of them.

I am thinking about staying two nights, but I’m not sure yet. Part of me thinks it’s a great idea. Another rest day while I’m recovering could really help. Also, I need good WiFi to try to figure out the route. I realized yesterday that the app I have and the book I have are terrible for actually planning distances. They only give distances by stages, and nothing in between. Seriously, who designed this? So I might need some more time to download some other tools, or idk.

But then part of me just wants to keep going. I do need to figure out how many days I have left and what is realistic.

Getting here early helps, but I also kind of want to take a nap, because I’m still not 100% better.

There was a lot of more road walking as I got closer to Aosta. I went through a lot of little villages. 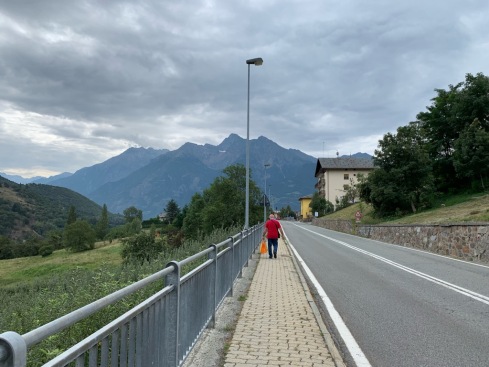 I got my first “Buen Camino!” From a little old man on a bike. He was adorable.

I got into town and went by a church, so I stopped in. Then I went to the cathedral, but it was lunch time and it was closed. It’s open from 2:30 to 7. 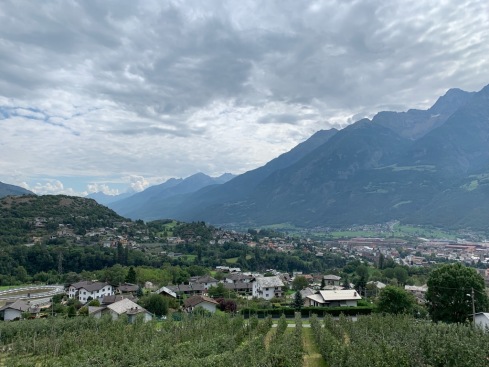 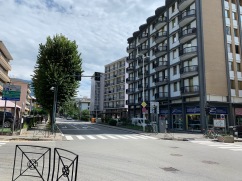 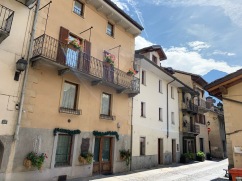 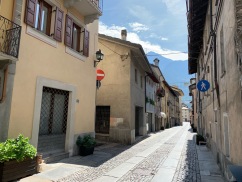 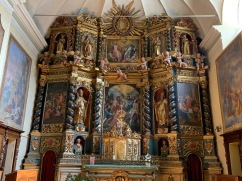 I was debating between two hotels. The one I picked was cheaper and quite a bit out of center. Well, hopefully it’s cheaper. I will find out. The price on the back of the door is not what was online, but I think they rarely are. I saw a sign for the other hotel serving lunch, a menu del giorno, which I think they serve here only during lunch. So lunch time is the best food deal, which is unfortunate for me. I wasn’t meeting anyone at the hotel anyway, so I decided to stop for lunch. The little cafes on the street were packed and busy. This hotel was completely empty for lunch. There’s probably a reason for that. It was a cheap menu, but also really not very good quality food.

I got the tagliatelle with vegetables, which was boxed pasta with a lot of olive oil an a few vegetables. Then I got the Milanese cutlet, which was a super thin piece of breaded fried meat with a salad. It was all fine, but I don’t think I would call it good. But, the hotel did have a great location, so I might regret that part. 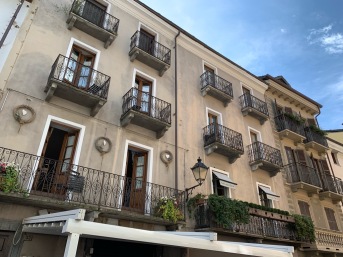 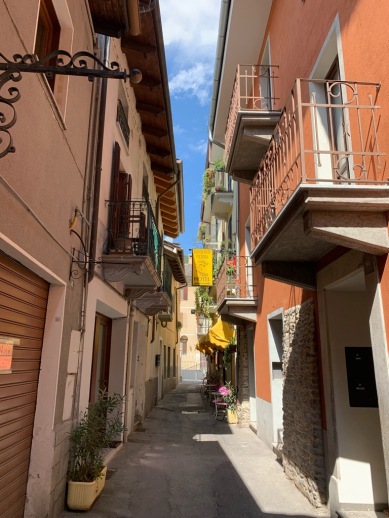 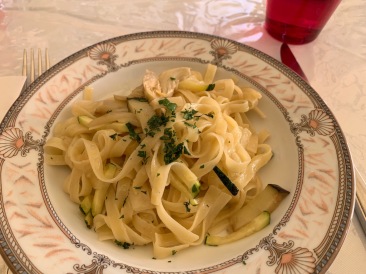 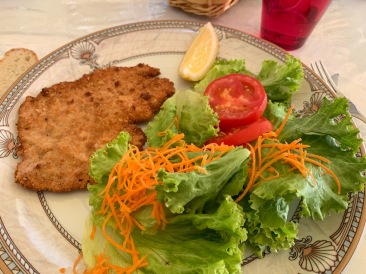 It took about 10 mins to walk to the hotel. I found the keys very easily and got into my room. I also managed to find the WiFi code, which is very important. 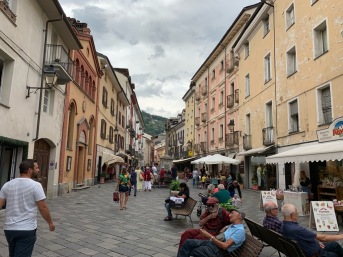 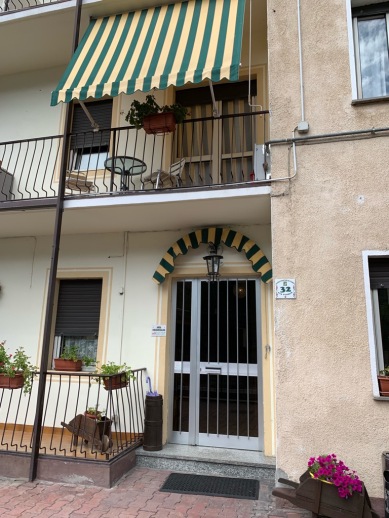 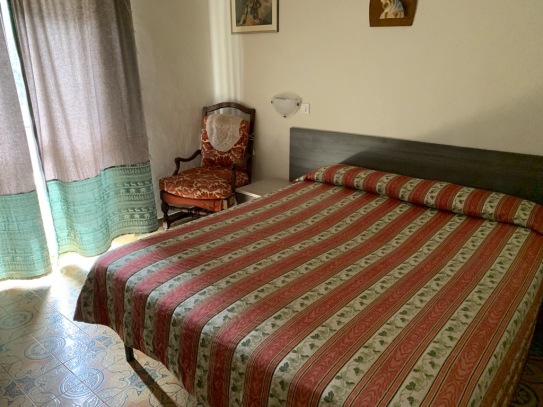 Most importantly the bed has a top sheet (maybe it’s just a French thing and the Italians want to be different) and so far it’s really, really comfortable! Now I just have to figure out if I’m staying two nights.

I spent a while trying to figure out the app and gps tracks. I finally did get it figured out. I have to download the .gpx files from the Via Francigena site, then convert them to .kml then open them on maps.me app. But I have to do them all individually. I was also incredibly tired but I couldn’t nap. I also saw on the Facebook group that a group of pilgrims was meeting at the cathedral for dinner at 6:30. I couldn’t do everything in one day.

I made the decision to take a rest day, and go be social with the other pilgrims for dinner. I knew that would shoot the whole night.

The hotel said two nights was ok, and I went off to the cathedral early to take some pictures.

Well, they were having mass, so no pictures, and I got there super early.

I wandered around a little bit taking some more street pics. 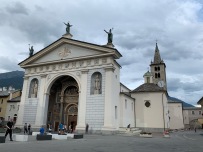 I met the group and we went to dinner. Gavin and Jill are a married couple from I think it’s New Zealand and not Australia, but I’m not totally sure. Terry is from Michigan/California. Ilse is from Germany and today was her last day. Marita is from Sweden. Everyone continuing is going to Rome.

Everyone got drinks ahead of time, and I wasn’t going to get anything, but the guy said they did have non alcoholic drinks on the menu. I got a virgin Mojito. Ilse wanted to know if anyone would split a fish in oil appetizer with her, and I said yes, even though I knew it would probably be awful. It was. It was difficult to eat. At least it was super small.

I got the burger, and it was the rarest burger I’ve ever eaten. Also a little difficult. But overall if was good. 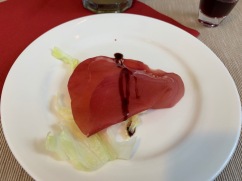 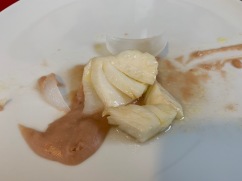 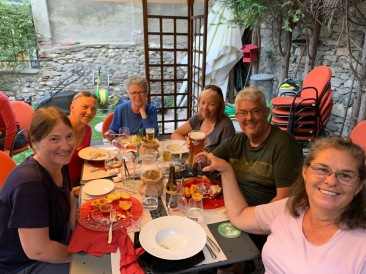 I was exhausted and really needing to sleep after the last two nights and being sick. I asked for the bill, but it still took over 45 minutes to figure things out and leave. They don’t split the bill here, so large groups for dinner are difficult.

It was completely dark by the time I started walking back to the hotel. Still, I’m glad I went, and I’m glad I’m staying tomorrow. 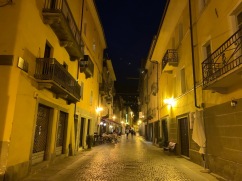