I slept pretty well. I woke up after 5 to go to the bathroom, but I couldn’t fall asleep after that. But it’s ok.

I’d set my alarm for 7. I got most things ready, then went to breakfast. I didn’t eat quite as much as I did yesterday. It was all still very good.

I finished packing and went down to check out. The first night was booked on booking.com, and was 103 E. My second night was 80 E. Booking gets quite a commission. So it was about 90 E per night. Expensive, but I think it was worth it.

I do think I felt a little better when I woke up. Last night I was a bit congested, so I decided I should stop at the pharmacy on my way out and get some Sudafed. I wasn’t really congested this morning, but I don’t know how this is going to progress. I was coughing quite a bit more this morning.

I got my stamp at the desk. There was a bit of confusion at first because she thought I meant a postage stamp. I need to remember it’s “timbro” now in Italy.

It looked like I was going to be a in a lot of shadow, so I put my jacket on, but by the time I got across the river and up the hill to the pharmacy, I was really, really hot.

I had assumed the pharmacy would open at 8, but they opened at 9. Luckily that was only 9 minutes away! I was certainly not in any rush today, it was going to be short, and I wanted to take my time.

I asked for actifed, and cough syrup. The pharmacist suggested cough drops, since the syrup would be very heavy for hiking. 12 pills of actifed and 12 cough drops was 25.15 E. Yup. That’s something that’s probably worth bringing from home!

I started out to find the route. I passed one of the UTMB start lines. They have a lot of different races. I also went by the church, which was open, but it was very dark inside. 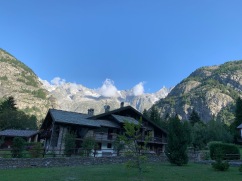 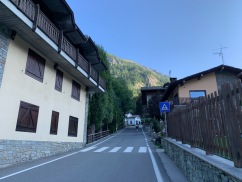 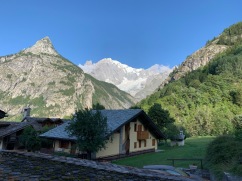 The road out went through a neighborhood, then it passed by a convenient port-a-potty, which I used. From there it was switch backs up the side of the mountain.

I took it very slow. I didn’t want to stress my lungs. Just slow and plodding. There wasn’t a lot to see. The view was mostly obscured by the trees. When the view did open up, I could see how far I’d come. I made it up with very little coughing, which was encouraging. I did have to blow my nose a lot. 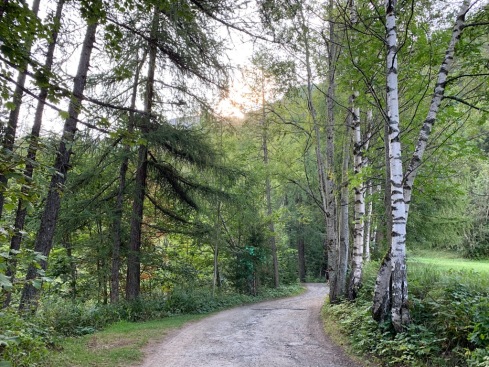 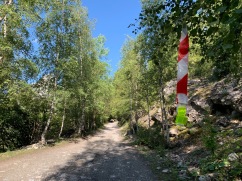 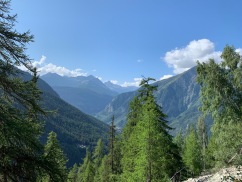 I got passed by pretty much everyone, and some asked if I was ok lol.

I got to the “top” where Rifugio Bertone is. The view is incredible! The tops of the mountains are cloudy, but it’s still beautiful. As I was standing there, admiring the view, the couple from Indiana walked up. They had taken a rest day as well. It was fun to talk to them for a while. 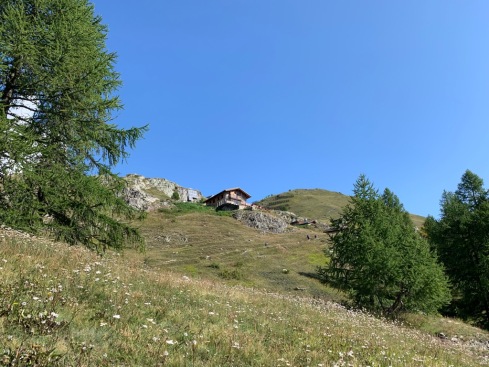 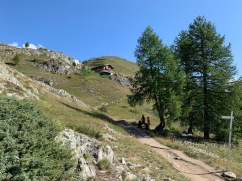 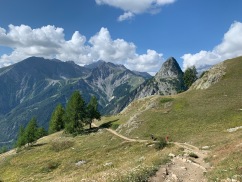 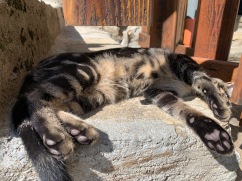 I went to the bathroom at Bertone, then started walking to Bonatti. It was relatively flat along this part, so I got to stroll. I tried to keep it very slow. Energy wise, I think I’m doing ok. 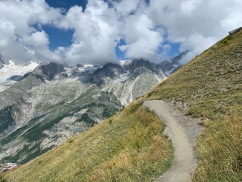 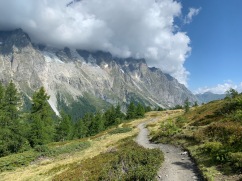 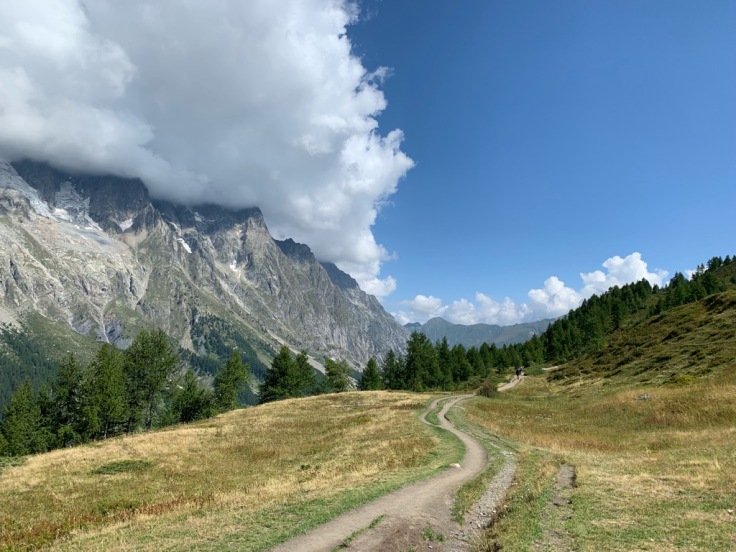 It was a gorgeous walk along the mountain. It wasn’t completely flat, there was some up and down, but it really wasn’t bad. Just another, really, really gorgeous day. 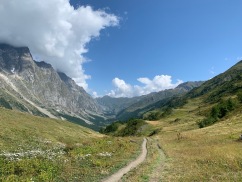 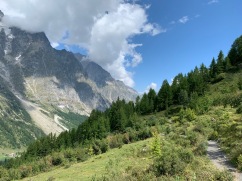 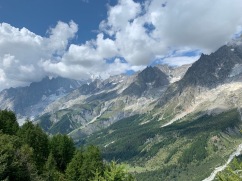 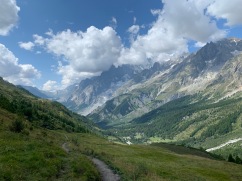 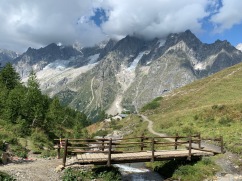 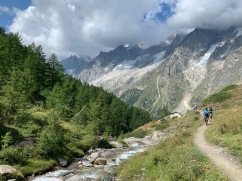 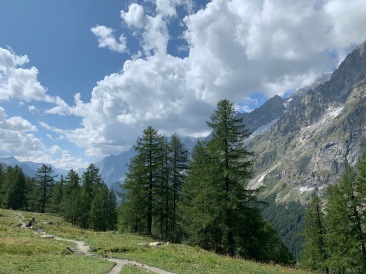 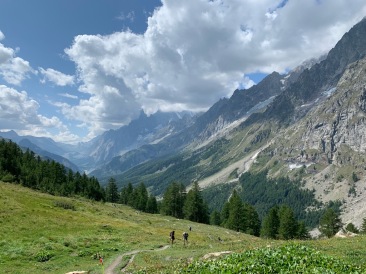 I arrived at Rifugio Bonatti about 2:45. Check in was strictly at 3:30, so I decided to get some food. They didn’t have anything written on the board, so I asked what they were serving. Soup, sandwiches, or tart. I went for the soup. It was a bean and barley soup, and really the worst thing I’ve had since being here. I still ate it. I mean, it was horrible, but it wasn’t very good. And it was 12 E. But I think maybe extra calories will help fight the cold. 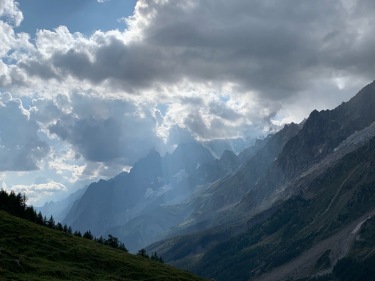 I was second in line to check in at 3:30. It’s a short day for people coming from Courmayer, I mean, I made it in just over 5 hours, and I was walking reallllly slow. A lot of people were waiting around. They have tokens for hot water in the shower, but I think it still helps to go first, which I did. I had plenty of hot water, and I didn’t even need to use my coin. There was enough left over from the shower before mine.

Tomorrow is going to be a very short day, but I think it’s a good thing I’m splitting it up.

There are signs for the Alta Via 1 to St. Rhemy, so that is very encouraging. It doesn’t look like I’ll get lost tomorrow. I had been a little worried about how well it was marked, but it must be a fairly popular trail for it to have markers just like the TMB.

I lay down and I do think I dozed a bit. I coughed, a lot.

Dinner was interesting. It was the most vegetables I’ve had in the mountain huts. The first course was a curried salad. Then that awful soup. It was much better when I added a ton of pepper. It just wasn’t well seasoned. It had some rosemary in it, but it needed about 10x more. Then the main course was a quiche, mashed potatoes, and Swiss chard. The dessert was the smallest amount of yogurt I’ve ever seen.