The party lasted I don’t even know how long. I woke up around midnight to go to the bathroom, and it was still going on. Thankfully, even though I could hear it through my earplugs, I was still able to sleep. Freddy had told me he snored, but thankfully it wasn’t too loud or too long. I woke up a lot, but I still slept ok.

It was fun to have another pilgrim companion, but it could get to be a lot, quickly. Freddie was quite genial.

Apparently the WiFi connection was better outside of the reception area. If I had known that, I wouldn’t have wasted almost two hours sitting there trying to load the booking app. This morning at breakfast I went to check my phone and it was magically there. I checked on the expensive hotel, and sure enough, it was back at 107E instead of 122E. I didn’t purchase it right away, because I hadn’t brought my book and I was afraid of messing up the date. By the time I went to confirm, the price went up to 118, but when I hit back, it went back to 107. I went ahead and booked up. Freddie wanted to help me find other accommodation, but I honestly don’t know if there are any within walking distance. The hotel was listed on a site specifically for accommodation for the GRBL, and if there were other, cheaper, options, they would have listed them.

I told Freddie it was too late and I’d already booked it. He told me it was a mistake and I wouldn’t fit at the hotel. I don’t know how I feel about that.

I got on my way about 9 am. It was a beautiful day, but very hot. I was hoping the rain would cool things off, but it got hot again as soon as the rain stopped. 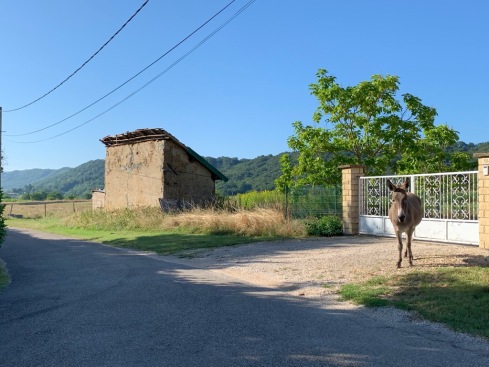 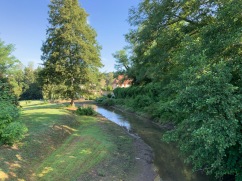 It was a lot of road walking, but I still did pretty well. My feet started hurting pretty early. I’m having some pain in the bones above my arch. I need to try massaging them a bit. I really hate having my feet rubbed, but it is more tolerable when I do it myself. It might help.

The good thing about being back on the main way is that most of the churches are open again. I got to see 3 churches today.

I do feel like I’m falling into a kind of rhythm. My feet hurt, but the other things seem to have gotten better. I don’t think I’m having any trouble with either of my hip flexors. I haven’t been having the muscle spasms in my legs. My knees are still a bit twingey on the steep hills, but still, I think I can aim for the Alps. Finding accommodation could be tricky as well. I really hope it all comes together.

I did pass a few pilgrims today. I saw one lady had a shell on her bag. I turned around to take a picture, but she also turned around and caught me. We both laughed.

I got a phone call from the hotel telling me the restaurant isn’t open on Monday nights. Hopefully there is something else within walking distance. I think a nice hotel will be a nice treat.

There was a bit of up and down, but then it got super flat for a white before Saint Genix sur Guiers. That town was quite lovely, and it would have made a nice stopping place for lunch. I was there at the right time, I just didn’t want to eat. Part of me says, “you’re in France, you should eat all the things every day,” but then why should I force it if I really don’t want to eat? I still think that might change, and I’ll start wanting lunch. But I might be out of France by then. 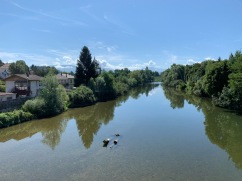 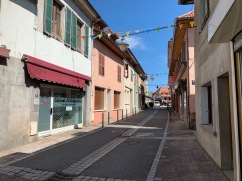 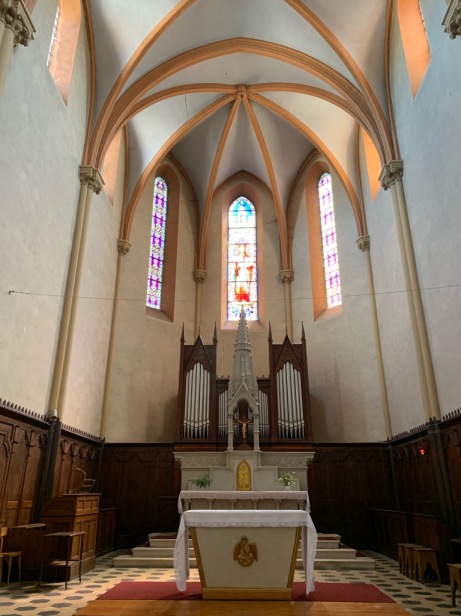 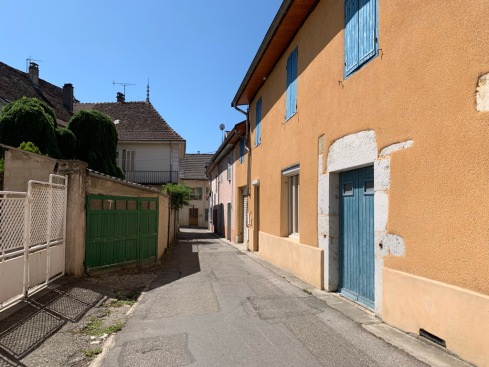 There was another little chapel at the top of the hill. 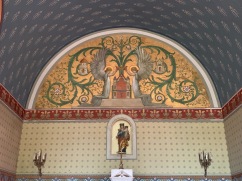 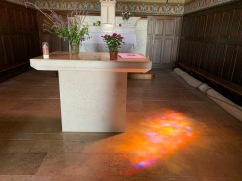 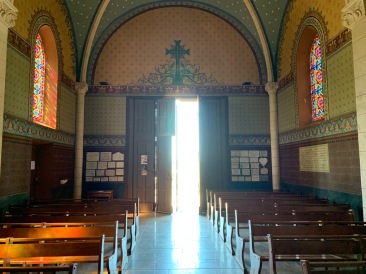 Right near the end was pretty much straight up a mountain. It was hot and I got really sweaty. I passed through another town with an open church on the way up. 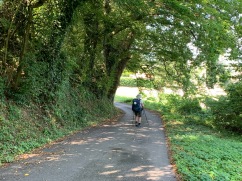 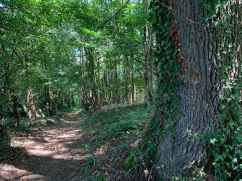 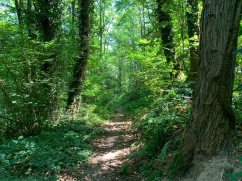 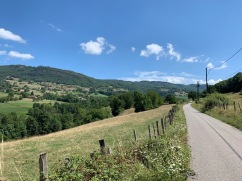 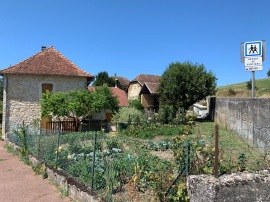 This town is a crossroads of the GR 9 and GR 65. They go together for a while tomorrow. The Gîte here is huge. Several rooms and several dorms. I’m the only one here tonight, but apparently she’s getting a large group tomorrow, so wants to start cleaning early. It’s a good thing I have 30k to go tomorrow, because she wants me out by 7:30 or 8. I said I’d take breakfast at 7. 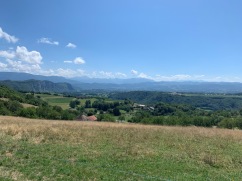 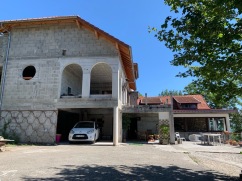 last night I didn’t get to hang my laundry in the sun, so I didn’t completely dry before I had to bag it. I hung it out right after I got here, and by the time I got out of the shower it was nice and dry. I didn’t like the idea of putting on slightly damp undergarments. It’s a good thing I have a large towel!

I sat out under the trees for a while. My feet really do hurt. I decided to take a prednisone right after walking and see if that helped. It’s been a few hours now and I don’t notice a difference. I’m not sure what is the best way to use it.

The WiFi calling is working here, so I called Jenny for a bit to catch up and see how Maddie is doing. Apparently Maddie is having a bit of anxiety, because she’s started ripping up her toys. She hasn’t destroyed a toy in 4-5 years. Hopefully she forgives me. 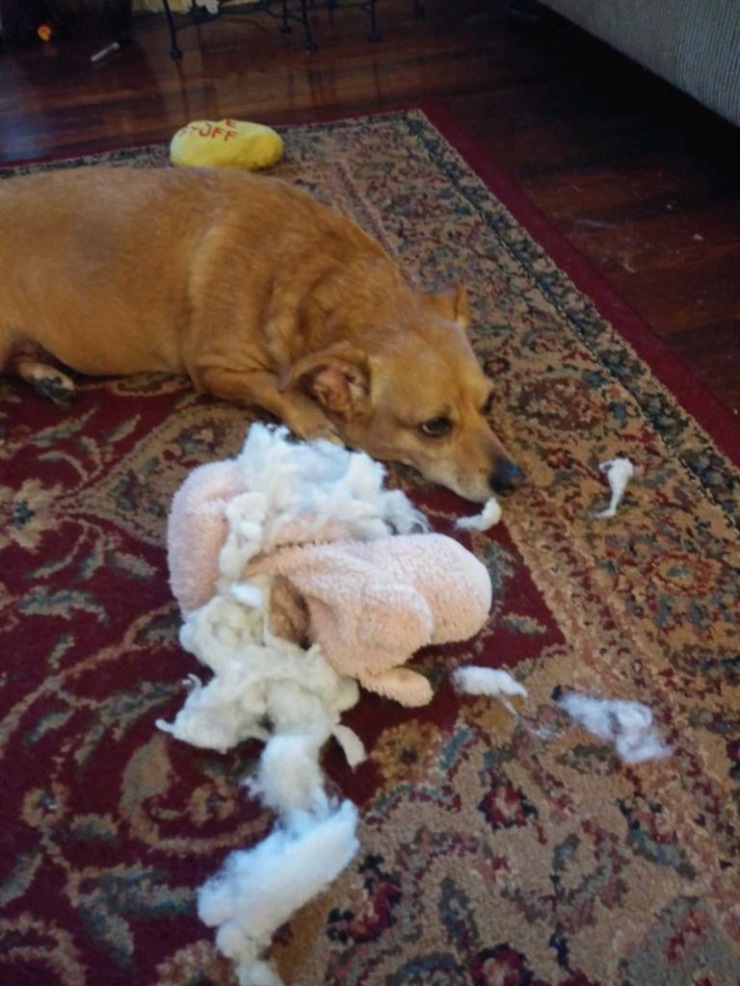 I’m 1/6th of the way done! That seems strange. The first Camino felt like it took lifetimes. I think it feels different so far. Maybe it’s because I have less people interaction? I’m not really sure.

My host, Chantal, says tomorrow is supposed to be very beautiful. I’m excited.

So I met Laurant. Using the translation app, Chantal told me he’s staying with her for the week while he hang glides during the day. I wasn’t sure that was accurate but it is! Apparently there is a very good school nearby. And I can see why. This area is beautiful. Laurant knows some English, so dinner was a lot of fun. Apparently the Gîte has had a dearth of pilgrims since Sunday, so Chantal had been telling him to wait for the pilgrims, but he didn’t believe the actually existed. He also didn’t believe pilgrim appetites existed, because apparently Chantal was making him too much food for dinner and he couldn’t eat it all. I demonstrated a proper pilgrim appetite.

Dinner was delicious. A yummy salad and melon, then Osso bucco with polenta and cheese. I’m not sure that I’ve ever had proper polenta before. I had two helpings. The cheese was excellent. Dessert was tiramisu, so apologized profusely and got a lemon yogurt instead. 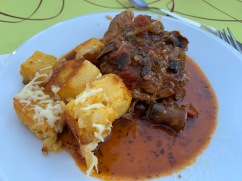 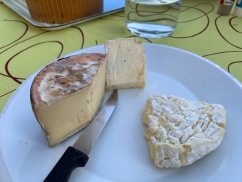 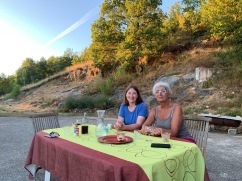 Afterward, Chantal said we would get in the car and so see a natural special. Yes it was! An amazing panorama overlooking the Rhône. What a treat! And Chantal took an amazing picture for me. 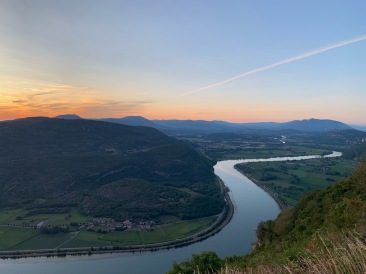