I hung my laundry in front of the window to dry, so I left my window open over night. I woke up around 4:30 I think? I was hoping to get more sleep, but the rooster started crowing about 6 times a minute until after sunrise. It was then that I discovered the window didn’t close. I didn’t want to force it, for fear I would break something. I would have liked to have slept more, but it was enough.

Breakfast was basic, but good. I have to say, the price in my book was wrong. It said 40 SE. SE is step etape, which means dinner and breakfast, basically the same as DP Demi pension. It was 57 E, so quite a bit more. I hope my book isn’t that wrong too much more. I don’t think this place was worth 57 E.  I paid less than that for the AirBnB from heaven.

I tried to put it off, but I had to leave. I was out the door by 8:40. It was cool at first, but did get quite hot very quickly. Because I didn’t have very far to go, I took it easy.

Right out of La Frette I ran into 4 pilgrims coming the other way within 2 minutes of each other. The first guy might have been Dutch, and told me in English I was going the wrong way. I said, “yes, I am going to Rome.” “Rome? You must have been to Santiago already then.” 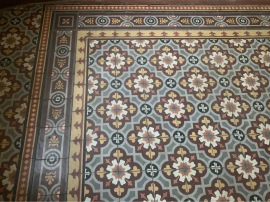 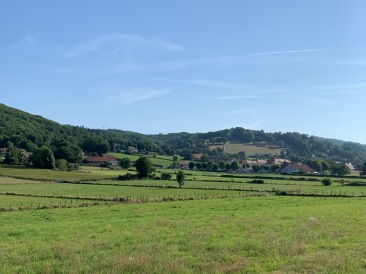 I knew that at the beginning, going the wrong way, I was going to be by myself a lot. I knew I probably wouldn’t really meet any pilgrims for real until Italy when I was moving with traffic. It doesn’t bother me that these first few weeks are just me and the walk. But, it did make me smile a lot to see other pilgrims. Because I saw so many so quickly, I thought for sure I’d see more. I only saw two more the rest of the day.

I can’t tell you how happy I am to be back on the GR 65. The route now shows up on my map again, so I don’t have to guess where I’m supposed to be. I did check my position often because of what happened yesterday, but I really didn’t need to. There is only one GR right now, and it’s marked very well.

The GR 65 was on a road through several towns, and fittingly it was called Chemin du Compostelle. But the road finally took a turn up the mountain on a stony path. I was glad to be off the pavement. I really am not sure why stony paths are so much better. This was the longest, steepest climb I’ve had yet. I’m not ashamed to admit I had to stop and catch my breath and rest a bit several times. It just kept going up and up, super steep. If you look at the altitude profile on the map summary, it looks like it goes straight up. My ears popped several times. My knee started having a bit of a rough time, but thankfully it wasn’t every step. I think things are still ok for now. Hopefully they will hold out through the Alps. 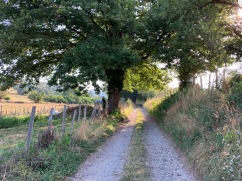 As I climbed, I was thinking about Mom. I’m so glad I can breathe, and I’m so glad she doesn’t have to struggle to breathe anymore. It must have felt so freeing. I’m glad that I can be here, doing this.

After making it to the top of the stone path, there was a bit of a farm. They are keeping some kind of deer. And then the road went steeply up the mountain even more, and my ears popped several more times. 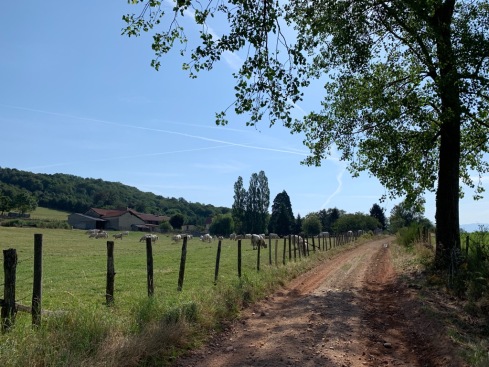 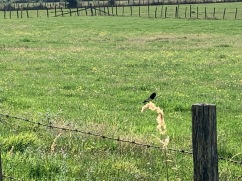 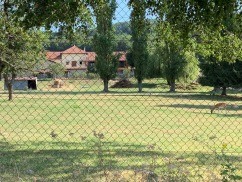 On the way down the other side, I finally found some ripe raspberries. So many raspberries. I could get in trouble spending all my time picking them. Later I passed a patch that had a lady with a bucket collecting them. I don’t think any of mine would have made it into the bucket.

I passed a sign that said I was .6 km away from Rome! I didn’t know I was so close already. And somehow I missed it, because I sure didn’t see anything.

Got into Le Pin as the Church rang 1. The church was open, so I went to sit inside for a bit. I probably could have gotten something to eat, but by the time I left the church it was 1:30, and I really wasn’t hungry. They said I couldn’t arrive until 4, so I was trying to kill time, but I wasn’t doing a very good job of it. My Gîte is at Le Pin de la Plage, which is a lake. Unfortunately it’s about 2k downhill to the lake. That means tomorrow is going to be a very long climb out on a road, but at least it should be cooler. I think it got into the high 80s. 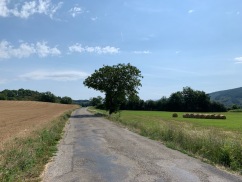 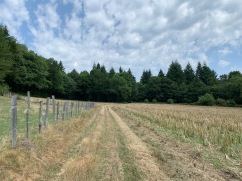 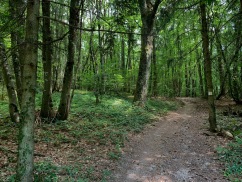 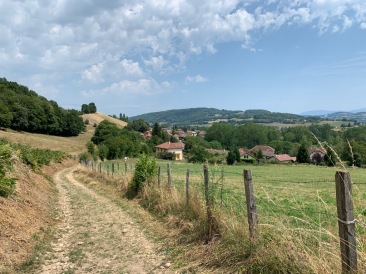 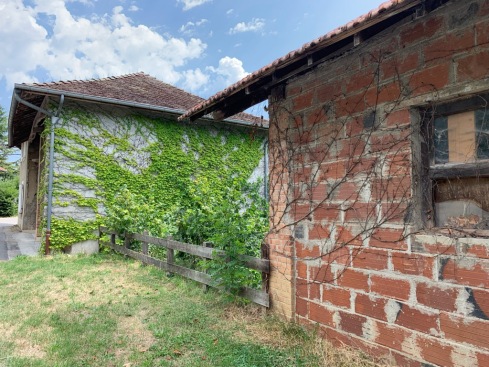 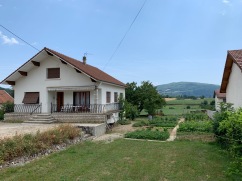 I found the Gîte right around 2. I looked around for a place to sit in the shade but there really wasn’t anything. I went and sat in the sun overlooking the lake, but there’s only so much of that you can do. I wandered around in front of the Gîte, trying to figure out which was the entrance, when a little old lady came out and asked my name. I said who I was and that I was early, but she said it was ok. Yay! I’m glad I didn’t have to sit in the sun for another hour and a half.

I started to ask where the clothes line was, but she offered to wash the clothes for me in a machine. I don’t know if I’m being charged for it, but I don’t really care. They could use a good wash! 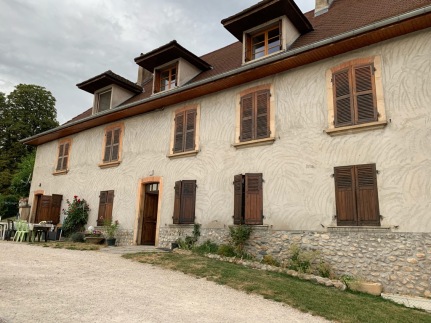 I think the bed is memory foam.

My feet did a lot better today. This morning they felt much better, but I took the prednisone anyway. I think maybe next time I’ll take the prednisone after walking. They hurt so bad yesterday. I was afraid of it keeping me up if I took it too late, but the only way I’ll know for sure is to try it. Today ended up being about 19k. The roads were mixed enough that it was ok.

I’m still trying to decide if I should take a full rest day soon or not. It’s hard to figure out. None of the towns I’m going through now are very big. There wouldn’t be a lot to see besides the inside of my room. Plus it’s just hard to know when I’m actually going to need a break, and you really have to book ahead here. I am trying to take some shorter days.

I spent most of the afternoon looking ahead. I have some uncertain days, and an uncertain route in general. Ahhhhh.

The aperitif started outside at 7:15 and went to 8:00. I had grapefruit juice. There were olives, cashews, funions?, pretzels, and something like Pringles. The lady next to me was trying to help my French, but she kept using words I don’t know, so I could only get half meanings.

11 people at dinner including two kids. First was a tomato and egg salad, then pork, green beans, and gratin potatoes. Then a cheese course with two different ages of Comte. The older one is drier. Then a super delicious raspberry tart. I was going to take a little seconds on the potatoes, but ended up with seconds of everything that was bigger than my first helping. I am so stinking full. And really tired. I will have to post in the morning if I have time. 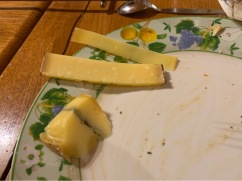 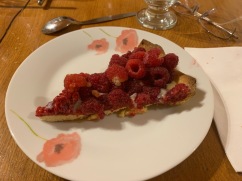