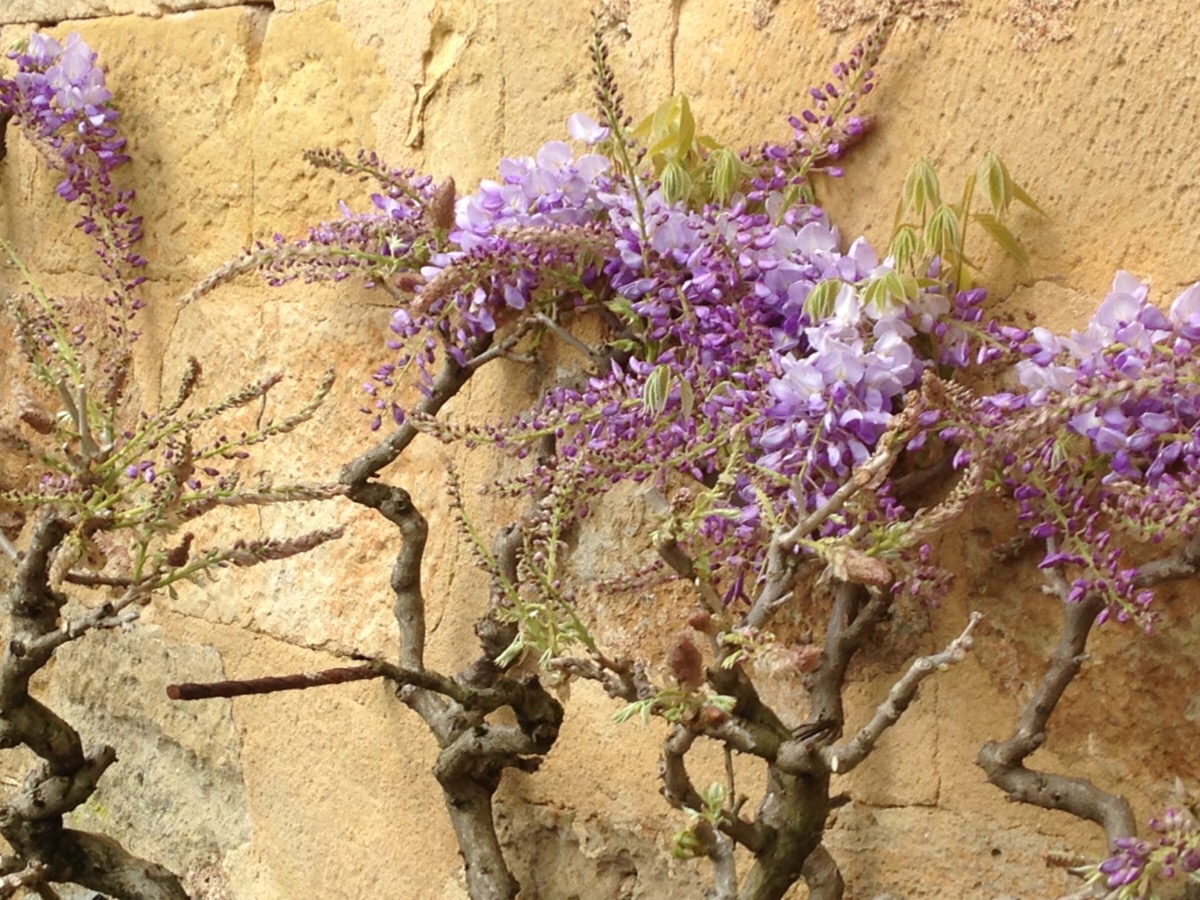 We had breakfast at the hotel, and Heidi thought the breakfast was much better than the dinner. I didn’t think dinner was awful, but it wasn’t that great, either. Definitely not compared to other dinners we’ve had.

We drove to Hautefort and found the chateau. It’s the one from Ever After, which is pretty much a perfect movie. We love everything about it. When we went to Chenonceau, it reminded us of the movie, so we decided to look it up and see where it was. It’s not in the Loire Valley, so we would have to drive 3 hours out of the way to go see it. Actually, 6 hours, since we’d have to go back the other way. But, we love the movie so much it was a no brainier.

It did not disappoint!! I’m really looking forward to watching the movie again now that I’ve seen it, and to see how they use it in the movie.

Like every other chateau in France, it’s undergoing some renovation, so there was some scaffolding. I don’t know how much, if any, of the inside of the castle was used in the movie. It does look very nice, it’s just not the same time period as the movie. 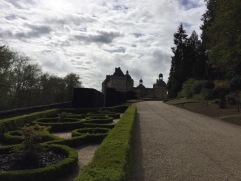 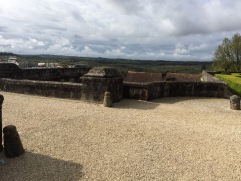 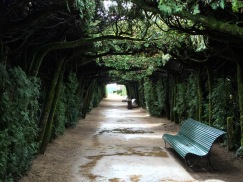 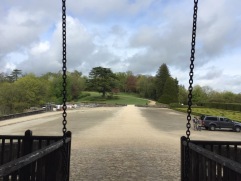 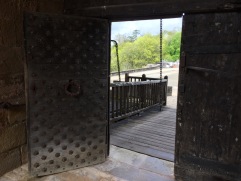 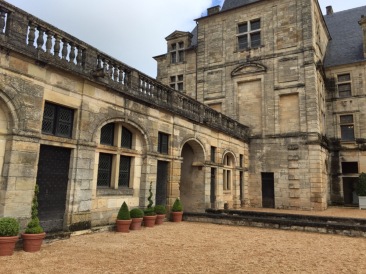 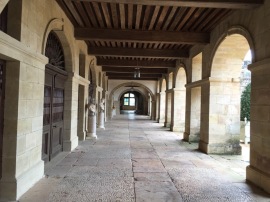 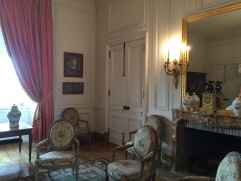 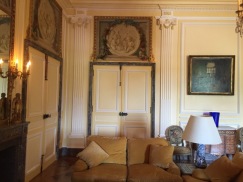 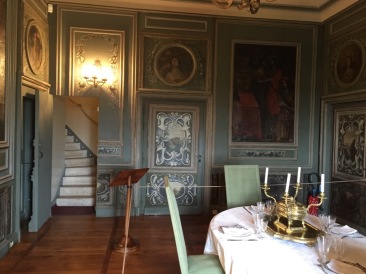 The gardens are almost pure topiary. Hardly any flowers at all. I really, really liked it. 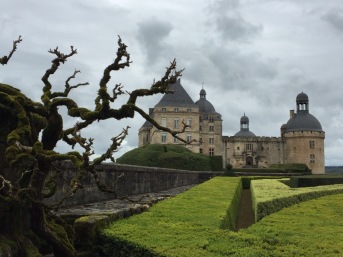 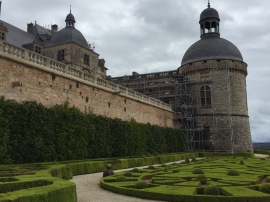 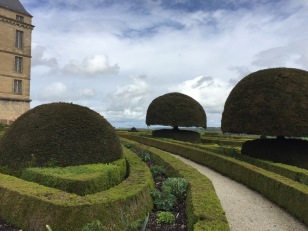 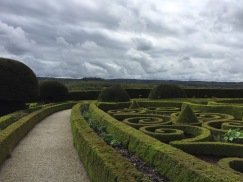 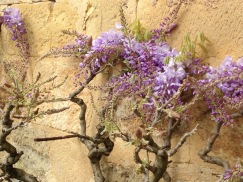 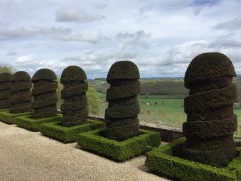 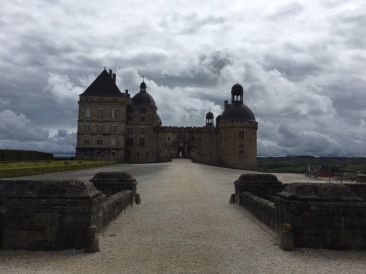 I got several souvenirs at the gift shop.

We had a long drive in front of us, so we started driving before having lunch. We didn’t get very far, though, since it was already after 1 pm. We ended up stopping in a small village, and I have no idea which one. The restaurant was named after the post office, which was next door.

It looked like half the village was there eating a family style lunch. We asked for lunch for two, and he just brought us food. It was just like the Camino! We didn’t order anything, but he did ask us how we wanted our steaks cooked (which apparently I did not get a picture of.)

It was Heidi’s first experience with a full 5 course meal, and she loved it!

First course was a soup, which was delicious. Then there was some duck tuna with pickles. It tasted like tuna but was duck, and the pickles were really good. There were even some pickled pearl onions. Then we had steak and fries, then a cheese and salad course, and an apple cake. Everything was served family style, and it was only 12.50E for the meal. It was great! 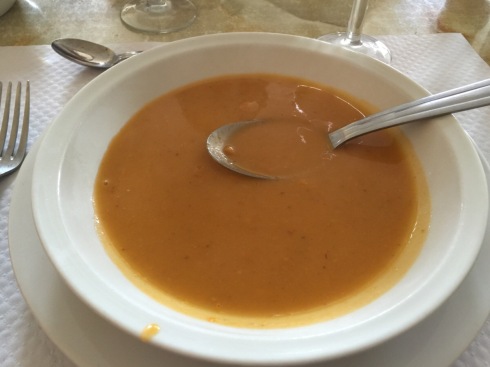 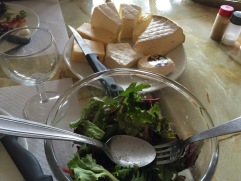 We had 6 hours of driving ahead of us. We decided to stay in Rennes. It rained really hard for the first 3 hours. We decided that since we had so far to go, we would go on the freeway and pay the tolls. The first two tolls were 4.50 and 7.50, and when the 3rd toll came, we knew it would be more, but we weren’t expecting 28.90! We paid 40E in tolls today. Gas is also very expensive. We’ve been paying about 50E for 3/4ths of a tank. However, it’s nice to have the freedom and flexibility of a car.

After a very long day of driving we got to Rennes at 8 pm. We started looking for a grocery store, but the gps was having some trouble. We drove around for 1 hour going to 5 different stores that weren’t there. We finally found a store, but there was no parking. Heidi ran in and got a few things, but we didn’t get any food like we had planned to.

We checked in at the hotel after 9 pm, but luckily there was a restaurant right next door that was still open.

I got a pizza and Heidi got a goat cheese burger. 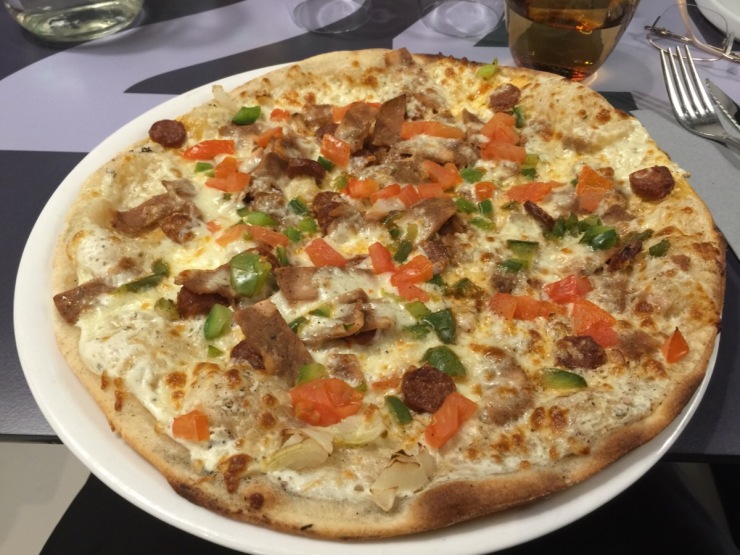 We are planning on sleeping in a bit tomorrow, since we only have an hour and a half to drive to Mont Saint Michel!