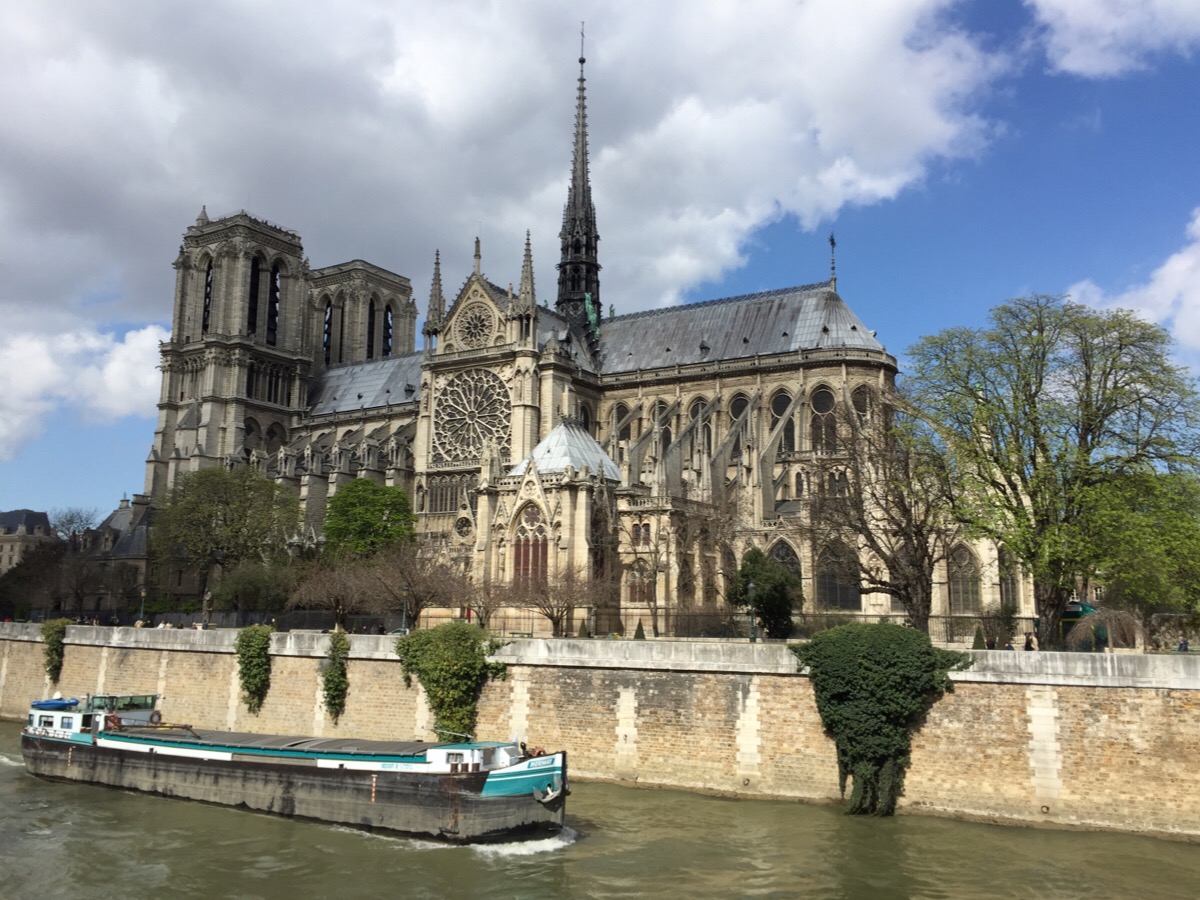 I can’t believe I’m back in France, already!  It’s only been 7 months since I started the Camino.  No Camino this time, but I’m sure there will still be lots of walkin involved.  My friend Heidi and I had been talking about going to France, and when I got back, she insisted on setting a date to go, so here we are!

The flight was actually ok, kind of. It was maybe only half full, if that. Heidi moved and stretched out over a whole middle row, and I had two seats on the window to myself. The problem started when most sane people on the airplane were trying to get some sleep, or at least being quiet and respecting those who were trying. Unfortunately, the only two people on the airplane who were talking were right behind me. Actually, it was the guy talking, non-stop, and the woman probably said 10 words to his every 1000. Thankfully, they did decide to stop talking after about an hour, but that left us with only two hours to get some sleep.

All too soon we were arriving in Paris, 45 minutes ahead of schedule.

We went through customs, then picked up our bags. My customs guy didn’t say anything to me at all.

It’s Heidi’s first time out of the country besides Canada, and I haven’t been to Paris in 25 years or so, so it’s a new experience for both of us.

We took the train into Paris, then found our hotel. We weren’t able to check in yet, but the reception guy was wonderful and so helpful. He put our bags in the storage room for us and gave us many helpful directions and was a super nice guy.

It was a bit cold and cloudy, but Heidi and I walked around without out coats on, while it seemed like everyone else was bundled up.

The really great thing about having gps on your phone, you can just walk anywhere you want and not get lost, so we didn’t even plan where to go, we just started walking. We went to look inside Saint Ambroise, which is only a few blocks from our hotel. I went to open the door, and Heidi said, “are we allowed to just walk in?” Yup, that’s what’s so great about France. You can just walk right in the churches! (I’m still a bit bitter about Spain.) 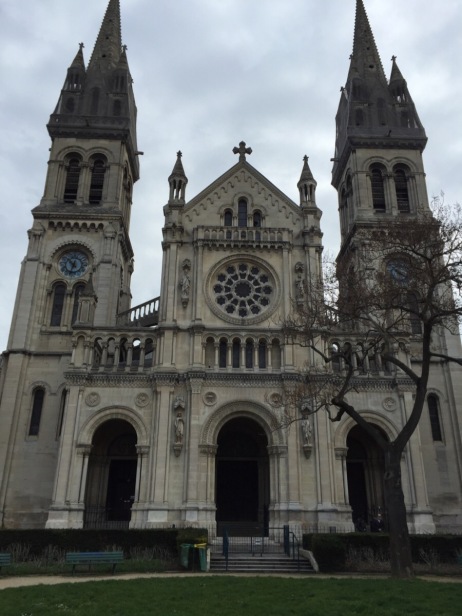 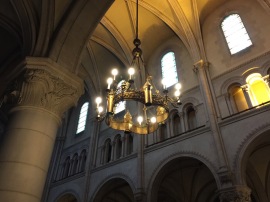 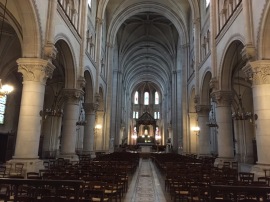 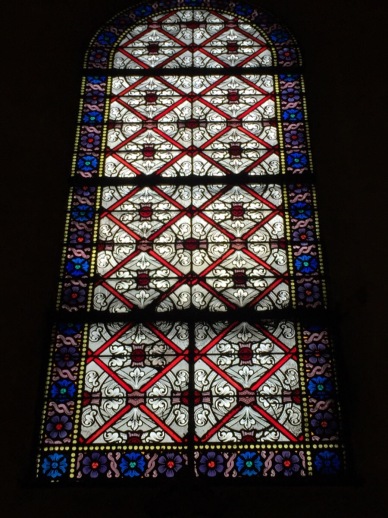 We ended up in a street market with all kinds of everything. Clothes, jewelry, and every kind of food you could want. And we did find something we wanted; Nutella crêpes! Finally, I got my Nutella crêpe.

Then we walked around some more and found some lunch. We both had mozzarella and tomato salad for the entree, and then I had duck and potatoes for my main, and Heidi got this thing that turned out to be very much like shepherd’s pie.


After lunch we checked in the hotel, then decided to head off to Notre Dame. We also decided to walk there, since the sun had come out and it was gorgeous, and we’re in Paris! Why take the metro all the time if you don’t have to? It was quite a distance, but it was wonderful. I love being able to just walk where you want, and see the things you want. 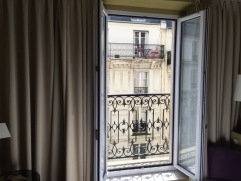 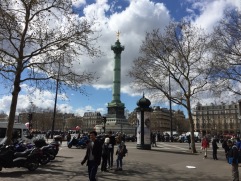 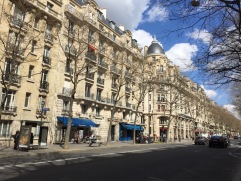 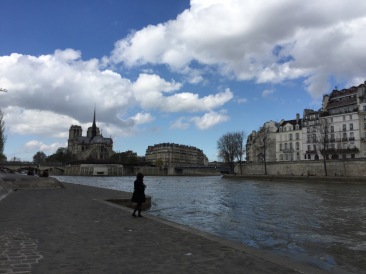 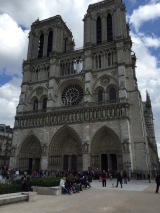 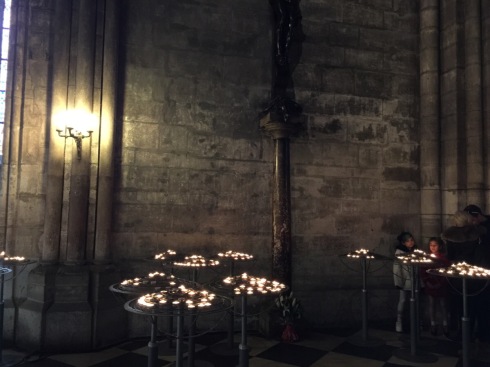 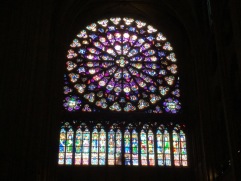 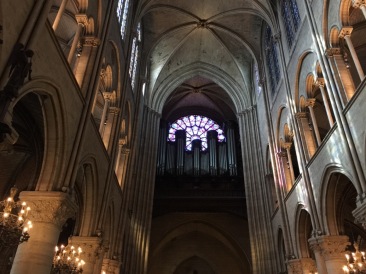 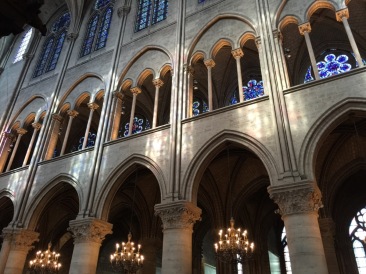 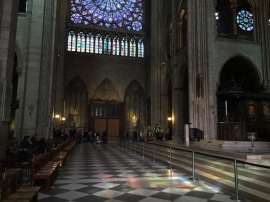 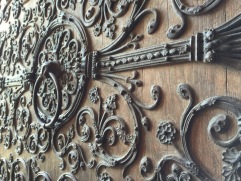 Notre Dame was crowded, and the square in front of it was even more crowded. We got approached by a gypsy type person who wanted us to sign a petition thing for blind and deaf people, but it’s some kind of scam.

There was an adorable terrier who was chasing pigeons, but then a man tried to kick the dog, and another man yelled at him, and it seemed like something might happen, but everyone calmed down. I got it on video. The dog was adorable.

The pigeons are in mating dance mode, with the males chasing the females around trying to show them how awesome they are. I remember the last time I was here really wanting to touch a pigeon. I don’t feel the urge quite as strongly now. 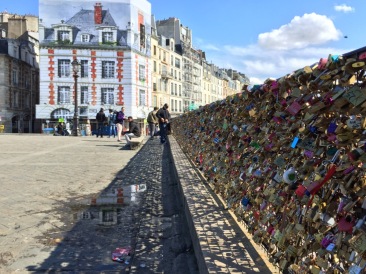 We headed down the city island to catch a river boat tour. It was nice to sit and watch, but we were starting to get tired at this point, and stopping moving doesn’t help.

Also, I could tell I was starting to get some blisters. I had foolishly decided I didn’t need to wear liner socks, since it wasn’t the Camino, but we’re still walking miles every day! Also, and I had been afraid of this, but my poor feet couldn’t take very much before they started feeling like the Camino had never ended. I signed up for the marathon this year, but I’m wondering if I will even be able to train for it. My poor feet were just pulverized on the Camino, and I don’t know if they will really recover! I thought they had, pretty much, but I also hadn’t done much walking to test that thought.

Hopefully they won’t get too upset on this trip, but as I’m sitting here typing this, they’re still throbbing.

I didn’t take many pics from the boat. 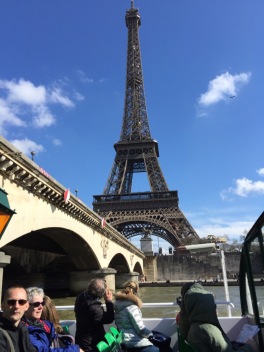 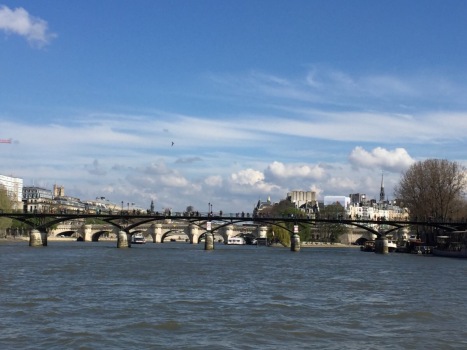 After the river boat tour we went to see Saint Chapelle. That one you do have to pay for. It’s 10 Euro, but it’s totally worth it. Absolutely amazing. It’s a small chapel, but filled top to bottom with stained glass. I remembered it was stunning, but memories and pictures don’t do it justice at all. 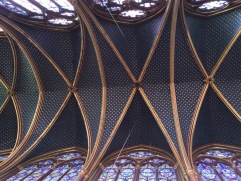 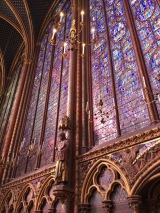 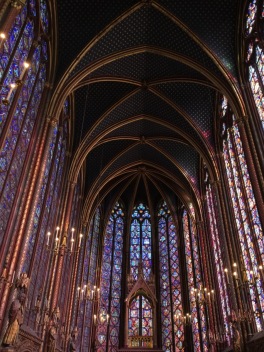 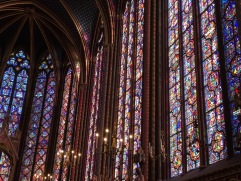 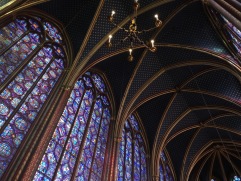 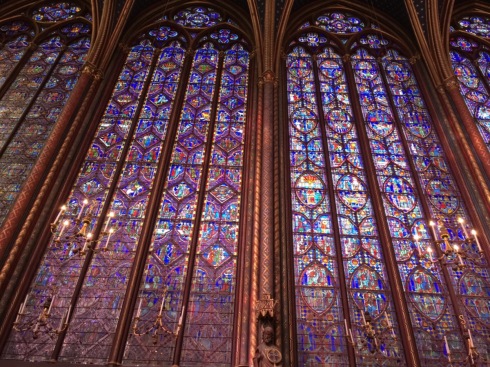 For some reason, we decided that it would be a good idea to go do the Eiffel Tower at sunset, except by the time we got there, it was still almost two hours to sunset, and we’re tired and hungry.

We decided to abort the Eiffel Tower for tonight, and took the metro back to the hotel, where we were extremely in-picky in the restaurant we chose.

I got a goat cheese and toast salad, and Heidi got a smoked ham and cheese and tomato and pesto sandwich salad thing. 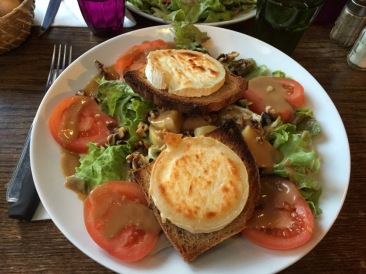 Here it is almost 10 pm and we’re still awake. That’s not going to last much longer though. We’re planning on taking it a bit easier tomorrow. We don’t want to go crazy. It would be nice if the weather continued to cooperate, though.