The bed was a little too hard, but I still slept pretty well. I slept in until 7:20, got a bit packed, then headed down for breakfast. Nicolo was just finishing up, so I sat with him for a little bit. I had colacao, juice, toast, and a pan con chocolate. I also got two bananas for the road.

I went back up and finished getting everything together. Last night I had gone though and tried to cut things I didn’t need to carry anymore. I cut out an electrical cord, a little jar of preserves I’ve been carrying since Figeac! a pair of liner socks, and the headlamp I bought and instantly regretted.

I also tore the previous pages out of the bad guide book I bought. It actually came in handy today. The stuff that I thought could be used by someone, I set on the bed instead of throwing them away.

I was out the door by 8:35. It was another gray day promising a lot of rain. It was a very slow climb, so slow it was almost flat.

In the next town I caught up with Jill and Steph who had stopped to get some coffee. I continued on. I don’t know if I will see them again or not, but I do hope they start having a better time.

After a while I caught up with George. He had stayed in the same town, but in the other albergue. The promoter guy got to him. We saw someone coming toward us, walking the wrong way on the camino. George stopped him to talk to him. He’s from France, and he walked from his father’s house in Cahors, and now he’s walking to his home in Bordeaux. George was asking him all kinds of questions. He asked him if he’s had any great experiences, and he said, “Yes, but they are mine, and others have theirs,” and I was very pleased that he didn’t really answer. What I really like about the camino is how individually and intensely personal it is. I’ve had experiences that I’m not going to share with anyone, because they were only for me.

At this point I was reminded again of why I didn’t really like walking with George. We ran into Nicolo. He opened his bag, and he had my socks and headlamp and power cord! He lady had found them on the bed and thought I left them behind, so she gave them to Nicolo to give back to me. Oh well. I’ve never tried to lose something and had it returned before.

Thankfully, Nicolo was able to distract George while I made my escape. It was actually quite easy. The terrain started picking up, and for some reason I seem to go faster uphill than I do flat. And it was such a nice uphill, too. Either it was nothing like France, or I am in great shape.

I had also been hoping that I would get to spend most of the day alone today. It was a beautiful day for it, and I would also be passing the Cruz de Ferro, and I wanted to be alone for that.

It rained. It was also very foggy in some places, but the fog cleared enough that I was still able to see the mountains. I’m sure it’s beautiful on a clear day, but I thought it was still pretty gorgeous.

I passed through Rabanal del Camino. It looked like a super cute and fun town to stay in. I bet it’s really popular during the summer. I passed a church and the door was open. There was a curtain hanging in front of the door, and behind the curtain was a gate. At least I got to see inside, and it was free!

I didn’t stop and kept going, mostly because George had mentioned he was going to stop for a bit in the next town, and I wanted to stay ahead.

I stopped in Foncebadon to have lunch. I got a platos combinatos for 6 E. They were also playing the same Enya album I have in my car.

After lunch I felt refreshed and ready to see the Cruz de Ferro, which wasn’t very far away. I could see someone ahead of me and it turned out to be Nicolo. He had passed me while I was having lunch.

I turned the corner and suddenly there it was. I don’t know what I was expecting, but it wasn’t that. It was right next to the road. As we approached, some cyclists came up the road and asked if I would take their picture. I did, and then they asked to return the favor. Then they decided to have a snack and generally be loud and obnoxious when other people were obviously trying to have a moment.

I had let Nicolo get ahead, but after the bikers showed up he went over to a shelter. I don’t know if he was waiting for people to leave, or if he was just getting out of the rain for a bit.

Thankfully the bikers didn’t stay too long, and I was able to have some peaceful moments.

It was very impressive to see, and as I walked up the mound of rocks, I knew I was walking on the efforts of millions of pilgrims over the years. This is where my bad guide book came in handy, because it had the traditional prayer written inside.

“Lord, may this stone, a symbol of my efforts on the pilgrimage that I lay at the foot of the cross of the Savior, one day weigh the balance in favor of my good deeds when the deeds of my life are judge. Let it be so.”

I tossed my little rock that I had carried from Le Puy onto the pile. I know which one mine is in the picture. 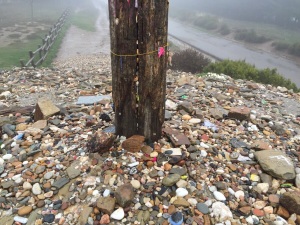 Then I headed off into the rain, fog, and mountain.

I came to Manjarin, but I knew I didn’t want to stop there. They show this stop in “Six Ways to Santiago,” and while I’m sure it would have been an unforgettable experience, it was not one I wanted to have today. I took pictures, but I was unimpressed by the state of his dog. I think people should take care of their dogs.

It was much slower going down the mountain than I had hoped. It was very rocky. The fog covered everything under the peaks, so I came upon the town I was staying in quite suddenly. There had been some advertising signs earlier, so I knew I was close, but the fog kept it quite hidden until you were right there.

At the entrance to the village an advertisement said, “reward your efforts with a nice room.” Don’t mind if I do!

I got a wonderful little room for 25 E, and I can’t imagine having done anything else. There is nothing better on the camino than a nice shower and a comfortable room, and a good meal. I think I will sleep well tonight.

I went down for dinner at 7, and I ran into Dieter! I haven’t seen him in over a month. I realized, as we were eating dinner together, that we had met exactly two months ago today. It was on my second day from Le Puy, September 5th. How fun is that? Dieter is the only one left from the beginning.

I had spaghetti carbonara (close enough, no egg) and rabbit with almond sauce, and I was going to get chocolate cake, but they were out, so I got strawberries and cream instead. Rabbit is very interesting! I was trying to figure out what it tastes like, and it’s very different.