I slept fairly well last night. At least, it was a long time. I got up for breakfast at 7:30, and holy cow this woman likes feeding people! It was the best breakfast I’ve had for 5 E. A banana, a piece of cake, colacao, fresh orange juice, and two huge pieces of toast with butter, jelly, and cream cheese. I felt very well fed.

She is the sweetest thing, and I really wish I’d thought of taking her picture. Apparently I was having trouble with that today. You’d think after 60+ days (counting rest days) that I would think about taking people’s pictures. She didn’t speak English except for a few words, and I don’t speak Spanish, but she told me that if I had any problems I should call her instead of the police. How adorable is she? She said that God would be watching me in heaven and she would be watching me here. That was the basic gist.

I headed off into the rain about 8:20. Leaving town there was another sign showing two options. You could go by the N-120 to Astorga for 15k, or you could go through the countryside to Astorga for 16k. HMMMM. That’s a hard one. The person in front of me chose the N-120. I guess for some people every step matters. Everyone’s camino is different!

When I got into the next town I was joined by George from Canada. He’s from the dry side of BC. He’s an interesting person and we had some interesting conversations, but he also turned me off a bit. Just because you think you know what you’re doing with your life doesn’t mean the answer will be the same for everyone else. What matters to you won’t be the same thing that matters to someone else, and that’s ok. Anyway…

He said there were 4 people in his albergue last night, and the other 3 were ahead of us. I’d almost caught up when I heard someone say, “Bet-te!” (which is how most French people say it.) It was Enrique! I caught up to him fast, but he also wasn’t going far because of his back.

The other two were Melina from Germany, who just started walking in Leon, and today was her 3rd day (she started out very slowly), and Jean-Claude who had been walking from Switzerland, and using one of those cart things. I’d heard about them, but I don’t think I’d seen anyone use one.

It was very muddy and pretty slow going in some parts, but it was also beautiful.

We got to a place where there was a donativo stop with all kinds of drinks and fruit, and even some cake. The woman running it is from Australia. She and her boyfriend bought the place and have been living there for 5 years. They still owed 10k Euros on it until a wealthy pilgrim came along and donated the rest. They also owed the local organic fruit farm 4k Euros, and someone else paid that off. This place they live is definitely not what I would choose for myself, but it’s exactly the kind of thing you imagine as a kid. You put up some boards or hang blankets, and that’s all you need. That’s exactly what they have. No running water. They have to go 1.5k to get clean water. The sleep in one area and cook in another, and they stay there all year round.

That is not what I want to do with my life.

Shortly after that was the descent down into Astorga. I was walking with Melina at this point, and Enrique had gotten a little ahead of us.

There was a steep road going down. Another pilgrim asked Melina if she could take her picture, and while she was doing that, a car came up the hill and stopped right by us. In the car was Jose, and he spoke English fairly well. He asked us where we were from, and then he told me to remember 3 things. 1. When you get to Santiago, give him a big hello from me. 2. Have a good camino. 3. God bless you. I must remember Jose when I get to Santiago.

As we started walking down the hill again, I could see that Enrique had stopped at the bottom and was waiting for us. I told Melina that he was probably waiting to make sure the guy in the car wasn’t trying to abduct us. Sure enough, when we got there he asked if everything was ok. I have found that most people just want to be friendly or helpful, but it definitely is a little unnerving when a man in a car stops next to you. It was very sweet to Enrique to be watching out for us.

I took this opportunity to pose with another pilgrim. 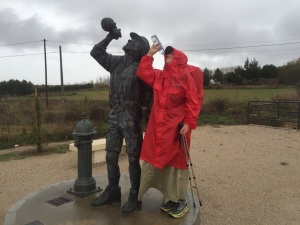 We started walking up the hill into Astorga and there were signs everywhere for nice hotels. Enrique looked at me and shook his finger and said, “No, no Bet-te.” So then I had to laugh and explain to Melina that Enrique had not approved of my two nights of luxury at the Parador as a pilgrim. It was good natured teasing, though.

At the top of the hill we started looking for food. Melina and I wanted to go in one place, but for some reason Enrique didn’t like it, so we wandered around for 20 minutes looking for another place but just ended up back at the first. We found George and invited him to join us. We split 3 little pizzas between us.

Once again, I forgot to take a picture. I thought of it when we were sitting there, before we got our food, but then I thought it would be better with food, so of course I forgot once the food actually got there. All you think about at that point is eating. Plus, I think that once my brain reminds me of something then it thinks I’ve actually done it, so it doesn’t think to remind me again. Oh well.

We finished lunch right before 1:30, and then I realized that the Cathedral was probably closing at 2. I hurried over to the Cathedral, but it wasn’t open. Apparently it’s only open for an hour and a half each morning, plus other times on different days. There was another cool looking church/museum next to it, so I went there, and got there at 1:43, but she said they were closing (at 2) and I would have to come back at 4. She said I didn’t have time.

So then I was debating whether I wanted to stay in Astorga just to see the Cahtedral, or if I should keep going. I decided to keep going. If I stayed, I wouldn’t be able to start walking until the day was half over, and I’d have to make up 9k. Maybe I’ll get to see it another time.

I didn’t get any chocolate when I was at the Parador like I had planned, so I guess this is my Halloween chocolate.

As I walked down the hill out of Astorga, the rain stopped and the sun started to come out.

Then started a slow climb up, up, and the vegetation and everything was suddenly different. I am officially out of the Meseta!

It was a long day because of the rain, mud, and the pavement hurting my feet, but I think I’m still doing well.

I’m staying in Santa Catalina de Somoza, and on my way into town I was stopped by another old man, but this one wasn’t in a car. He was an albergue promoter. He asked where I was going and I pulled out my MMDD and said I was going to El Caminante, and he said that San Blas was much better and that’s where I really wanted to go. I said I wanted a private room and it was 20 at El Caminante, and 30 at San Blas. He tried to tell me that it was 20 there, too, or that the rooms were better, or something. And the food was better. After he valiantly did his duty, I was able to detach myself and continue on. I figured San Blas must have a promoter because it’s further into town than the other one. Sure enough, El Caminante is the first one, right inside town, and San Blas is in the next building across the street. If you need to draw people to your place, better prices would help.

I got my single room for 20 E, and I can’t possibly imagine how the other place could be worth 10 E more. I have sheets, a heater in the room and in the bathroom, towels, and soap and shampoo. Everything I could want!

I went down for dinner and asked Nicolo, first, if he spoke English, and then second, if he would like to eat together. He said, “yes, because eating together is more beautiful.” I kind of met Nicolo earlier. He had been at the albergue with the group I walked with earlier, but he didn’t walk with them.

Nicolo is from Italy and trying to decide what to study in University. I asked if he has seen “An Affair to Remember,” because Cary Grant plays a guy named Nicolo from Italy. I don’t think he had heard of Cary Grant, or the movie.

I got spaghetti and pork and “cheesecake”. Nicolo got flan. He didn’t know what it was ahead of time, and I tried to explain it to him and told him I didn’t like it, but I hoped he did. He said he would like it because he likes all desserts. He thought his flan was very good, and I thought my cheesecake was flan. Yup. It must be Halloween leftovers. My dessert was a flan dressed up as a cheesecake, but it was still flan.

Then I met the ladies at the table next to me. Jill and Steph, mother and daughter from South Africa. They’re 5 days on the camino and have 12 left, and they’re wondering when they get to the point where they’re not miserable anymore. All of their friends at home said how wonderful it was, and they’re wondering why they lied to them. They still have 12 days left. I have hope that something will happen and it will be a good experience for them. We did have a nice talk, though. I think it’s easier to have a good experience when it’s longer, because there’s more time for things to develop. Actually, I don’t know. Everyone’s camino is different, so there’s really no way to say. They’ve been miserable for 5 days, and I was blissful for at least 10 before my feet started hurting. It doesn’t help that it’s been raining so much. I really hope their camino isn’t meant to just be awful lol.