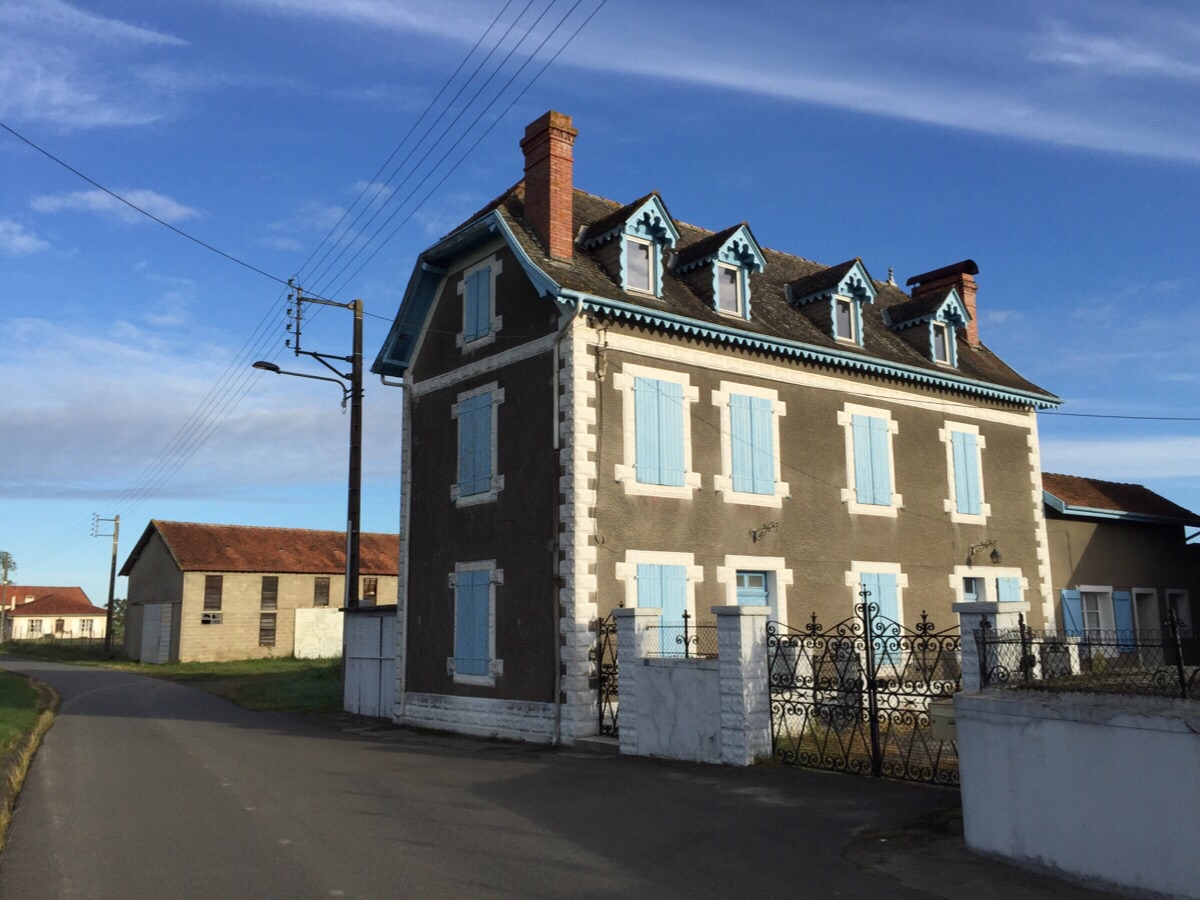 Claude had to leave early to get started on his restaurant stuff, so we had breakfast at 7:30. He said we could stay as long as we needed, though, and since today was a very short day, I didn’t leave until 9. I think I would have felt bad staying longer. Today was one of those days where the option was either 18k or 32k. I chose the 18k. Unfortunately, it’s another one of those days where no one knows what they’re talking about, and it was actually less than 15k. A very short day. Luckily, because I’ve been taking it slower, I dragged it out to 5 hours. 3k an hour! I am happy to report, though, that these smaller days have been helpful. Today my feet and legs felt pretty good. Not great, but pretty good. I had a couple of long downhills and they did very well. I am more optimistic about the Pyrenees. Tomorrow and the next day are 28k ish, so we’ll see how that goes. I think I’m ready. I will have to walk faster than 3k an hour, though.

I had nutella for breakfast again. When nutella is an option, and you’re in France, and you’re walking a million miles every day, how can you say no?? I can’t. Nutella and hot chocolate.

It was a beautiful day. Cool, cloudy, and no rain. Very cloudy, though. I didn’t get to see the Pyrenees at all.

I love French houses. I’m into more modern housing, but I don’t know how old these styles are. I absolutely love them, though. The shutters are so cute. I totally want a French style house. Apparently they’re all concrete.

People I’ve run into who have walked through Spain keep telling me that I’ll like it more. “It’s more fun.” “It’s better.” I’m sure it’s different, but who’s to say it’s better? I will miss France. I’ve loved everything about it. I’ve loved the people, the landscape, the walk, and I’ve loved the quiet times, too. The Le Puy Route is perfect for introverts. I love walking by myself and listening to the day around me. The wind in the leaves, or through the corn, the dozens of birds singing that I don’t recognize. The rustle of leaves as you pass and you know it’s a lizard darting away. And the little villages you pass through are so quiet. There’s hardly any traffic or people.

I think I will like Spain. I don’t know how many of the large communal albergues (the Spanish gîte) I’ll be able to stay in. I’m sure I will become accustomed to the larger amounts of pilgrims. But I don’t see how it could be better. Maybe I will be surprised.

And I have to say, before I forget, and I don’t think I’ve said this before, but as I’ve been here, I’ve realized there are some English sayings that are bastardized French sayings. The only one I can think of right now is “Toodaloo!” (however you spell that) It really came from the French saying, “à tout à l’heure,” which roughly means, “see you soon.” Totally blew my mind when I made the connection.

Today was a combination of flat cornfields and hills and cows. It was also a little busier with traffic. I crossed over a bridge that was having some construction done, and I crossed over a real freeway! I don’t think I’ve mentioned French bridges, but they absolutely terrify me. People ask if I’m afraid walking alone, and I’m not at all, unless I have to cross a bridge. The big bridges over rivers, canals, or freeways, have “sidewalks” for pedestrians that appear to be made of small concrete slabs. When I walk on them with my poles, they sound very hollow and some of them shift or wobble underfoot. It’s easy to imagine that there’s nothing underneath them and it would be easy to break through and fall to whatever death happens to be below, because I’m sure there’s nothing supporting them properly underneath. I walk on the actual bridge if possible, and if there’s too much traffic, I don’t use my poles so I can’t hear the hollowness.

I also had something funny happen. I was walking through a small group of houses and I saw a well dressed couple peeking around, so the impression I got was they were looking at properties. The woman said something to me, and I said the usual, “I speak a little bit of French,” and she whipped out a folder and pulled out a pamphlet and they were totally Jehovah’s Witnesses. She said a lot of stuff in French I couldn’t follow, but I smiled and nodded and took her pamphlet. I was amused.

I found a picnic table to eat my lunch, and I have finally found a canned paté that I can stomach mentally. Mousse de canard is smooth and uniform and much more of what I’m used to. I was very happy with it. Regular canned paté looks and smells like cat food, and I have problems stomaching it. What I was not happy with were the huge red mites that started crawling all over me. I don’t know where they came from. I had one on my eyebrow and one in my hair, and this one, on my yogurt. I found another one crawling on me about 30 minutes later.

As I said before, today was terribly short. Only 9 miles! I got into Sauvelade before 2. The Abbey church is under some kind of renovation, but the door was unblocked. I hope it was ok to go inside, because I did. The living quarters part of the abbey looks like it has problems. I don’t know if anyone is actually living there. I found a window crawling with huge hornets. Some of them were dead, but some were very alive. There were also tons of flies.

I found my gîte, but there was a sign saying it didn’t open until 3. This is the problem with shorter days. I had an hour to kill. There was a sign across the road saying there was a roman bridge down this path, so I went to check it out. It was covered in vines, so impossible to see from the side, but obviously a super old bridge.

I’m in a dorm gîte with 4 other people, so I hope it goes ok. Tomorrow and the next day I have my own room again.

Dinner started at 7. Kind of. It was time for the imperatif (imperativ?), which this time meant alcohol plus some thin slices of various things. Pancetta, chorizo, and something that kind of tasted like pastrami, but I’m sure wasn’t. I got to have a glass of blackberry puree/juice that he probably uses for mixing cocktails. Jeff and Lili are an interesting couple. Jeff has a huge music collection and plays something all the time from his macintosh computer and sound system. Lili cooks and talks. The imperatif consisted of her talking for an hour. I should have realized it was a sign when Patricia called to make the reservation and they talked for 10 minutes. Thankfully, I can understand Lili very well. She speaks slowly enough and her accent is such that I could follow a lot of what she said. Kind of. I get the general words, but I’m not sure the meaning is always right because I miss a lot of the smaller things that are important for context. But, I am picking up a lot more than I was a month ago! Now I’m about to go into Spain where I know next to nothing. Jeff speaks English, and he said I speak very good English. Everyone else laughed, but he says that it is much easier for him to understand Americans than British, and forget the Australians.