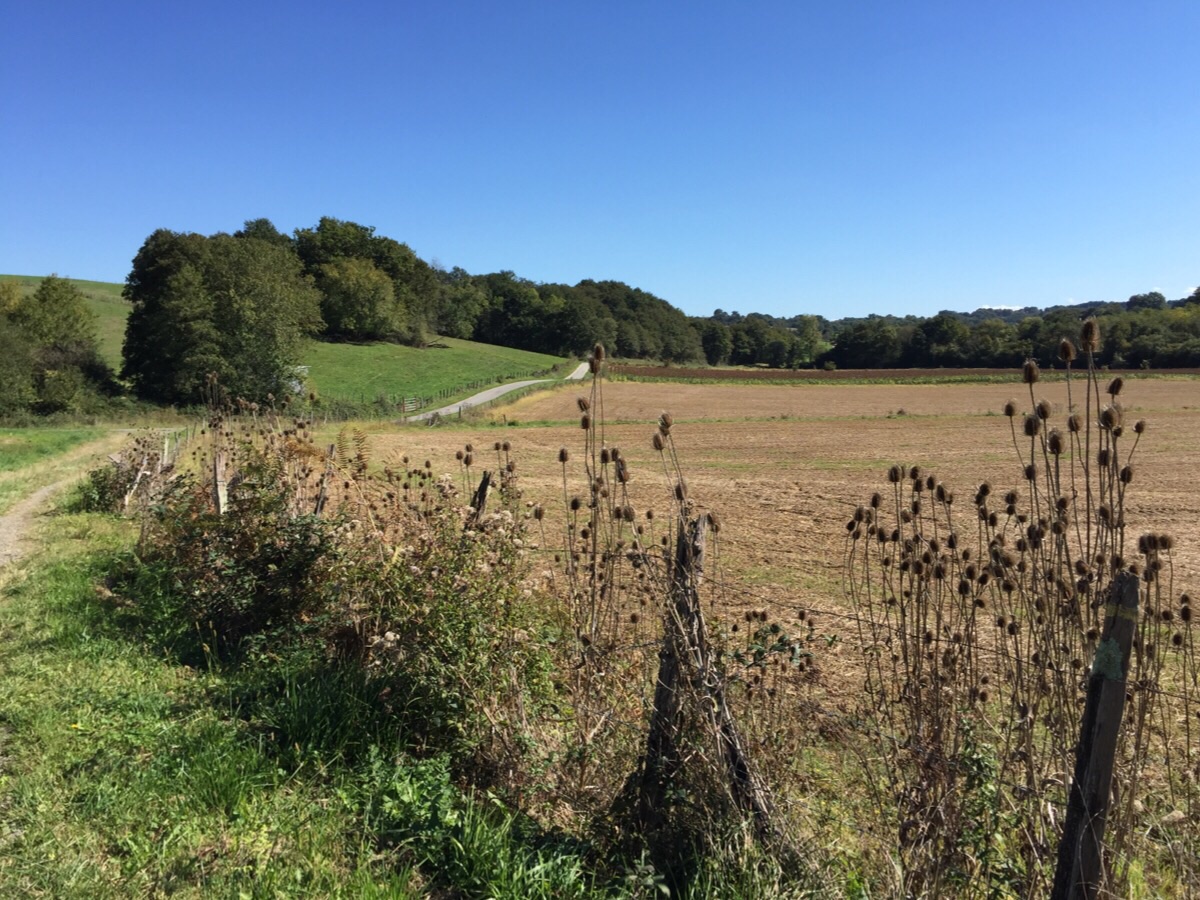 The camino is such a crap shoot. You never know when you’re going to roll craps. For the most part, I’ve had very good luck. However, after last night, I need to do some research on Spain, because I will not be able to sleep in those big dormitories. Yes, there won’t be as many people as in the summer, but there will be more people than in France, and with the percentage of snorers out there, I will not be able to sleep.

Because dinner ran later last night, and I wanted to book a place in St. Jean, I was up later than I should have been, so by the time I tried to sleep, I was too wired to settle down right away. I took a melatonin and put my buff over my eyes, and I was the first one in bed. The problem is that I did not fall asleep, and the snorer fell asleep quickly. My ear plugs were not even close to stopping the noise. Even pressing them into my ears with my fingers didn’t help. Even now, 17 hours later, I can still hear the noise in my head. It was absolutely awful, and I have no idea how in the world the other 3 people slept. By 11 pm I was crying. I wanted to yell at them. Instead, I got up, took my pillow and sleeping bag, and went and slept on the floor in the kitchen. The tile floor was freezing cold, so I had to get up again and go get some blankets to lie on. The blankets helped with warmth, but I was still trying to sleep on a tile floor. Not exactly comfortable, but much, much quieter.

I think I slept for a 3 hour block of time, but not much after that. Breakfast was supposed to be at 7, so about 10 minutes after 6 I got up and went back into the bunk room. I got to lie in bed for about 30 minutes. Compared to the floor, it was extremely comfortable. Everyone started waking up at 6:30, and as far as I know, no one knew what had happened.

All things considered, I actually slept pretty well. It’s making me dread Spain. I hope these people have wifi, because I need to do some research. I will probably be spending more money than I thought, but I have to sleep.

Things I am looking forward to when I get home: Sleep, conditioner, seeing my dog, sleep.

Breakfast was at 7 and the hosts ate with us, which meant breakfast lasted much too long. I was ready to leave and said goodbye, but apparently everyone had agreed to taking a picture before heading out, so I had to wait around till people were ready. There was a large (10+ group of pilgrims leaving from town. It was the largest I’ve seen in a while.

It was also cold. After last night and this morning, I’ve decided not to send my second long sleeve shirt home.

It was a nice morning. Definitely more hilly than it has been lately. I assume it will be like that until I cross the Pyrenees and then for a bit after.

Today was my first long day in a while, and it actually went really well. My feet did much better, but it’s pushing on my upper limits. 27k. It would be nice if I could do 25k a day comfortably, but I know that won’t always be an option, and the comfortable part is questionable.

I passed through Navarrenx shortly before noon.  Apparently it’s famous for being some kind of fortress.  I saw a group of school kids on a field trip.

I have started seeing palm trees.  I don’t know if they’re at all natural in this part of France, or if they just transplant well.  It’s very odd to see palm trees and aspen together.  I’m having a hard time wrapping my brain around that one.

I took two breaks. I sat on a log in a forrest for a while and listened to the birds. Apparently it’s some kind of hunting forest? There were signs that said, SILENCE palombiere, and then there were these huge tall hunting blinds in trees? That’s what they looked like, I’m not completely sure. It was a little freaky. If you’re not silent, will someone shoot you?

I also stopped at a picnic bench about 2.5k away from my stopping point. It really does help to get off of my feet for a while, but only if it’s something I can sit on, like a bench. Sitting on the ground might help my feet some, but it doesn’t help my legs.

I laugh a bit, thinking back before my trip, when I was trying to plan and had no idea how long it would take, I was thinking if I had 2 weeks or more at the end then I could walk another camino! I really don’t know why I thought after walking 1000 miles I would want to do anything that involved anything but not walking.

Starting from the beginning of my walk, something everyone wants to know is where did you start from and where are you going? When I would say I was going to Compostelle, a common reaction was wide eyes and a sincere “whew, bon courage!” And I just thought it was no big deal. Now that I have been walking for a month and 500 miles, I realize what a big deal it really is, and every time someone says, “bon courage,” it really means a lot. Today I was passed by two cyclists and one of them yelled to me, “courage, courage!” And I’m sure he didn’t hear my thank you in reply, but it really did mean a lot. That is another thing I will miss about France and I realized it almost too late. When I get into Spain, almost everyone will be going to Santiago, and most of them will be 500 miles fresher than I am. At the beginning, at least, for them it will also be “no big deal.”

At this point in the walk, people are either stopping in St. Jean, Ronceveaux, or Compostelle. The closer I get to Spain the more people I meet going all the way.

Today I’m staying in Lichos in a chambre. I’m in Basque country, but I don’t know if I’ve experienced anything really Basque yet. Tomorrow, apparently, there will be boisterous singing at dinner.

This place I’m in is different. You never know what you’re going to get. I’m the only pilgrim here. I was starting to write up my day, but at 4:30 the lack of sleep just overwhelmed me and I curled up in the bed. I dozed off and on for 2.5 hours until there was a knock at the door asking if I wanted dinner. Yes! I jumped up and got dressed and rushed downstairs to find that it was just me eating alone.

The first course was some more cold cut type stuff, so maybe that’s a Basque thing, and a tomato salad. Then some kind of poultry leg with a mushroom sauce and french fries. I think the mushrooms were canned. Then there was a cheese course which consisted of wrapped cheese, and dessert which was ice cream and canned peaches with canned whipped cream. It was a very prepared meal. The hostess is very nice, but it’s just a little odd. I don’t know if they think they’re doing me a service by having me eat alone, or if they just don’t want to socialize. I’m ok either way, it’s just not what I’m used to. It seems like it’s more of a side business than hosting pilgrims because you really like hosting pilgrims. The family started eating shortly after I did, in the other room, and I could hear them eating in front of the TV. I don’t know what they were watching, but I did hear someone say, “Miley Cyrus.”  When I said I didn’t drink alcohol, she asked if I wanted some peach juice, so, surprised, I said yes.  It’s totally not peach juice.  It’s this syrup stuff that the French enjoy putting in water to make flavored drinks.  I didn’t drink any.

Another day, perhaps, I might have been disappointed by a lesser pilgrim experience, but today it’s exactly what I needed. Sleep, and peace. I’m looking at 10 hours of sleep ahead of me and I really hope I can actually sleep for most of that. I think I have a slightly longer day tomorrow.