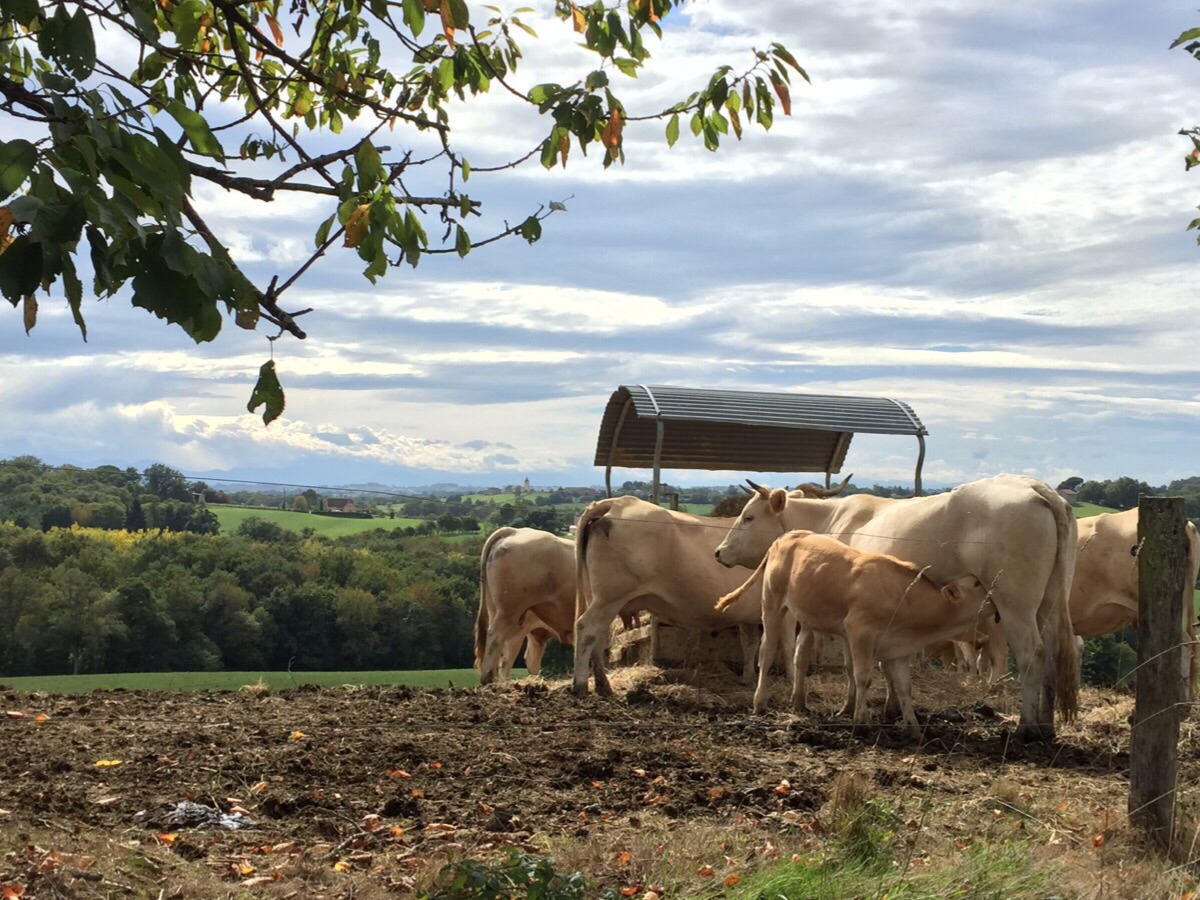 I slept very well! Except someone started vacuuming at 6 am, and housekeeping opened my door at 8 am. I think they don’t communicate very well in this hotel.

I got up about 8:15 and checked my weather app. It said it wasn’t raining, and wasn’t supposed to rain! Yay! Then I opened my curtains and patio door, and it was raining. Stupid weather app.

I decided I should get my stuff all packed before breakfast, because I didn’t want them to “clean” while I was at breakfast and have to do it again after I left. I went down at 9 and tried to eat slowly. When I was out the door just before 9:30, it wasn’t raining anymore! It seemed like it would be a good start to the day.

I tried to go back to that boulangerie to get more bread, but they were closed. That was sad, but it wasn’t the end of the world. I had bought one of those canned tuna salads, so I was covered.

For the first time in a while, it was a long, steep climb out of the city. It started raining a little bit. I tried to stop to see a church, but it was closed. There was a sign on the door about keeping the door closed to keep the pigeons out, but I think it was also closed closed.

The climb out of the city must have put me much higher than I’ve been the last few days, because suddenly, I saw the Pyrenees! They were there, and they were huge! It almost made me tear up a bit. I have seriously walked across half of France, and I can see the Pyrenees. How cool is that? It made me think about the Pioneers and how they felt crossing the plains and seeing the Rocky Mountains for the first time. They probably cried for other reasons.

I walked slower today for two reasons. 1. The lady said she wouldn’t be there until 5, and 2. I have to walk slower because of my back/hip. It really is starting to bother me. I’ve only been walking for just over a third of my time. I still have a long way to go and a lot of days left, but if I’m going to make it at all, I think I need to slow it down a bit.

I had talked about this with Megan, and Tanya and Peter, but I do not think the prolonged walking is getting easier. It’s definitely getting harder on my body. I can imagine that by the time I go home, I will not want to move for a very long time. I will go to the Chiropractor, but that’s it. I’m so glad, though, that I’m well enough to do this and it’s going as well as it is.

My feet started hurting after only 6 miles. My legs and knees and back/hip didn’t want to be left out. All of this pain while walking made me spend most of the day thinking about what I can mail home. My pack is also not sitting so well anymore. I don’t know if it’s because I’ve lost a lot of weight around my middle and I’m having a hard time getting the belt tight enough. But cutting some weight should help. I’m going to send back my pants, and I’m going to change my raincoat/pack cover for one large poncho. When it rains really hard, the pack cover collects water in the bottom and it gets my pack wet. Kind of defeats the purpose. I think the rain in Spain will be heavier. I’m sure I’ll be able to buy a poncho in St. Jean. The great debate is my second long sleeve shirt. I’ve only worn it a few times, but I haven’t ever needed it. Will I need it in November? I don’t know, and it weighs a pound! It’s also so thick it doesn’t dry overnight. I also think I will mail home my nice shirt, which will leave me with just my two skirts and 2 short sleeve and one long sleeve shirt. I think I can make do with that. If it gets super cold, I can buy another long sleeve, but I don’t want to carry an extra pound for 7 weeks if I don’t need it. I really do tend to get too hot. I’m afraid it will be like my raincoat, and as soon as I send it back I will need it.

Anyway, circumstances are different than they were when I started. I need to cut as much of the extra as I can. I will wait till St. Jean, though, because I want to mail my Miam Miam Dodo home for sentimental reasons, and I don’t want to mail my rain gear until I buy new stuff. I just don’t know if I’ll regret mailing that heavy shirt home.

Today was all new people. That’s what happens when you take a day off.

It was a lot more cornfields and some more glimpses of the Pyrenees. I’m going to get closer to them every day until I’m there!

I had lunch in Miramont-Sensacq, near the church.

I haven’t said anything about the lizards yet, I don’t think. There are tons of lizards in France, everywhere. But they are so fast! I’ve never been able to get a picture of them, until today. Apparently cemetary lizards are more chill. Not very good pictures, but at least there is now photographic evidence that they exist.

Once again I’m not thrilled by the signage in France. This picture saying Santiago is 911 km away was right next to another sign that said it was 950km. It also said Pimbo was 3k away, and it took me an hour to get there.

I got a message from Claire saying she’s in the city I’m going to be in on Wednesday. She’s already two days ahead of me! This makes me sad. It would have been fun to spend more time with her, but I really think I need to listen to my body. Maybe I’ll start feeling better.

Dinner was a bit odd. I’m the only one here, and I was the only one eating at the table. There was so much, though!

The starter was soup, and they brought out this huge pot. I wasn’t sure how much of it I was supposed to eat, but I think I ate at least 3 bowls. Then she brought out a carrot and tomato salad, so this time I asked if I was supposed to eat it all, and she said yes, it’s for eating! Then the main course was a pork chop and some kind of casserole. It had cauliflower and another vegetable that I have no idea what it was but it was delicious. Then dessert was ice cream and pears.

The best part is it only took 45 minutes!

I’ve been spending the time after dinner trying to figure out the rest of my days in France. It looks like I’ll get into St. Jean next Sunday. I could go faster, but I don’t think I should. I’ll take it easy for a few days and see how I do. Hopefully I can make my remaining reservations ok. Claire helped me with one today! In Spain I won’t need to make any.