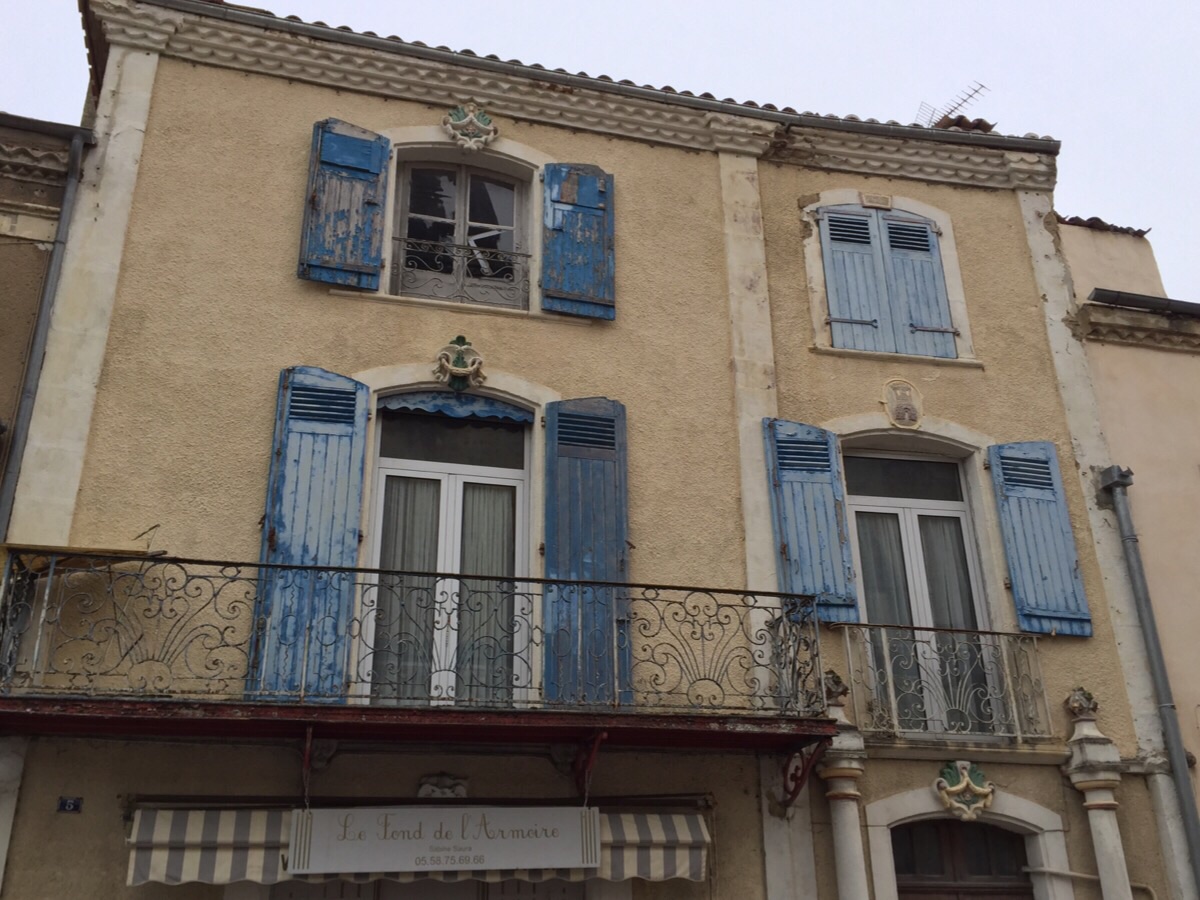 Yesterday I said the bed looked glorious. Today I can say that the bed is glorious! Like every building in France, the walls are paper thin, but I didn’t put ear plugs in and it was still the best sleep I have had in weeks. It’s ridiculously expensive (not really), almost 60 Euros for demi-pension! But as my dad says, “it’s only money,” and I’m in France! Sometimes it’s worth it to pay a little extra to get some extra rest. I wish the hotel I’d stayed in Figeac for 3 days had been this nice. Oh, I will miss this glorious bed, and the fluffy softness of the comforter.

I still had my alarm set for 7:15, so that woke me up, but I stayed in bed until I decided I should get up and go to breakfast, which I did around 8. Then I came back to the room and snuggled up in bed and watched some conference until I realized that if I wanted to go to the grocery store, they were probably only open before noon.

So I ventured out into the cold, gray day to stretch my legs and walk around a bit. My legs actually hurt some. They started hurting a few days ago. All things considered, I have done very well. At home when I do a lot of hiking, I find myself having to go to the Chiropractor a lot. The idea of spending 12 weeks walking the camino with 20+ lbs on my back and without access to my Chiropractor was kind of terrifying. I have done very well, until a few days ago, when I realized that my hip is a little bit off. Hopefully it won’t get too much worse or slow me down much, or cause any major problems. I would really like to finish this thing on my feet. I have noticed, though, that sometimes if I try to lengthen my stride, I get some shooting pains. I have a Chiropractor appointment scheduled for the day after I get home, but that doesn’t really do me any good now. Thankfully it’s not bad, and I hope it doesn’t get bad, but it is noticeable. This is another reason why I am going to try not to do any more days over 30 unless I have to.

I looked at the weather app and today would have been a perfect day for walking. It wasn’t supposed to start raining until 4 pm. I hope the rain tomorrow won’t be all day, because it does look like it will be raining in the morning, and I have 28k to go, and the lady has a dr. appt, so the place doesn’t open until 5 pm. I hope it works out all right.

I walked around the city a little bit, but not very much. Today was a day I planned to spend mostly in a glorious bed! I walked to the Cathedral and poked my head inside, but they were in the middle of a mass. I thought about staying, but I did have a lot of Conference to watch today, and that at least is in English.

I went to the grocery store to get some food for tomorrow, but then decided to get some food for today, instead of going out for lunch. I had stopped at a boulangerie and got a baguette, so at the grocery I bought some paté and some comté (I think that’s how you spell it) cheese, and some bananas, and some new water bottles. I was going to get some cookies, because I wanted something sweet, but then I saw the jars of nutella. I debated for a while, but then I decided that I could get my baguette with nutella and buy a new baguette tomorrow morning on my way out of town. Best. Decision. Ever. Ok, so I know nutella is bad for you, but it’s so good!! And I’m in France! And I’m spending all day in a glorious bed! But I was smart and got the smallest jar I could, which was still a ridiculous amount of calories, but yes, I ate the whole thing. Probably not the smartest thing, but it was delicious! And holy cow that baguette was the best I’ve had in France I think. I’m definitely going back to that bakery tomorrow. The crust was thin and crispy and it was just ridiculously good by itself, so you can only imagine what it was like smothered in nutella! I don’t have to imagine it. I ate it.

Then I spent the next 5 hours curled up in bed watching Conference. It was just what I needed. It’s so wonderful that we can watch it with the internet anywhere in the world. After the week I had, it was just nice to re-focus a bit.

I went down for dinner at 7:30 and they had me at a different table. It was right next to another table for 1 with a pilgrim I had met in Saint Antoine! His name is Gerrard, and he’s French Canadian. The girl moved my chair to the other side of the table so we could face each other and talk during dinner. The restaurant was also almost completely empty tonight. Yesterday it had been full and bustling. It was quite a different feel tonight. At the end of the meal, Gerrard came and sat at my table to look at my miam miam dodo, and I thought it was a perfect opportunity to see if he would help me book a couple of nights! But right then, a man from England came over, wearing a camino de santiago shirt, who just wanted to talk to us because he heard us talking about the Camino. Unfortunately, Gerrard left shortly after that. Hopefully I will be able to get Tuesday booked. None of the places in the town I want to stay in speak English, so I have to find someone to book for me. If I remember, I can stop at the office of tourisme in the next big town.

I shouldn’t have worried about dinner. There were different options tonight, which I suppose makes sense, because this is a fancier restaurant. I choose an omelette for my starter, and it would have been very good except that it was way too salty. The main course was fish, and it had a crispy skin and was very good. I had the mousse for dessert again, of course.

It was very nice that Gerrard was there, though, because I’d had such a hard time communicating with the lady the night before. I wanted to leave the hotel a bit later tomorrow morning because I don’t have to be at my next place until 5 pm. If I leave at 7, that would be a ridiculously long day. So with Gerrard’s help, she said it was ok if I had breakfast at 9. That will help some.

We also looked at the weather app again, and it said it’s supposed to stop raining by 10 am! That would be awesome! But then, the weather can always change. It would just be nice if it didn’t rain all day, especially because I won’t be able to get clothes washed until 6 and since it will be so late, maybe I shouldn’t wash them at all! We’ll see.

Anyway, it has been a wonderful rest day. I hope it carries me through and helps keep the bad thoughts at bay.