I slept surprisingly well. I didn’t cough at all during the night, which I hoped was a good sign. I started coughing when I woke up, though, and I do feel burning sometimes when I breathe, so I thought I should just go to the doctor.

I didn’t get up until after 9. I ate breakfast, and Cyrille called their family doctor, but she didn’t have any openings for me. He called another place that was an office with 3 doctors, and they took walk ins, so he said that was my best bet.

Today is a market day in the city, so I got to see that on my way to the doctor. I bought some fruit, and it was so strange to be charged real prices for it. I got a bunch a grapes and two peaches for 1.5E, and two more bunches of grapes and 3 nectarines for 1.9E. I also bought 4 croissants for 1.2E. Yum.

The doctor’s office was a little strange. I walked in, and there was a waiting room, but no reception. I wasn’t sure what I was supposed to do. I just waited, and a doctor eventually came and got me. He spoke enough english, which was good. He listened to my lungs and said something that sounded very much like “pneumonia” but then he said in English, “an infection.” Are all lung infections pneumonia? I don’t know! He charged me 23E and gave me a prescription for amoxicillin, paracetamol (tylenol) and a cough syrup, oxomemazine. He said it would be ok for me to keep walking, but to take it easy for a few days, and try not to walk in the rain.

I already have tylenol, but I figured it would be too hard to separate the prescriptions, so I let them fill everything. They also cost 23E. Less than 47E for a doctor visit and drugs. Not too bad. He also gave me a paper for the insurance when I get back, but I don’t know if I will even bother, not for 47E.

I’m going to try to book private rooms for a few days until I get better.

I was feeling some fatigue and some pain in my legs from just walking through the city. I really hope these antibiotics work quick and I will be fine.

My sweet mother contacted someone last night who was able to find someone in the area who could come and give me a blessing. I got an email from Patrick from Montaubon, which is another city south of Cahors, and he said he would be able to come around 2 pm today. I am so grateful for the priesthood, and grateful that someone was able to come and give me a blessing. In the blessing he said I would have the strength I needed to finish my journey, so I am very grateful for that.

After he left I went to the office of tourisme to get a stamp. The people I’m staying with don’t have their own stamp. I also got a stamp from the doctor’s office. It will definitely be a memorable one.

I spent the afternoon resting and watching netflix. At 7 I headed out to find dinner. I have no idea why, but it seemed like almost all of the restaurants were closed, except for the “fast food” places. I walked around for 30 minutes looking, but ended up about 15 seconds away from my door at a turkish and greek place. I got a mix plate, which was pretty much a little of every kind of meat. It was actually really, really good, but not what I had pictured for my second night in Cahors. 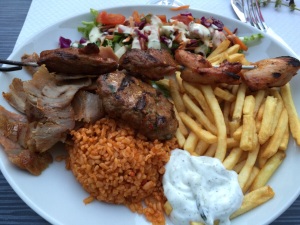 When I got back, Cyrille helped me make some reservations. Unfortunately things aren’t going quite as I’d hoped. I was not able to get a single room for tomorrow, and I have to walk 27k. It’s a good thing I’m going to wake up tomorrow and feel so much better! I’m taking 3 days to get to Moissac, and then I’m going to spend another rest day there, I hope. He wasn’t able to get through to the place I want to stay, so he left a message.

Here’s the family I’m staying with. Emma, Natan, and Cyrille. I finally realized that Cyrille reminds me of Hugh Laurie.  And here is also a picture of the big scary door.