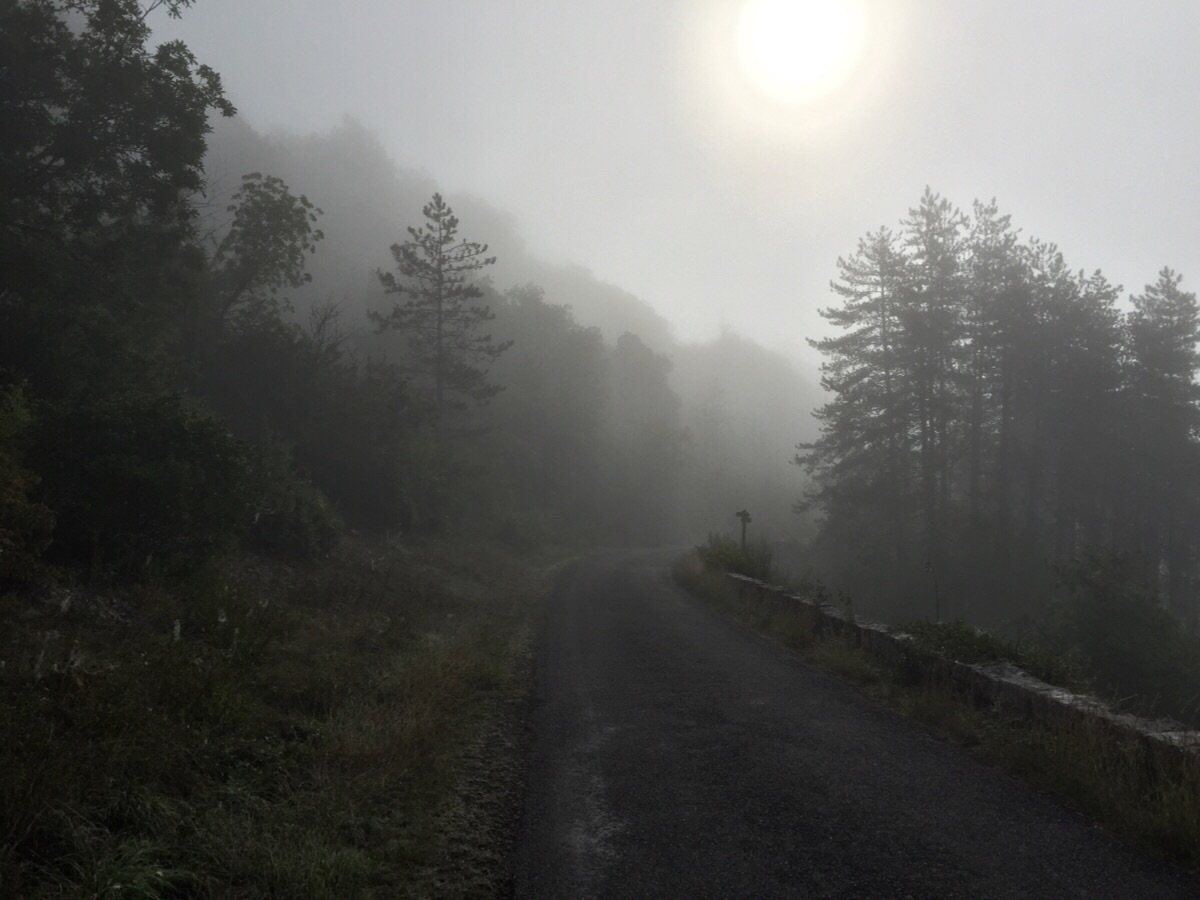 Kushka asked if I wanted breakfast at 8, and I asked for 7:30. I really should have asked for 7. Breakfast was the usual, but I tried to eat a little bit more since I knew I wouldn’t have much food today.

Kushka said on the radio they were talking about the wolf reintroduction and that it’s costing a lot of money and the farmers aren’t too happy about it. I asked if there was any natural prey for the wolves, like deer, but she didn’t really understand. Then later she mentioned that there was a pig hunt yesterday in France for the wild boar, and that they’ve killed 5000 pigs so far. Apparently the wolves eat pigs, but not enough of them.

Kushka said she would show me the way out, and walked me the long way around town. There was a thick fog over everything, and she said that the fog meant it would be sunny and hot later.

I was finally on the trail at about 8:30. Much, much later than I should have gotten out. I had 30k to go today.

The fog lasted for a long time. The trail took me on top of the cliffs. The Célé Valley might be really pretty, but the highlands aren’t much to write home about. The fog was very pretty, though, and there was even a fogbow! It was kind of awesome. I could see it better through my sunglasses, so I tried to take a picture through the lense.

The path brought me to the front of the cliff, and to the town of Saint-Sulpice. I’m sure it was gorgeous, but it was hard to tell. There was a view point over the valley leading into the town, but the fog was so thick you couldn’t see anything. The fog does make some pretty pictures, but it would be to know what it really looks like.

Then it was back up on top of the cliffs and over.

The Célé Valley itself is beautiful, but the trail doesn’t spend very long in the beautiful parts. Most of the day was spent in the scrub on a very stony path with no view of anything. It seems odd to me. And then after 10k of walking through that, you come out and get to see this for a short time.

Marcilhac sur-Célé. I’d heard there was a pretty church here, so I went into town to look for it. Turns out it’s half in ruins, or it’s been half restored. I’m not sure which, but it was very striking.

When I got back up to the top of the cliff it was noon, and there was a sign saying “Cabarets 18.9k” Ugh. Still 19k to go, and I’d only gone 11k in 3.5 hours. I decided to pick up the pace as best I could, especially since most of what I’d be going through was scrub and rocks.

I stopped at about 1 to pull out my fruit and my last lara bar, but I ate on the go.

Sauliac was gorgeous, and I had a nice little stroll along the cliff. As I passed the town, I noted with great relief that the path was not making me go into town. Sometimes it’s nice, but towns usually mean down then back up. The ups aren’t too bad, even though they’re fairly slow, but the downs are awful for the feet and knees.

I headed back into the scrub and the hot sun. Then I heard a gunshot. It didn’t quite sound like a rifle. It was lower, so maybe a shotgun? But I don’t really know much about guns. It sounded like a big gun. Then I heard another shot, and about 4-5 in quick succession. I wondered what I was getting myself into. Open season on pilgrims?

As I made my way up higher into the scrub, I started to hear dogs. Lots of dogs. And as I got closer to the braying, I suddenly realized that the braying was getting closer to me. I stopped still, terrified of getting run over by a hunt. About 30 meters in front of my a pack of hunting dogs ran across the trail. Across, thankfully, and not toward me. They had bells on their collars and they sure made a lot of noise. I got some video of a slower dog who was following. The next 6k or so was a little frightening. I didn’t want to get shot. The path I was walking on was also an access road for hunters. I’d thought I was getting away from the hunt, but soon I heard dogs in front of me again. About 20 meters in front of me, a pig, with the side of his snout ripped open ran out of the scrub and toward me, until he noticed me, then he took off back into the scrub. He was a little guy, and looked just like a peccary. About 10 seconds later the dogs followed, braying. I hope they got him soon, I can’t imagine what it would feel like to have half my face ripped off. Poor guy. Being a wildlife major in college, I’m pro hunting, but I’m also pro not suffering.

I managed to escape the hunt without being shot. Yay!

My feet were hurting pretty badly, but wanting to get to my gîte at a decent time was fueling my pace. I really don’t know how I did it, but I covered the last 19k in 4 hours. The church was chiming as I was walking through town.

One of the people who showed up at the gîte was a girl I had passed on the trail.  I remembered wondering if I would run into her again later.  Her name is Estell, and she invited me to eat dinner with her.  Her English is good enough that we could talk resonably well.  I didn’t get a picture of her before it got too dark, but I’m sure we’ll have other opportunities.

She is in between jobs and hoping to go to Santiago.  She had walked from Le Puy to Figeac before, so this time she started from Figeac.  She just finished 3 years working in some small islands near Madagascar, working in medical biology, teaching, and pharmacy.

Dinner was incredible.  Seriously the most amazing dinner I’ve had here so far.  The restaurant is connected to the gîte, so it was included in the price.  Whatever we wanted, and everything looked good.  It goes to show you can’t tell by looking at a place what the food will be like.

They brought us some little toasts with a ham spread.  I started with a tomato and anchovie tart with pesto, and a salad with ham.  Then the main course was crispy lamb with hazlenut sauce and vegetables with sesame and a baked potato.  Everything was stinking delicious.  My dessert was some kind of chocolate thing.  Richer than mousse.

Peche Merle doesn’t open till 9 or 9:30 tomorrow, so I get to take it easy in the morning.