I did not sleep very well last night. I think I was nervous about having to walk so far after not having walked for two days. I dreamed that it was some kind of race, and I had my pack and my poles, but I couldn’t find my socks, and that was going to put me back several hours, but it was ok because I would be able to make it up.

The camino isn’t a race, but today is the day of the Airforce Marathon, and I was signed up to participate, until I decided to come to France! I guess my dream was a combination of things.  Thankfully I did not have to walk 26.2 miles today, but sometimes it feels like it.

I actually managed to get out at a decent time and stopped by the boulangerie and bought my two croissants and another bottle of water.

As I walked along the river, I looked over and saw Megan coming out of her hotel! What a fun surprise. She and Jerry were hoping to rent a car today to go up to Rocamadour and some caves up there.

It was cloudly, but not raining, and the weather report said it wasn’t supposed to rain until 1 pm. There was a thick fog over everything, so I wasn’t able to get any shots of the city. I don’t know if I would have been able to see it anyway.

There was a fairly steep climb out of the valley and up the mountain, but for the most part, it was a fairly flat day. Compared to others. I think.

It did, however, rain before 1 pm. Except I’m not really sure if you can call it rain. It was more like a heavy spitting. It was light enough that I had my pack cover on, but not my rain coat. I only like wearing the rain coat if it’s really raining, because once you put it on it doesn’t breathe at all, and then you start sweating, especially on the uphills, so you get wet anyway.

For several K I followed a yellow poncho. Turns out it belonged to a nice woman named Annie! Her English was good enough that we could have a nice conversation. Her son lives in Australia, and after she walks for 3 weeks, they will go visit him in Sydney for 5 weeks. She is a retired school teacher and taught kids ages 3-10. She started from Le Puy 5 days after me! She says she walks too fast. Her husband doesn’t like walking with her, because apparently it’s not good enough for him. He likes to climb 7000 meter mountains. I told her the highest mountain I’d climbed was just over 4000 meters. She said I could climb Mount Blanc. Maybe someday. 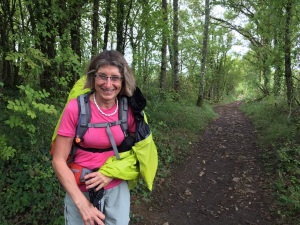 It was actually quite a blessing to run into Annie. We had a very similar, fast pace, so we walked together for several hours. It really helped the time fly and take my mind off my feet. My feet were doing well, but I still had very far to go. She is also doing the Célé Valley route, and she made sure I went the right way at the intersection. I wouldn’t have been paying attention and gone on the regular way, and that would have been very, very bad. I am thankful for Annie! 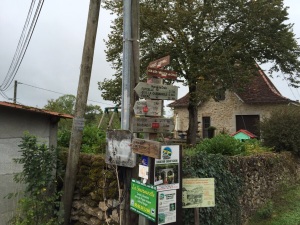 I also ran into Tanya and Peter again at the church in Faycelles. They were so cute, they always are. They said, “Hey, we went to Krakatoa yesterday, the place you recommended.” So I was like, “Rocamadour?” “Yes, that one!” They thought it was very touristy, but still enjoyed it. They are going the regular GR 65 route (the célé Valley is the GR 651), but chances are I will still run into them again. They’re planning on going to St. Jean Pied de Port, but they might not have time to walk the whole way.

I caught back up with Annie and walked with her until Corn. Yes, Corn. She stopped to eat lunch, but I wanted to keep going because I had 4k farther to go than she did. It was surprisingly flat so far, but I knew it would go up, I just didn’t know when.

It went up just after Espagnac and I finally got to see some of the views that I had been expecting. Up until then, I had been following the river, and the trees were so dense you couldn’t really see anything.

I went up, up, up, then behind the cliff, and went through this odd village full of rocks, and then came out on the cliff face. It was quite beautiful! I made my way along the base of the cliff until I came to a sign that said, “Chateau d’Anglais” with an arrow pointing straight up. So I thought there must have been something on top of the cliff, but no, it’s built into the cliff, just like an Indian cliff dwelling! There did not appear to be a way up there, and it did not look very hospitable. It makes you wonder why people did the things they did.

I came out into the top of the village I was staying in, and I had made pretty good time. It was 3 pm, and I’d done 29k in 7 hours. 3 pm is such a nice time to get into the gîte and get a shower and laundry done. If only it had been that easy.

First of all, I couldn’t find my gîte. I walked all the way down the village, following the GR signs, and I didn’t see it. Usually gîtes advertise so you know where to go. I ended up at another gîte on the outskirts of the village. I yelled out several “bonjour”s until a nice man who didn’t speak English told me where to go, and he let me cut across his property. He said I should head toward the church, then look for the building with blue shutters.

I went to look at the church, since it was one of the few that was actually open today, and then I found the house with blue shutters.

It took a while to figure out how to open the gate, and then I walked toward this very deserted looking building. I knocked on the door a few times, but it was dark inside and no one answered. I pulled out my phone, and for the first time on the Camino, I had no service. By this time it was 3:45. I thought maybe they didn’t open till 4, so I pulled out my book to check. There was nothing about what time it opened. I left my bag and walked up and down the street a few times, but I didn’t see anyone. I walked down toward the church, and saw the door open in the house next to the church. So I went up to this very old little lady, had to be at least in her 80s, and tried to explain in my very bad French that I had a reservation at the gîte but no one was there, and could I use her telephone? No telephone. But she pointed at a house and said to try there.

So I went over to knock on another door, which was right across the street from the gîte, but there was a solid wood door gate thing at the street. There was a door bell, so I rang it. I heard some sounds like someone was home, and then some yelling, so I thought maybe I should open it and peak in. I felt so bad when I saw a walker come out of the door way and another 80+ year old woman. She didn’t speak any English either, but she was so sweet, and she did have a telephone.

I called the number in the book and thankfully a man answered. He said yes they were expecting me, but the lady who would be taking care of me must have gotten confused on the time, and if I waited 10 minutes she should be there. That was a relief.

I ended up spending the next 30 minutes with Carcenac Rolande. After she let me use her phone, I asked if she would let me take her picture, and she was absolutely adorable, straightening her hair and her sweater. I told her she was very pretty, and she said I was a coquette. She gave me water and fed me grapes from her garden. She also told me about her son who works for an airline and travels to all these exotic countries, and showed me pictures of her grandchildren, etc. Of course there was just a lot I didn’t understand, but she seemed genuinely happy to help and to have the company. She said I was very brave to be traveling alone and not know the language. I don’t know about brave, maybe kind of stupid. I’ve gotten by so far, but only because the French people are so kind and patient.

We finally heard a car pull up next door at about 5 pm, and I thanked Carcenac for her help and she said it was her pleasure, and I do believe that it was.

Then I met Kushka. I have no idea how she spells it, but it sounds very Russian. She said her name means “eagle” in Mongol, “wild cat” in Russian, and “hard headed” in Basque. She was catching up with an old friend in Figeac and lost track of time. She was still in Figeac when the guy called her and said, “where are you??” So that’s why it took 30 mins for her to get here. She is a free spirit and says she’s an artist. She’s into organics and essential oils and himalayan salt lamps and cooking with olive oil instead of butter. At first she said she knew I was tired and wanted to take a shower, but then she said we should have some lemon water and crackers and talk.

I’m really glad I have a place to sleep tonight, and food for my belly.

I didn’t get out of the shower and finish my laundry until 6:45. I hope things are dry tomorrow.

The nice thing is that it’s just me. Hopefully I will sleep very well tonight.

Dinner was amazing. I am so full. I almost couldn’t eat it all.

First course was some melon and ham. I’ve heard that these things go together, but I don’t think I’ve actually had it before. Then the main course was a hash of potatoes, zucchini, and onions, and a breaded turkey breast with lime. She said it was green lemon, so unless there really are green lemons, I think it was lime. It was amazingly delicious. Lime on a breaded turkey breast. Who knew? Then the cheese course was more Rocamadour! And a simple tossed salad with basalmic and olive oil. Then the dessert was huge. A mixture of apples, plums and something else, with toasted almonds, creme fraiche and granulated sugar. I am so full.

Hopefully my feet hold up tomorrow. My thumb seems to be doing much better. I barely noticed it today.