I tried to sleep in this morning, but it didn’t work very well. I slept very well last night, so I woke up at 6. I stayed in bed for most of the morning uploading pictures, because it takes forever! For every post I have to pick out the pictures I want, then I have to resize them, then I have to upload them to my blog library, then I have to insert them into the blog posts. Making galleries saves some time, but the whole thing is a rather tedious process. It can take an hour just to upload the pics for one post.

My thumb was even more swollen and stiff this morning, and the puncture site is visible. I hope it’s not going to get infected.

I decided that I should probably do something interesting today, because I am in France, after all. I got out of bed at 11 and headed for the train station.

I ran into Tanya and Peter on the street and talked to them for a bit, but I didn’t want to be late for my train, so I had to go. Luckily, the train was late. I bought a ticket to Rocamadour for 5 E. The same price as my bunch of grapes. Let’s see… eat some grapes, or take a train to an awesome cliff-fortress city in France…

It was only a half hour train ride. It was kind of crazy moving that fast. If I walked, it would have taken 2 days. I had read on the forum that the train station is a bit of a walk into the city, but once I got off the train, the directions were vague. It’s a good thing I’m undaunted being in the middle of nowhere France and don’t know where I’m going! I headed down the street and ran into a sign that said, with an arrow pointing the direction, “Rocamador 4k”. Oh good, 4k there means 4k back, and who knows how long walking around the city. It’s a good thing this is my rest day. And it was raining. Yay! Luckily it didn’t rain very hard, but it did rain off and on the whole rest of the day.

It was actually a quite nice, mostly flat, walk, and it was nice to walk without 20+ lbs on my back. It took about an hour to get where I was going. 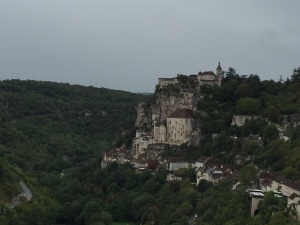 It’s a highly touristy area. Lots of people from England, and I heard my first Americans besides Megan in two weeks.

It was 1:00 when I got there, so the perfect lunch time. I found a place that also served crêpes, because I really wanted one, and haven’t had one yet. A nutella crêpe is what I want. So I sat down and ordered a salad that seemed to be a local specialty, and a nutella crêpe. She said she would bring the crêpe out later as dessert, at least, that’s what I thought she said.

A salad with smoked duck, tomatoes, walnuts, and a toast with rocamadour cheese and honey. Monique told me about the cheese and how fabulous it was. She was right. It’s amazing. Some of their cheese, when it gets old enough, starts liquefying. It sounds gross, but it tastes so good. When she brought it out, I thought it was eggs at first. They’re even kind of runny like eggs. But cheese.

So I finished my salad, and waited. After about 25 minutes she brought me a menu and walked away. So then I got up and went to pay, and said I didn’t want to wait anymore. I’d already ordered at the beginning! It was super annoying. I wanted my nutella crêpe! But I’d also already sat there for an hour, and I wanted to catch the 5:00 train back to Figeac.

I headed up the steps up to the various chapels and stuff.  At some points it made me feel like I was in Minas Tirith.

At the very top there’s a chateau, and you can pay an extra 2 E to go through a gate and walk on the ramparts. I figured, since I was there, might as well.

I headed back along the top of the cliff, instead of going back down into the city. 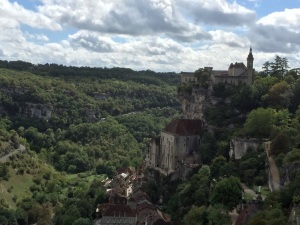 I got back to the train station with plenty of time to spare. For some reason the ticket back to Figeac cost 9E, almost twice as much. I don’t know if it was because I had to buy the ticket on the train.

I sent Megan a text, because we were supposed to meet up tonight.

I got back into town and went to my hotel. I asked the lady if Anick had checked in, and she said Anick called and cancelled around noon. I got a text from Megan saying she wouldn’t be in Figeac until tomorrow.

I had the lady try to book my accommodation for tomorrow, but every place I tried in the Cele valley was booked. So then I had her try for Saturday night instead of Friday. She left a message at a place for them to call her back. At this point it was almost 7, which is dinner time, and she had to go. She said she would be back in an hour.

I headed off to the city to find some food. I went by a pizza place and thought, why not? I ordered a Texane pizza, which is tomato, cheese, ground beef, onions, olives, and egg. My pizza looks surprised.

Luckily there was a lot of ground beef, because my meat has been lacking lately. I don’t know if you noticed, but the dinner at the Christian place was vegetarian. I definitely noticed it the next morning.

While I was waiting for my pizza, I went to a pharmacy and bought a new nail clippers. 3.90E!! So expensive. Trying to save some money and weight by getting a clipper at the dollar store did not save me anything.

I got the pizza back to my hotel, and was scarfing it down, when the lady came to my room. She said the hotel had called back and they said Saturday was good. I wanted her to help me book some more, but it was too late. She said she could help in the morning. One day doesn’t help me if I can’t get the days after.

Hopefully I can get booked through Cahors tomorrow. Things are not going as planned, but that’s probably ok. It’s a good thing I have some buffer days.

I still didn’t get my crêpe. Maybe tomorrow.