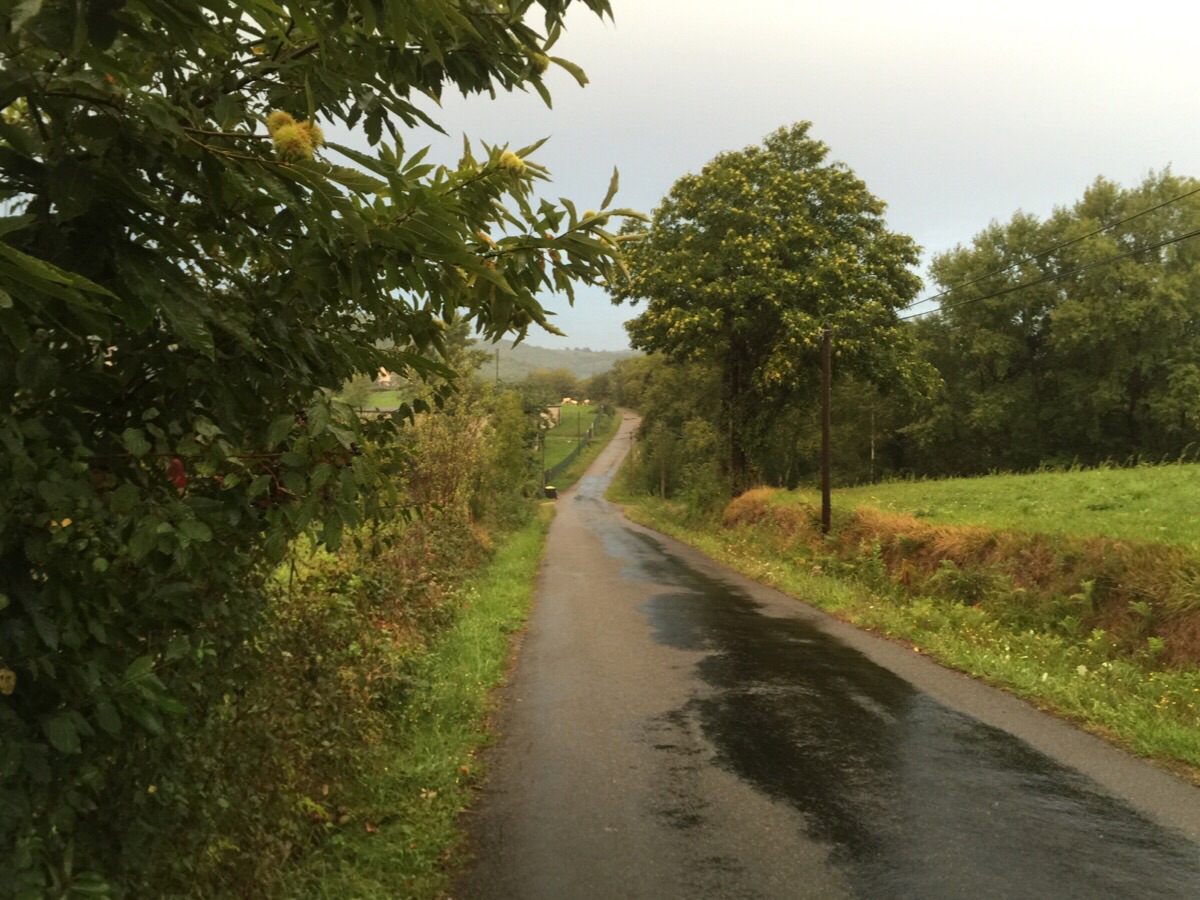 Last night was pretty bad. I fell asleep quickly, which was good. I took two melatonin and put my buff over my eyes, and I think I was asleep before most people came to bed. I was sharing a room with 4 other people. I think two of them snored all night. Either it was one very fast snorer, or two in syncopy. Why is snoring even a thing? Life has enough hardships, why does snoring even have to exist? I woke up at 3, and took another melatonin. I slept fitfully, between the snoring and my hurting hand, and when people started getting up at 6, I decided I might as well. Part of me wanted to sleep after everyone was gone, but a bigger part of me just wanted to get out of there and put it all behind me. I ate as small of a breakfast as I could manage, and was out the door, in the rain, by 7:40.

It really wasn’t a bad place to stay, I just had a bad experience. And I’m really getting tired of these long French dinners. I think it’s nice in general. It’s a very social occasion, and the conversation is probably even more important than the food. BUT, as a pilgrim who is tired after a long day of walking, and as an introvert who really doesn’t care, especially when I can’t understand the conversation anyway, I’m getting very tired of having dinner take 2-3 hours, and well past 9, which is a good bedtime. It’s awkward for me, because I have to decide when to get up from the table. I have to stay there for a polite amount of time, and it’s hard to know what that is. Last night I got up and the host said, “oh, you’re tired,” Yes, I’m tired, but I also can’t understand what you’re saying anyway, and I am in a massive amount of pain. It would be different with people I know, even if I still don’t understand the conversation. Anyway, that’s another reason for me to try to stick with chambre d’hôtes more than gîtes. Sleep is also very important to me.

Yup, it was raining. One of the reasons I wanted to go from Conques to Figeac in 2 days was because it was supposed to rain on the third day. It had apparently rained through the night. The trails were a muddy mess, and I had about 27k to go.

My thumb felt much better, but it was tight and swollen, and slightly numb. At least I wasn’t in constant, throbbing, sharp pain anymore. It still hurts a bit as I’m typing this.

Down the mountain into Livinhac le-Haut. I slogged up to the church and main square. The church was closed, but I found an open boulangerie, and bought my usual: two croissants and a quiche.

I met up with the crowd that had stayed in that town and was just leaving for the morning. A man called to me from across the square and asked how my hand was doing. I didn’t recognize him at all, but he recognized me and remembered my name. I told him it was doing much better.

At the top of the climb out of the city, the rain had cleared and the blue sky started to show. I took off my rain coat and stuck it to my pack so it could dry. It only rained for about an hour, but I was still damp. Not soaked, thankfully.

It was quite a large group I was behind, so the trail was a muddy, swampy mess. It made the going a bit slower. I ran into some ladies who also remembered me from the night before and asked about my hand. It was terribly sweet.

I found my small breakfast catching up with me rather quickly. Usually if I eat well, I’m good for about 5 hours and 12 miles. I found myself eating my croissants and quiche at 10. I was also just tired. I had less energy than usual, and I’m positive it was due to the poor sleep.

After that last up, the hills were much more gentle, and there was even quite a bit of flat. It was very nice, considering the distance I had to go. The last 27k day I had took 9 hours. This one took about 7, and that was with a 45 minute break for lunch.

I came to a little village (not even a village, probably a group of 3-4 houses) that advertised a pilgrim rest stop with food. My feet were killing me, so a sit down and some food was exactly what I needed. I had a salad with ham, and a big pitcher of water. They also happened to have wifi, so I managed to make a post while I ate.

The rest was very helpful, and I was able to walk for another 1.5 hours with relatively little pain. My feet just aren’t holding up as well for as long as they did at the beginning. I don’t know if my shoes are breaking down too quickly, or if my poor feet are just tired of taking a pounding. I had decided, though, that rest days are a necessity, and I’m taking my first one tomorrow.

I passed through a couple of other small towns with churches.

I also passed by my first pigs. Rather large sows, lying down in the dirt, right next to the fence. I approached the fence to take a pic, and the sow started grunting, almost clucking like a chicken. I could tell she was annoyed, so I took a quick pic and turned around to leave. 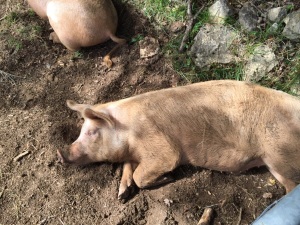 As I turned around, I saw a man standing behind the fence on the other side of the path. I thought at first he was the farmer, and was upset that I was disturbing his pigs. I said, “Bonjour,” and then I noticed that he wasn’t wearing any pants. So then I thought maybe I had accidentally caught someone with their pants down, but then I just realized he wasn’t wearing any pants. He was only wearing a shirt. He started to talk to me, but I just put my hand up and walked on. I had hoped I wouldn’t run into any of that until Spain. I’d hoped I wouldn’t run into any of it at all! I guess it’s common enough that it can’t be avoided. Sorry, no pictures.

Then it was the long descent into Figeac, a rather large city with lots of traffic, but still nicer than Decazeville.

As I was crossing the bridge, another pilgrim came up behind me and told me I’d lost a sock. The socks I have don’t dry overnight, so I hang them from my pack with safety pins. One of them had come open, and my sock fell off. I do have another pair of socks, but I really should have a spare. I’m rather sad about the sock, and so early on, too. It’s been a tough couple of days. I hope Anick is happy with my pilgrim pain and suffering!

I found my hotel rather quickly. Since it’s in the pilgrim book, I figured it would be close to the pilgrim route, and it was. They had room assignments posted on the door, and I was pretty sure I was the “Mr. Armstrong”. When the office of tourisme lady was making the reservation, she said my name was Armstrong, and I didn’t correct her. I figured it would be easier. The lady here speaks English, which is nice. I asked if I could have two nights instead of just one. I am going to sleep in tomorrow.

I took a shower and headed out into the city to look for some food. A boulangerie or a grocery store. I found a “Casino” store, which is the name of a store, and they make a lot of their own food, I had bought something before that was casino brand. I bought some bread, butter, and jam for tomorrow morning, and I also got some laundry detergent. I don’t think the stuff I brought works very well.

I also decided to get some fruit, so I got some grapes, peaches, clementines, and bananas. I totally got ripped off. The guy charged me the 1kg weight on everything. My eyes bulged when he rang it up, but I went ahead and payed it. I thought it was wrong, but I was taken off guard and didn’t really know how to say anything about it, which is probably exactly what he was counting on. I don’t even know why he did it. It’s on the receipt, so it’s not like he can pocket the difference.

So now I’m typing and eating my 5 E bunch of grapes. The last bunch of grapes I bought was .5 E. Oh well. I’ll be better prepared next time. I also bought a sub sandwich from a shop, because I decided I’d rather eat in my room and sleep than stay up and go to a restaurant. You can’t eat whenever you want here. Restaurants don’t open for dinner until 7.

I found the church, and it’s massive. It’s hard to tell if it’s bigger or smaller than the one in Conques. It doesn’t have an upper level, but it has a lot more side chapels and shrines, or whatever they’re called. It definitely had more stained glass than Conques.

It feels so good to have my feet up on a bed. It seems kind of weird that I’m not leaving in the morning, but I think it’s the right decision.