Iain was right, he is a prodigious snorer. Even with my earplugs I could still hear him. Thankfully I have had no trouble sleeping so far. I wake up sometimes, but I always fall back asleep. I usually wake up because I’m dreaming it’s time to get up.

This morning I experienced my first bit of “Camino Racing.” Apparently on the Camino Frances, during the busy season, there is competition for beds in albergues. So some people get up very early, like 4:30 or 5, to be the first in line at the place they want to stop, to make sure they have a place to sleep. Iain had asked me last night what time I was getting up, and I said, “oh, I don’t know, it depends how far I’m going, and what time my gîte opens. I’ll eat breakfast before 8.” And Iain was just beside himself, “oh no, you have to get up and they kick you out before 8.” Most of my gîtes haven’t opened before 3, and sometimes 4. There’s no point in rushing around just to wait. I told Iain that, and he said, “what do you mean, wait?” Anyway, apparently the rhythms on the two caminos are very different. I think I prefer the laid back way of the French. And most people who do it are on holiday, they don’t want to get up before 7.

So this morning all 3 of my roommates were raring to go at 6:30, and I tried to stay in bed until 7:30. When they left Nicholas said, “I guess we won’t see you again.” Haha. I just don’t get it. I hope I like Spain when I get there.

I had a nice breakfast, and two cups of hot chocolate! I asked the gîte owner to book my next two nights for me, and he was happy to oblige. I was out the door by 8:30, which is earlier than yesterday.

I ran into Pru and Bronnie having their breakfast. It seems like almost everyone I ran into today was heading to the same place, Nasbinals. 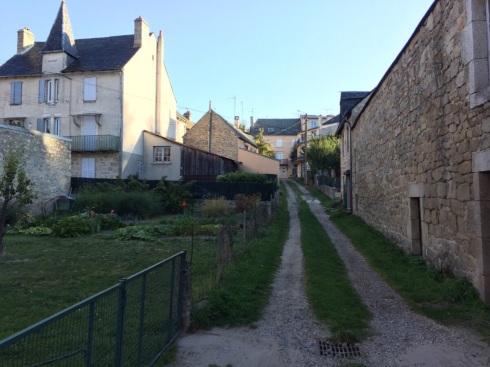 Kyoko ended her chemin yesterday and today had to start her way back to the airport to go home. She said she’d quit her job to come here, just like I did, but she walked for less than a week! It doesn’t seem worth it. I mean, if you’re going to do it, and you’ve quit your job to do it, you might as well get your plane ticket’s worth!

Shortly out of town Megan caught up with me as I was taking pictures. We have a similar pace, so we stayed together for several hours. It was nice to be able to talk to someone else, not only in English, but very rapid English! It is still very odd to hear an American accent, though. We had a lovely few hours walking and talking.

I went through a tunnel with some interesting graffitti. Hopefully nothing offensive.

It’s fun to see how the landscape is changing. Today we left the trees and it became much more dry and open. There was not a whole lot of shade. The weather was still lovely. A little chilly, and a nice breeze. Probably in the low 60s. 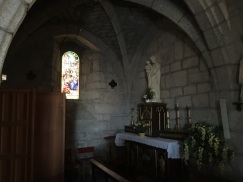 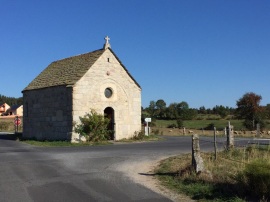 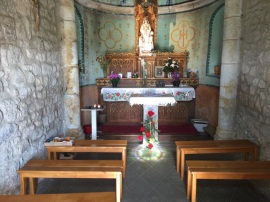 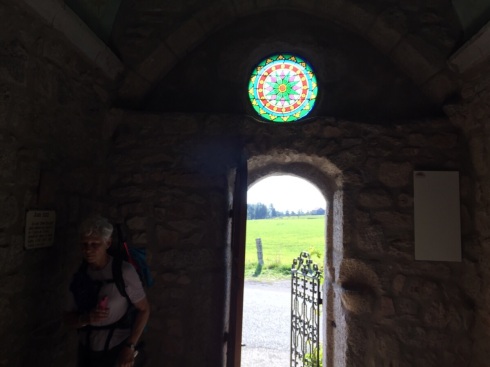 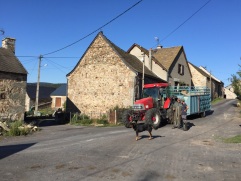 We ran into Etienne’s group and said hi for a few minutes. It’s so fun to keep running into old friends. 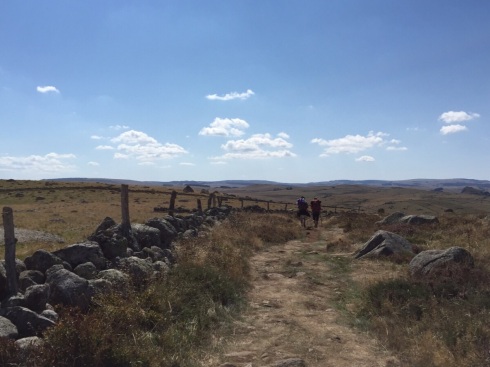 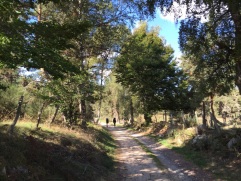 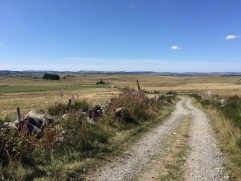 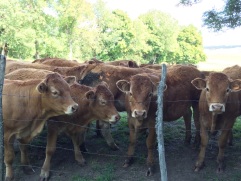 Potable water. I used it! 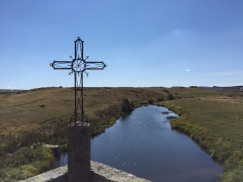 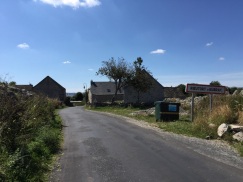 When I stopped to have my lunch, I was passed by the same people who passed me yesterday while I was having lunch. I realized that what I bought for lunch is going to last me several days. I’d asked Nicholas how long my cheese will last outside of the fridge. He said about 5 days, but that it will get stronger every day. I definitely went overboard by buying both brie and camembert, but I had a suspicion I wouldn’t like one of them. I’m not as fond of the camembert. It’s not really bad, but it’s a bit of a stinky cheese. Brie is just fabulous.

I got into Nasbinals about 3 pm. My gîte was difficult to find, because they’re doing construction on the most direct street. I finally made it. It’s an odd place. Kind of a mix between a school and a hotel. Maybe it’s a hotel in an old school. I ran into Monique’s group coming down the stairs, and there was a joyous reunion, and I even got the double kiss. I guess that means something! I made plans to go to dinner with them tonight. 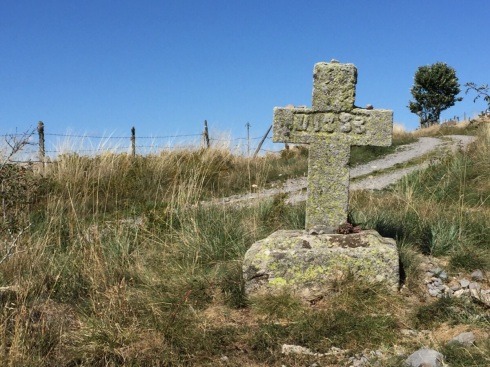 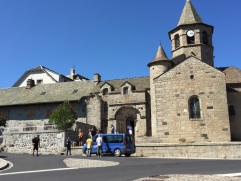 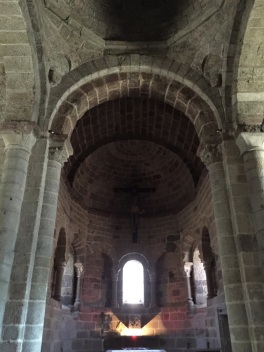 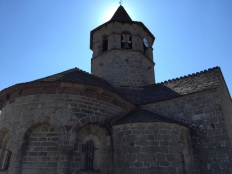 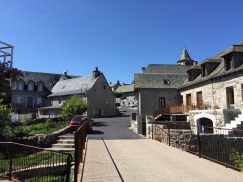 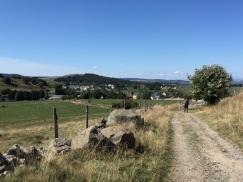 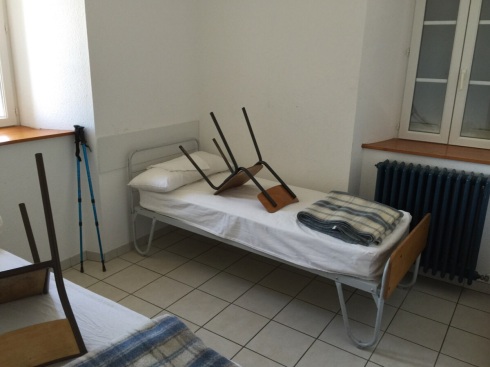 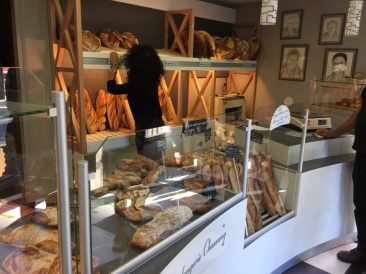 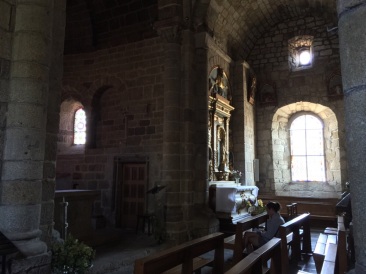 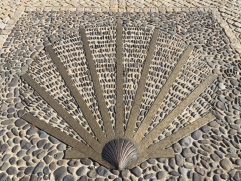 I have a room to myself, and there’s quite a bit of mold on the ceiling over the door. I just recently discovered it’s because the ceiling leaks.

After my shower and laundry, I headed into town to take a some pictures, and to see if I could find some food for breakfast. This place does not have demi-pension, and it also doesn’t really appear to have a host. I’m afraid I won’t be able to get a stamp.

I ran into Anick (pronounced Ah-neek, she’s from Montreal) and she showed me around the little store and gave me some advice on what to get. So I always thought pâté was liver, but it’s not. There are tons of different kinds of pâté! I got a can of rabbit pâté to try tomorrow. I need to eat this food I’m carrying around.

Once again, I’m at a place that says it has wifi, but I can’t connect to it. Hopefully I will be able to update soon.

I went to dinner with Anick, Monique and her crew Fon-Fon (that has to be a nick name) and Franscoise, and 3 other friends they’ve met along the way. It was quite boisterous. They are very loud and apparently it’s no big deal. Anick said it’s not just because they’re French, but because they’re from southern France. It was quite an entertaining meal. 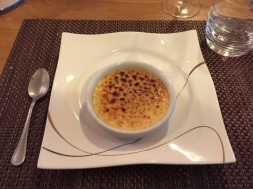 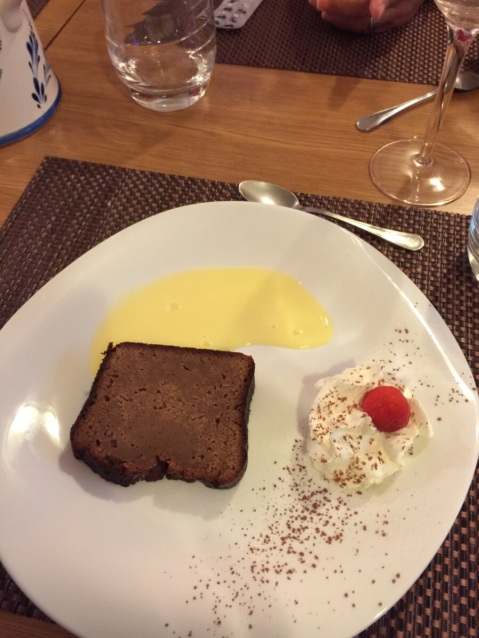 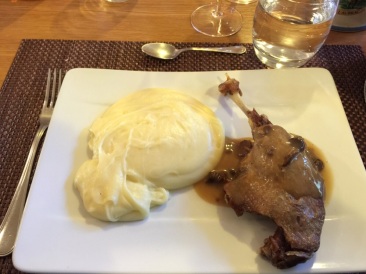 I got the duck confit with aligot, and creme brulee for desert. Again, really not a big creme brulee fan, but since I’m in France…

It sounds like we’re going to split up from here, since I’m going quite a bit farther tomorrow than everyone else. I think.