I think I slept pretty well. I didn’t wake up as much as I usually do, but maybe that’s also because I got up two hours earlier than I usually do. I felt Marita get down off the top bunk, and I thought, “I really hope she’s just going to the bathroom,” but no, it was 4:45, time to get up.

For some reason I started sneezing like crazy and my nose was really running. I am definitely reacting to something in the area. I’m glad it didn’t happen during the night.

We were out the door by 5:35. It was dark, but it was partly cloudy, so only a few stars were out.

We came to a red light and train bar down. I insisted a train was coming, but they didn’t think so, so they crawled under the bar. No train. I crawled under too, and it was very difficult with the pack. The train did some eventually, but it was much later. Idk why the bar was down so early.

We walked in the dark along the canal and watched as the sky gradually changed. It was really lovely. I don’t think I’d like to leave in the total dark every morning, but it’s nice sometimes. And the weather was perfect. 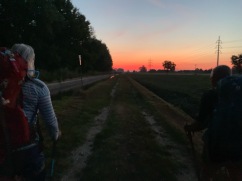 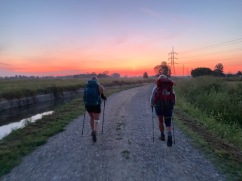 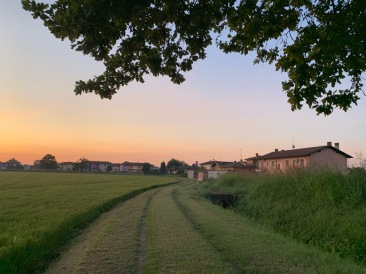 I mentioned that it was September 11th, and we all shared stories about where we were when we found out. It really touched me that it had such an impact on people from Europe as well. It really did change the world, and not just the US.

We got to Gropello Cairoli a little after 7 and stopped at a cafe. I had peach juice and a chocolate croissant. The croissant was 1 E, the juice was 2.50, for a little glass.

As we were sitting at the cafe, we saw Beryl and Alain. 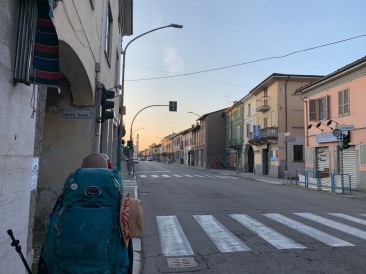 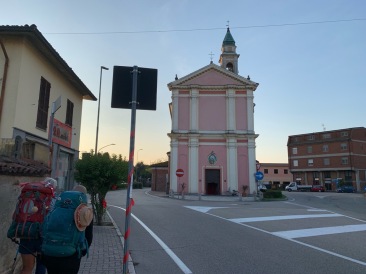 We were on our way again. My ankle was going ok, but we were walking a little faster than I would have by myself, especially with the ankle.

We followed a road for a while, and it was actually a pretty busy road, of course with no shoulder.

Then we went down off the road to follow the river, which was nice, but it was through kind of tall grass, so that actually pulled a bit at my foot. My ankle started hurting a bit. 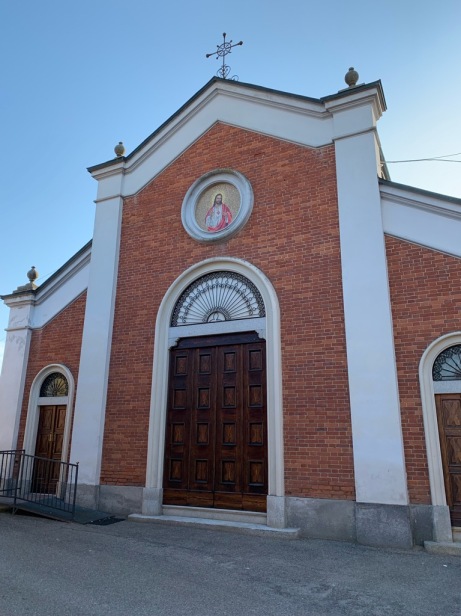 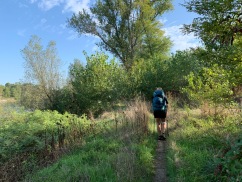 We stopped again for another break at a little bar by the river and by the time we started again we were worried we weren’t going to make it by noon.

Marita set a fierce pace. I was lagging behind, and really had to push to keep up. Today was definitely not a good day for my ankle, but I also didn’t have any of those severe pains, so that’s something.

We could see Pavia as we walked along the river. There are 3 bridges, the last one being a long, covered bridge. The ostello is south of the city across the river. Actually, I don’t know if it’s really south or if that’s just how my app orients. 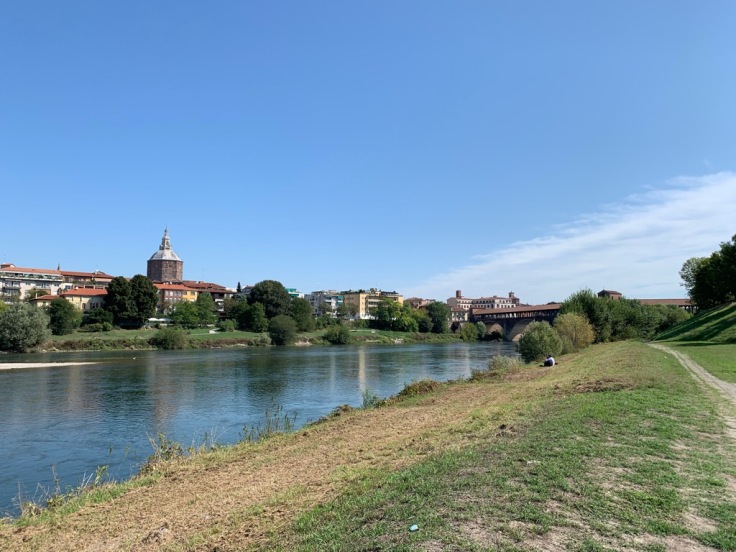 We made it with a 15 minutes to spare. We really booked it.

Elisa, the host, said she might be able to put me in a 5 room with 4 other people for the second night, but she would have to ask them. It turns out it was 4 of the people from the Abbey in Mortara, but I know at least one of them snores. But it’s ok. I will survive, and I have a place to leave my pack while I go to Milan. The 4 of them are actually going to Milan as well!

We took showers and then I wanted to get lunch. Marita and Petra came with me and they had some drinks and snacks.

I had pesto, then grilled meat and a salad. It was an excellent lunch.

We came back to the ostello and Petra and I took naps. I might have slept a little, but not much. I know I did drool some on my pillow,

Marita woke us up at 3 to go into the city to explore and see the cathedral. 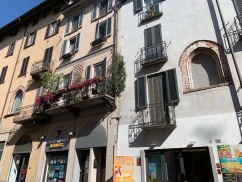 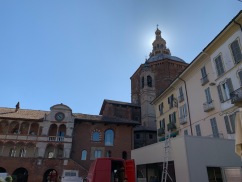 It was quite a long walk. We put another 6k onto our day.

There are a lot of Traveling people here in this city.

The Cathedral is HUGE. It’s hard to describe the scale. Just a massive building on the inside. The dome is the third largest in Italy behind Florence and St. Peter’s.

They have the body of the first bishop of Pavia on display, and you can actually see the bones. 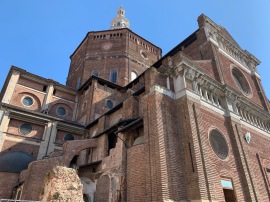 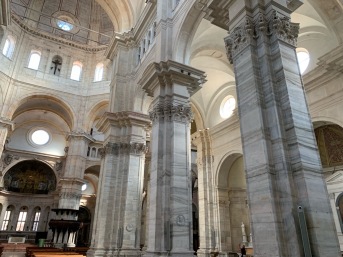 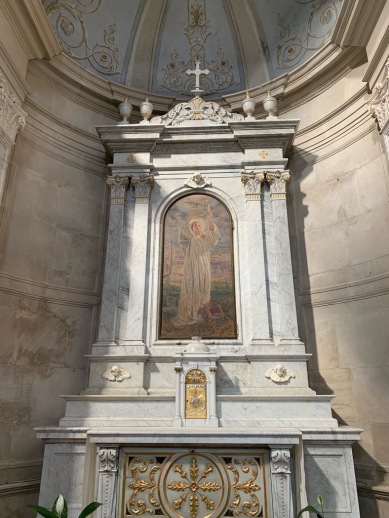 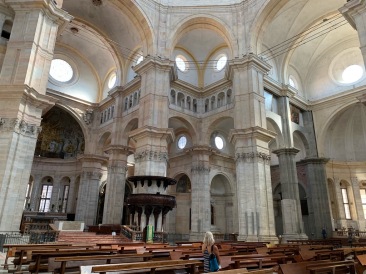 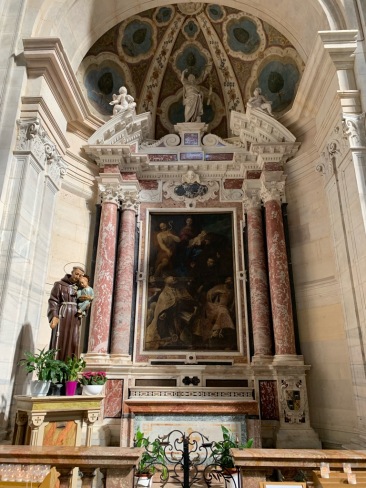 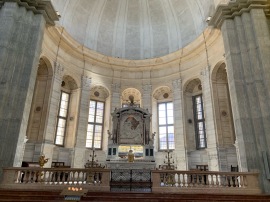 Then we walked all the way to the train station so I could know where it is for tomorrow and buy my tickets so I’d be prepared. The tickets are anytime use and only 4 E each way.

We stopped for some gelato as well. 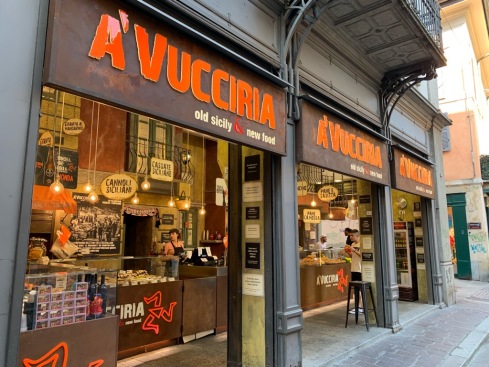 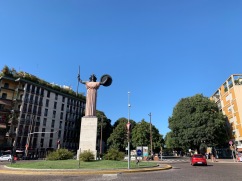 We walked back into the city to one of the piazzas so Petra and Marita could have some wine. The drinks came with a snack tray. They ordered a second glass, but without the snacks, and the price was still the same. 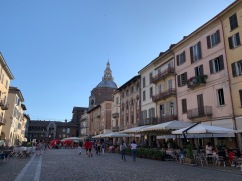 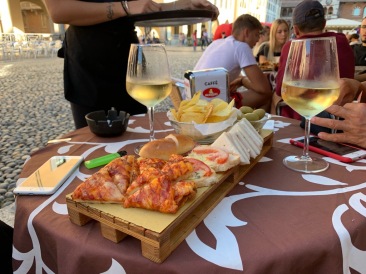 I left just after 6 to come back to the ostello to get another dinner ticket before the lady left at 6:30. And I need to try to catch up on my blog! I won’t have much time tomorrow to catch up.

We had dinner with two other couples. I had the ragu, fish, and mixed salad. 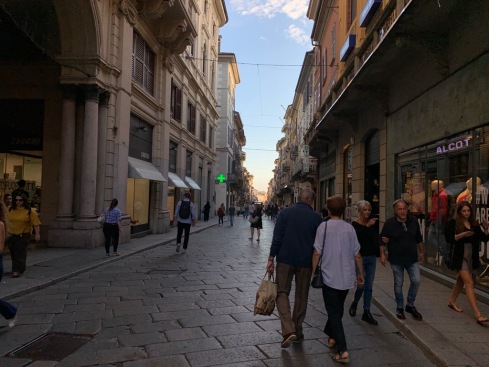 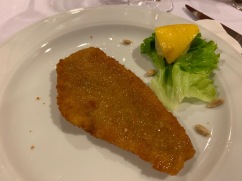