I think I was actually able to sleep pretty well. There was a fan, so the temperature was pretty great. I did wake up a ton, but I still feel like I slept well.

When I woke up around 7, I checked the weather. It looked like it hadn’t rained all night after all, and I had a moment where I wondered if I had made a mistake. But it rained all day till about 3 pm, and it was cold rain.

I went for breakfast and ate way too many sweet things. I asked for hot chocolate, but it was more of a sludge, and not even a good sludge. The breakfasts in Italy are definitely sweeter.

I went back to my room and pretty much dozed until about noon. It was very nice. I didn’t really want to take a rest day at this point, but I wasn’t going to waste it, either.

For a bit I had the window open and let the cold air come in while I snuggled under my blankets.

The rain let up around 3, and it looked like it might start again later, so I decided to go out. I knocked on Terri’s door just as she was putting on her shoes. She asked if I read her mind. I just wanted to know if she had been out and found a stamp, but she was just on her way as well, so we went together.

We tried to go find the tourist info center, but I don’t think it was really there. We went to the cathedral, and they didn’t have a stamp lying out, but Terri found a man to ask, and sure enough he gave us stamps. 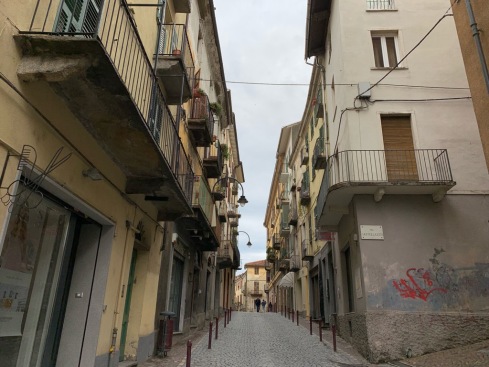 The Cathedral is gorgeous. I think it’s so interesting how the churches are so different between Italy and France. There are many less windows in Italy, and they’re darker. I think it’s so they can have more canvass for paintings, because everything is painted. In France, a lot of the art is in the windows and the really high ceilings. 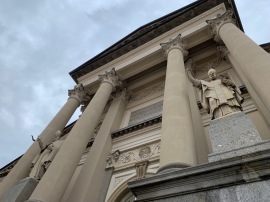 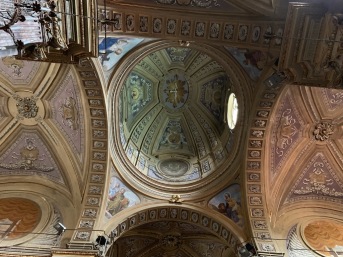 After the cathedral we went to a pastry shop where Terri got some food, and I decided to buy 6 cream puffs for later. I also got some bread from a shop earlier for breakfast tomorrow. Then we found a grocery so I could get some fruit as well.

We went back to the hotel but decided to meet again at 7 for dinner.

I decided to try to book the Ostello in Santhia. It has good reviews, and I’m spending a lot of money. I don’t need to be in a hotel every day, but they are so much easier to book online. The language barrier is scary. I called the number and sure enough she didn’t speak any English, but she gave me the number for the man who could tell me how to find the keys. He did speak some English, so that went much better. He said there are going to be 11 pilgrims tomorrow so we have to share rooms. Of course, that’s what I was expecting. It was terrifying, but I did it!

Terri and I met for dinner and ended up at the burger place right next door. My burger was really, really good.

We had a lovely dinner. I came back to the hotel and ate my cream puffs. The raspberry was the best. The orange one and the pistachio were interesting. 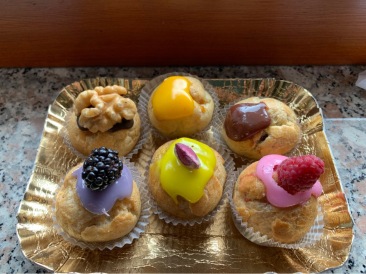 Tomorrow is going to be a good day!