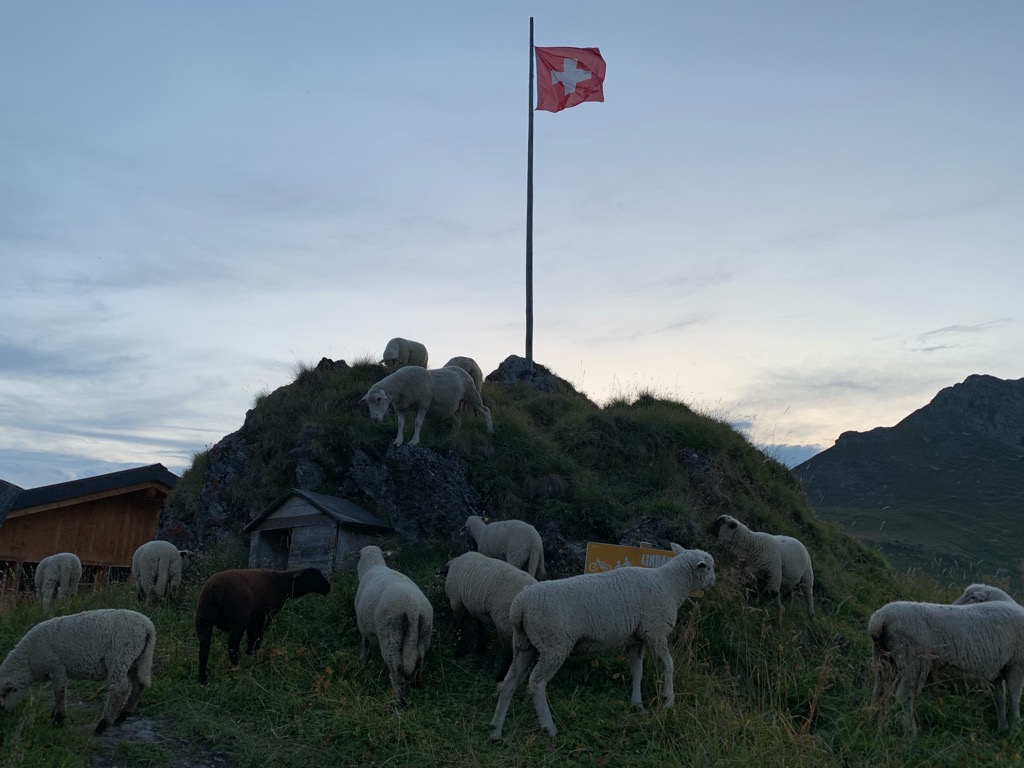 Bless this hotel for having a sheet and a thin cover. Even though the bed was hard I still slept pretty well. I had a hard time getting to sleep, because my legs and knees and feet were really protesting. I am definitely worried about my knees. I think I did pull something in my back when I fell, but so far that’s doing ok, too.

Another late breakfast starting at 8, but I really think it’s a good idea that I eat in the morning since I’m not eating lunch. Breakfast was actually pretty good. I noticed the Nutella too late to use it, but that’s ok. I’m sure I don’t need that much sugar. He made some eggs, too, and I went ahead and had some. Sometimes eggs don’t like my stomach, so I was a little worried about that with walking, but I thought the extra protein would be good, too.

I had to make a choice this morning. I did get pretty burnt yesterday, so normally I would wear the long sleeve for some more protection. But I’m going to be sleeping at 2000m, and I figured I would want the long sleeve clean for extra warmth at night.

I was walking by 8:40. Today was supposed to be 8 hours. I took some ibuprofen and prednisone this morning. I was definitely sluggish and feeling the result of yesterday.

I followed the path toward the mountain until it came to a stream. The signs said to stay on this side of it, but my app clearly showed I was supposed to cross. I crossed, and found where the trail used to be. It obviously isn’t being kept up. I was walking through weeds. It wasn’t the worst trail I’ve been on. My shoes were starting to get wet from the vegetation.

The path came out onto a field, and there was no obvious way across. This trail had obviously been abandoned a while ago. I had no choice but to cut through the field. My feet got pretty well soaked. 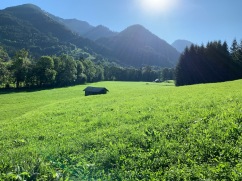 I connected with the real trail and started walking up the mountain.

It was very slow going. It was a big difference from yesterday. I did not push myself. The sign said Col de Bassachaux was 6 hours away, so I should get there around 3. I like having these time estimates, because it helps me know how I am doing.

Today was a lot of up. At the beginning it was mostly through the woods on the side of the mountain. There weren’t a lot of views, but every once in a while something would pop through. 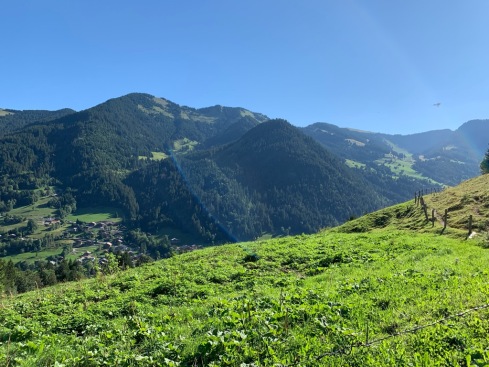 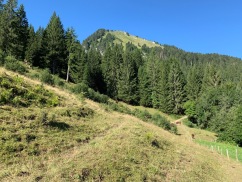 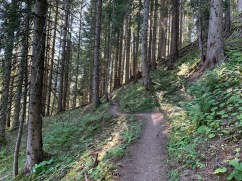 It was a difficult first two hours, just going up slowly through the woods. But it was beautiful, and the weather was nice.

I made it to a little open meadow valley thing. There was something poking my heel, so I sat down to take off my shoe and fix it. My socks were more than damp, so I decided to change them. Foot care! They probably would have been fine, but you never know.

After sitting for a bit and drying my feet, I continued on up to the next pass. I got passed by a couple and their husky. 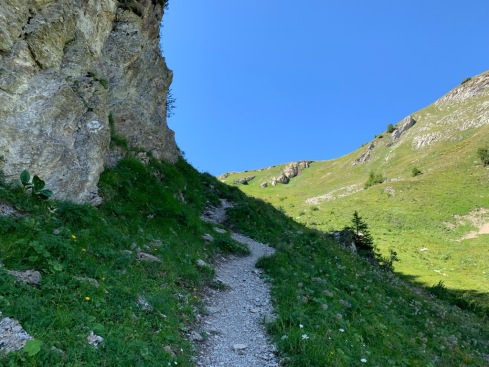 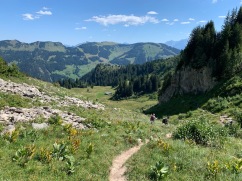 At the top there were new views, and a large open field. I started going down immediately. It’s kind of sad that you do all that hard work just to go straight down, but that’s what you have to do to go from mountain to mountain.

It was actually a pretty nice descent through some cows. I love hearing the cow bells. You always hear them before you see them. I wonder how this cow thing works. They are dairy cows. There is local cheese, and the cows are in these mountain pastures because there’s nothing else, but how does that work? Do they still get milked twice a day? Do they round them all up for milking? It seems like a lot of work. 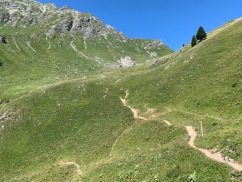 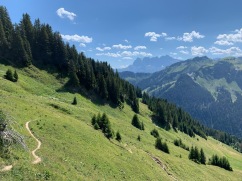 After going down, I started back up a road on the side of the other mountain. This was actually pretty nice. Because it was a road, and not a logging road, the grade wasn’t too bad. I was also in more a rhythm at this point, so I was feeling better than I had this morning.

There is a festival of some sort going on in the valley today. They were having a huge party at the ski resort across the valley on the other mountain. I could hear the music, but it was hard to tell what it was. Maybe local folk music and yodeling? 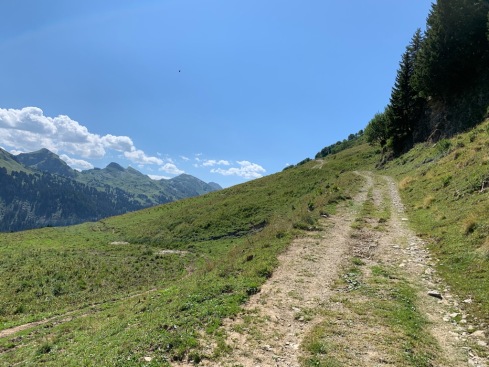 After some switchbacks, I got to walk almost level for several kilometers. That was really nice! It made me feel like I was getting somewhere. I could look back and see the summit of Mt. Grange, and I was glad I didn’t do it. It would have been a 3.5 hour detour. 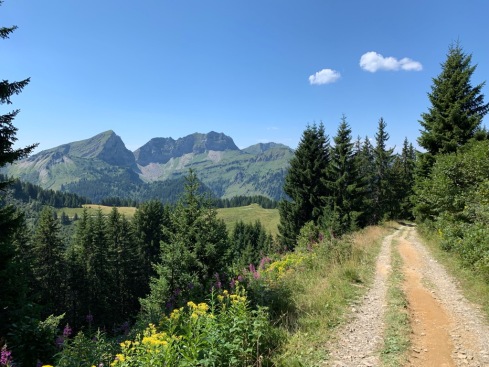 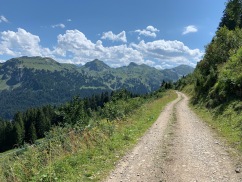 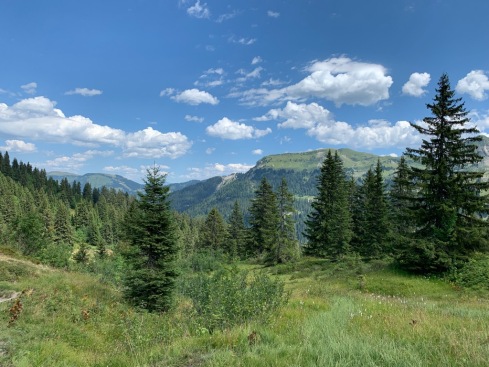 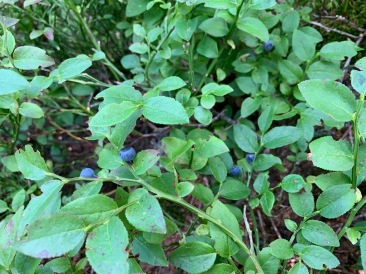 I made it to the Col right about 2:30, so even though I felt like I was moving slow, I was still slightly ahead. This was a popular tourist place, and they even had helicopter rides. 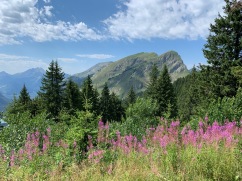 I started walking to the next Col de Chésery, which was my destination for today.

People were riding the ski lift up the mountain.

Going up to the Col, there were two paths. One for bikes and one for walkers. It’s a good thing, because there were a lot of people riding bikes, and very fast. 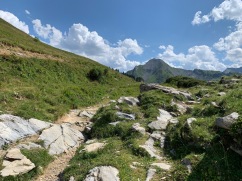 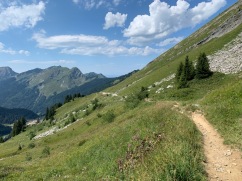 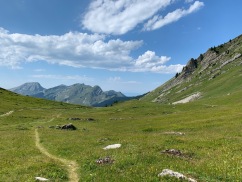 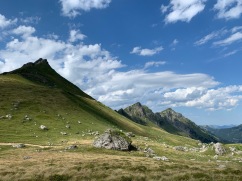 As I approached the Col, I could see a building on top of a mountain. I really hoped that wasn’t where I was going, but I really didn’t think it was. There was a ski lift going up, and I don’t think a refuge has that kind of money.

The app I’m using is French, so it only shows close up maps of inside France. Crossing the Col I go into Switzerland, and my map kind of goes away. I didn’t know where the refuge was, but I assumed it had to be pretty obvious. Thankfully it was. But it was also way smaller than I thought was possible. Where was the dormitory? Turns out it’s a sardine situation! 6 beds on the lower bunk and 6 on the top. I took a lower bunk. 100% there will be someone snoring tonight. Hopefully I can still sleep. 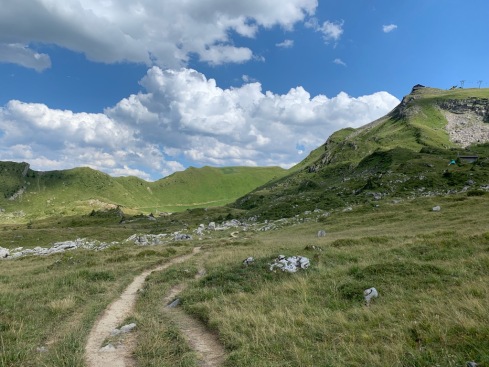 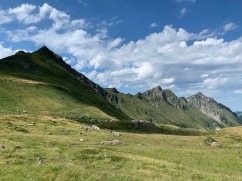 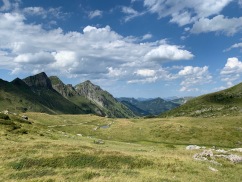 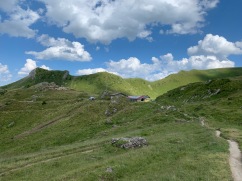 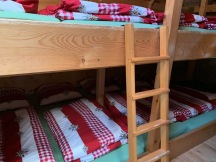 I took a shower and managed to wash all my clothes before anyone else needed the bathroom. With two late check ins the past two days, I really needed to wash my clothes.

I’m in Switzerland! It’s a beautiful place where the Refuge is, but it’s not as stunning as the Refuge I passed yesterday. That’s ok! This is definitely an experience. There is definitely no WiFi here.

Someone stole one of my binder clips I use to hang my laundry! I wonder why. It didn’t just fall off, because they used one clip to hold up two things, so it was obviously tempered with. I hope I brought enough extra for losses. Well, I guess the more likely scenario is one of them fell off, and some kind soul noticed and used one of the other ones to help hold it.

I’m testing the bed right now, and it’s actually pretty comfortable. There’s an open hole in the wall to let air through, so it will probably get pretty cold. I will probably sweat and freeze. I did bring my wool tights, so I will eat those tonight. I don’t wear socks at night, but maybe I should tonight.

Wow the bed really is comfortable.

Dinner was actually very good. They could have given us a little bit more of it, but it was still quite acceptable.

There was a hearty vegetable soup, then a carrot salad and pasta with a meat and mushroom sauce. Dessert was chocolate pudding. 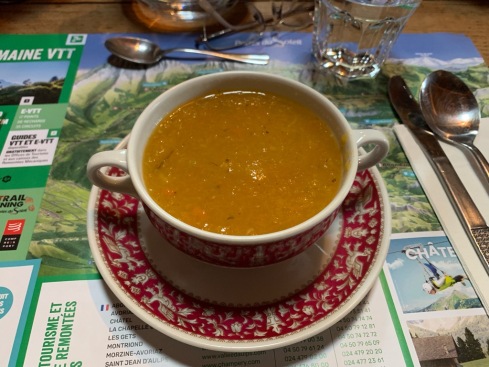 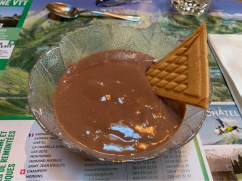 Some people are just going to Chamonix. There’s a pair of Scottish guys going about halfway. I’m not familiar enough with the GR 5 towns to remember what it was. Two are going the full distance.

After dinner the sheep came in. That was fun to watch. They spend the night on the hill next to the refuge. When it was time for “bed”, the shepherd made a whistle, warbling, noise, and all of the sheep that weren’t on the hill came running.