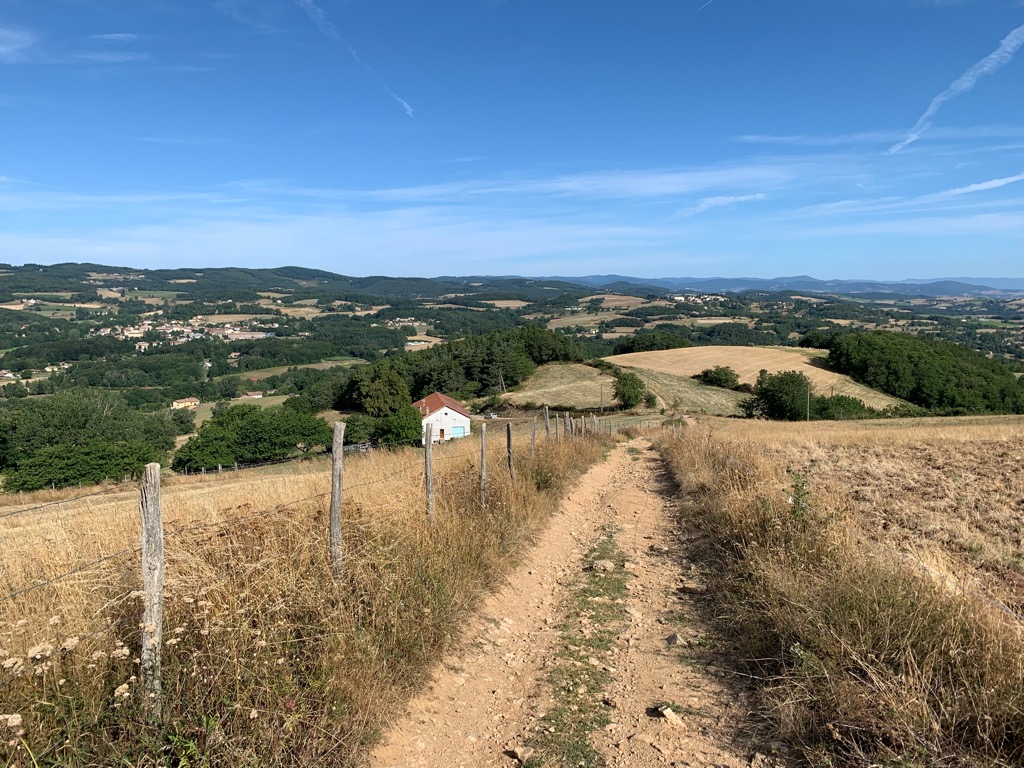 I woke up at 4:30. I was really hoping I wouldn’t bring that with me, especially with all the walking I’m doing. But no, I was awake at 4:30. And I was in a lot of pain. My knee hurt just bending it lying in bed, so that was definitely a worry. Between the bedroom and the bathroom there is a platform, so you have to step up and down. I got a sharp pain in my knee every time. I figured I would pay some kind of price for yesterday, but I hope it’s not going to be permanent for the rest of the walk.

I was too tired last night to try to find a place to stay, so I took advantage of waking up early to look for something. I happened to find an AirBnB really close to the route in Roche de Glun. It was pretty much perfect. Definitely pricey without dinner, but I really had no other option. I requested the booking and got a notification at 7:30 that it had been accepted. 7:30 is also when I was finally starting to fall back asleep, but of course, it was time to get up.

Breakfast was a lot. There was cheese and meat and a muffin thing as well as the usual. I think I ate a little too much.

I got all packed up and was on my way just after 9. There’s a moment when you first get going in the morning. Where you pick up your bag, that seems much heavier than it did the day before, and you put it on your back, and your hips hurt more than they did before, and you think, “how am I going to do this?” But as soon as you start walking, everything melds together and it’s not impossible anymore, it’s just part of your body and it’s ok. This morning was a little rougher, though, probably because of yesterday, but also I think because I ate too much breakfast. It made me a bit sluggish going up those hills. 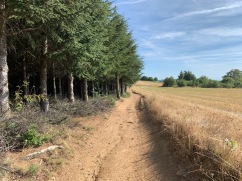 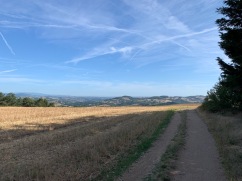 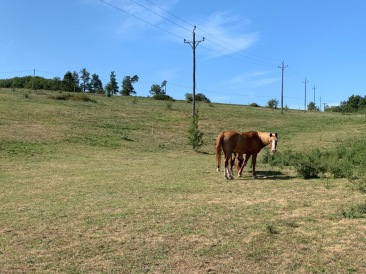 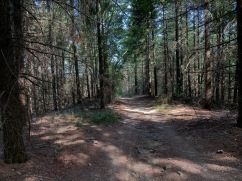 My knee was really no trouble at all. Maybe it was because even though it was a lot of up and down, it was more gradual than a big step. I’m not really sure why it was hurting so badly this morning and then was fine, but I’m not complaining!! I hope it continues to be ok, because those knee pains are horrific.

I had two options of how to go. At Col de Leyrisse, I could go north first and spend most of my time in the hills for about 17k, or I could go east first, spend 10k in the hills and then 9k walking flat along the river. It was a pretty easy choice. The shorter route! Plus the flat walking would probably be on roads anyway. 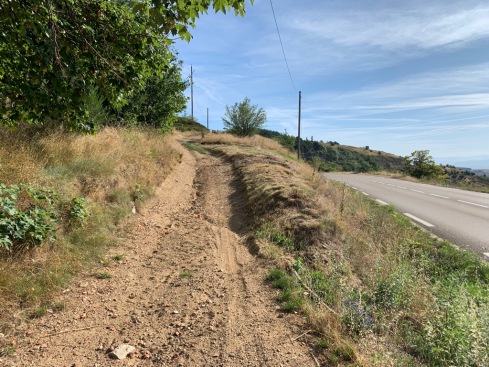 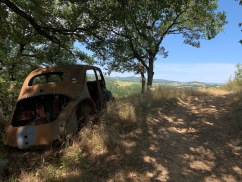 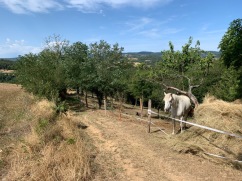 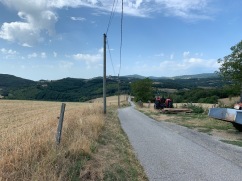 I would also be leaving the GR route for the first time, meaning, it’s not marked on my app! I love having that pink line on my app telling me which way I should go. I am leaving the pink line. I still have a map, but I won’t be able to tell if there’s a way I should go besides on roads. My book has directions, but it’s in French, and going in the other direction. Trying to follow it backwards could be very difficult. So it looks like road walking for the next while.

It was up and down again in the foothills of the Haute Loire. I got some really good views of the Rhône River valley, and I realized that I’d be leaving the Haute Loire and heading for the mountains on the other side, which look much taller. Pretty sure it’s the Alps already. Idk if there’s another name for this part, or if it’s just the French Alps. Exciting! 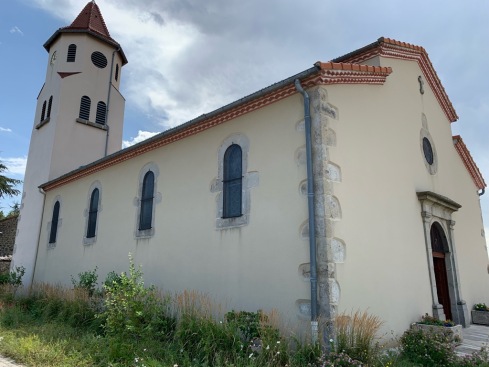 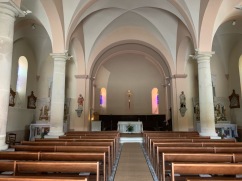 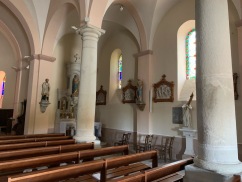 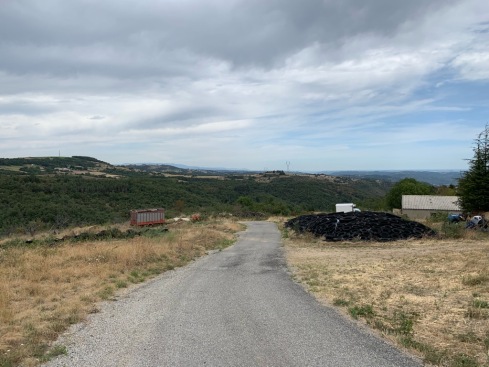 I was able to find a public restroom in  Saint-Romain-de-Lerps. Those are always exciting… There was no seat, or toilet paper, but there was a bar of soap! I used my tp stash. Huh, I just realized I haven’t used the bathroom at the place I’m staying yet. I wonder if that means I didn’t drink enough.

From here on it was mostly down, and mostly on roads, but I did make pretty good time. Those roads do hurt my feet though. They really make them tingle. 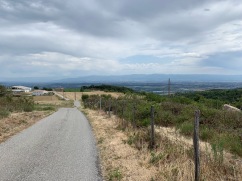 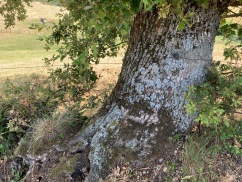 I found a great spot looking over where I was going. Le Roche de Glun is on an island in the middle of the Rhône River. The AirBnB is pretty close to the church on the north side. I really got lucky with the location. 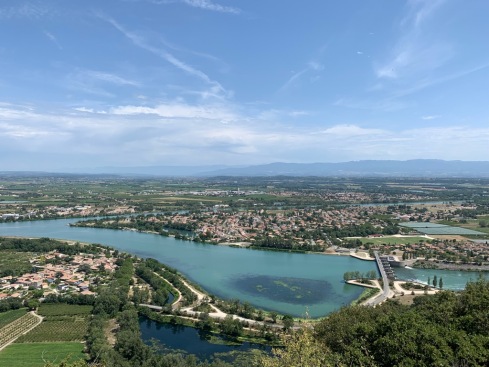 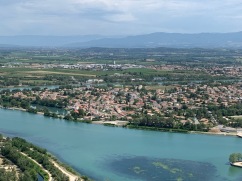 It wasn’t hard to find my way through town and across the bridges, and I made it shortly after 3 pm. It’s my first time in an AirBnB. The family is super nice. They have an adorable, blind, Jack Russell terrier who likes to sit in my room. I can’t remember his name, it’s something French I’m not familiar with. I asked if I could use the washing machine and they said yes! Best decision ever. Kinda gross, but I got in so late yesterday that I didn’t get to wash clothes at all. Ewww. It happens sometimes on the Camino. They also have WiFi, so I’ve been getting caught up on my blog. It was a bed only, so I thought I’d have to go somewhere else for dinner. I went to ask them if I needed to make a reservation at a restaurant close by, but they said I could eat with them for 15 E. Yes, please! She’s been cooking almost since I got here and it smells amazing. 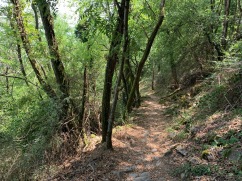 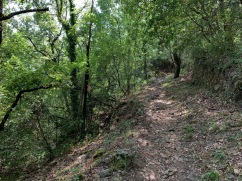 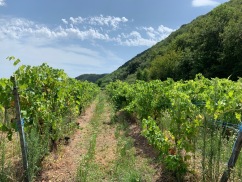 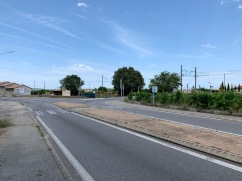 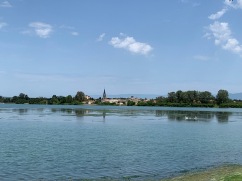 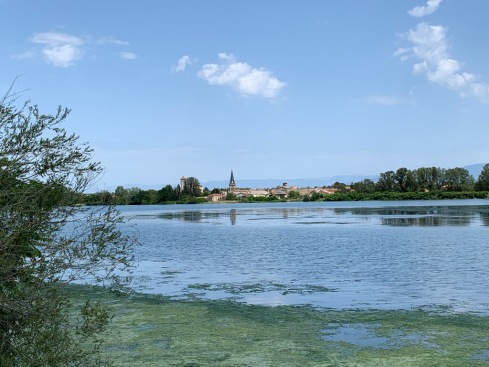 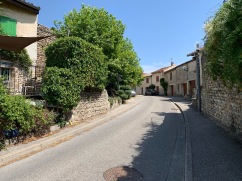 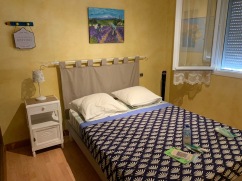 I haven’t had good luck calling places, so I was dreading making the call tonight for tomorrow. But a very nice man answered, and he speaks English just like the book says he does. They live off route, so I have two choices where he can pick me up. Depending on where, my next two days will be 21k and 26k, or 29k and 18k. He said I didn’t need to decide yet. Just call him tomorrow about noon and let him know. Yay! It’s a relief knowing I have a place.

I did something to my lower calf/ankle. I don’t know if it’s because I retied my shoe too tight, or something else. It almost feels like I bruised the tendons. Or kinda like shin splints, but right above my ankle. Hopefully that will be better tomorrow. It’s like a game of, “What body part will be hurting today!” (More than usual.) But still, so far, nothing that will keep me from going.

Ok, staying here has been one of the best decisions. They are very much just like Gîte owners. And holy cow can this lady cook. Best meal by far, and that’s saying a lot. Ridiculously good. The husband cooked the fish, and it was incredible too. He said they eat very well and have lots of parties. I believe it.

The first course was an amazing tomato and pepper salad with tiny little olives and herbs, and some egg things. I went for seconds and he just dumped the whole thing on my plate. I ate two  whole eggs and probably two tomatoes. Stinking delicious. The next course was some kind of courgette/zucchini thing, which was also delicious. Then the fish, which I think was the best fish I’ve ever eaten in my life. Then a cheese course, then an apricot tart that would blow your mind. I don’t even understand how there was so much flavor in it. Absolutely incredible and more than worth the 15 E for quantity and price. They like to feed pilgrims well. I meant to ask for their picture. Hopefully I can in the morning. 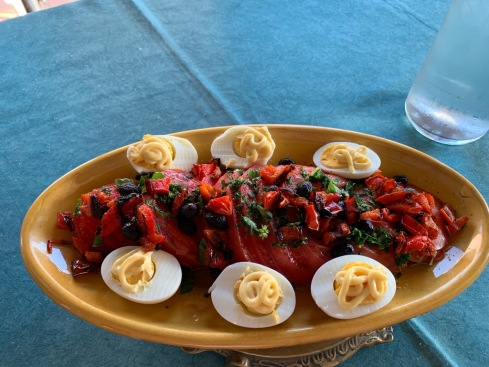 This is a lovely little piece of heaven. And I have clean clothes!