We had an adventure this morning. We planned to go to Chartres by train to see the cathedral. It’s a very famous cathedral, so I figured it would be worth the trip. According to something I had read, someone said that it was the end of the commuter line from Montparnasse station. So, I figured it would be just like buying a ticket for Versailles. However, it is not on the same system like Versailles is, it’s on the mainline system.

Heidi had been worried about us having enough time to make our train, but I assured her we’d be fine.

It was a little over an hour to Chartres, and luckily the station really is only a few blocks from the Cathedral. However, like every other thing we’ve gone to see, it was under renovation. Some pretty serious renovation, too. I’ve never seen another cathedral like it. The contrast between what has been finished and what hasn’t is literally night and day. The stone is so dark and dirty, and then in the places where they have cleaned and painted, it’s so bright. When they finish the whole cathedral is going to glow. It would be really interesting to see. But they are painting over the stone, not just cleaning it, so I’m not sure how I feel about that. They’re also painting fake mortar lines on the stones. 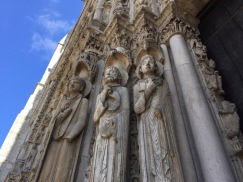 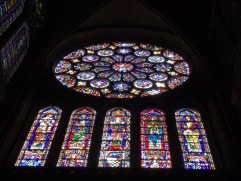 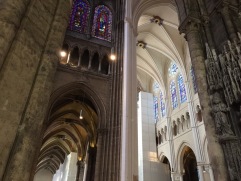 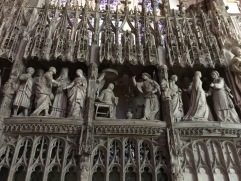 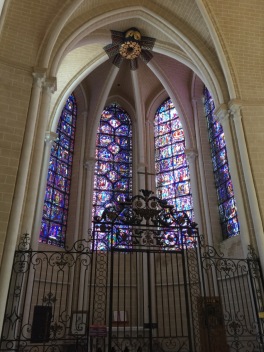 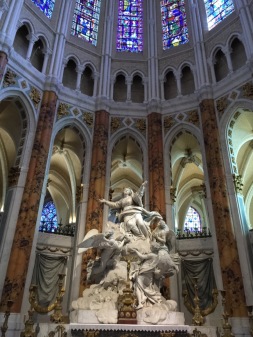 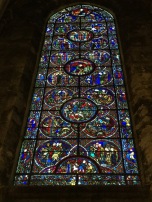 Anyway, the cathedral is HUGE and the windows are very pretty.

We walked around the outside, and checked in some shops. We had an hour before our train, but Heidi was worried we wouldn’t have time to eat and make it back, so she wanted to just grab something at the grocery store. Except the grocery store was closed during lunch. So we ended up at a cafe anyway. It was pretty awful. Heidi got her usual goat cheese toasts, but she said it was absolutely disgusting. I got some lasagna, which wasn’t terrible, and I thought the salad dressing was absolutely delicious, but the greens were completely unwashed and gritty. So lunch was pretty bad. 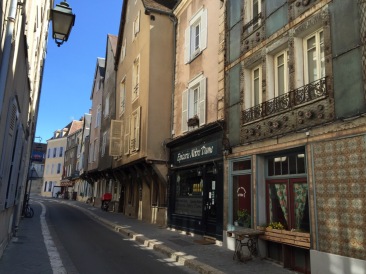 Heidi was able to buy some bread and cheese at the station to make some up for the bad food. She also took a nap on the train on the way back.

We got back to Paris about 3 pm. We went back to the hotel to freshen up and then headed out shopping. We walked down to the river again. The main thing we were shopping for was bags with zippers to use as carry ons for the plane, for all of our souvenirs. 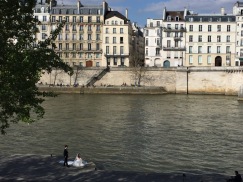 We took the metro back to the hotel and then looked for a place to eat dinner.

We ended up at Chez Justine’s, north of our hotel. Heidi got a burger, and I got the veal with some macaroni and cheese. 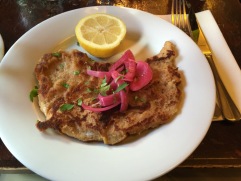 Tomorrow is our last day!