We got up early this morning and went looking for breakfast. We decided not to do the hotel buffet, as it didn’t look very impressive for the price. The breakfast we found turned out to not be much less, since the fresh squeezed orange juice alone was 4.50E. It was delicious, though.

After breakfast we headed on the Metro to Montmartre and Sacre Coeur. The area below Sacre Coeur is very touristy, so stopped in a few shops and found some fun souvenirs. We had just been talking the night before about how “La Vie en Rose” is one of my favorite songs, and we found some music boxes that play it! I also got some magnets and a print of the Arc de Triomphe.

Sacre Coeur is at the top of Montmartre, so you have to walk up a hill and lots of steps. On the way up, there was a group of guys from Senegal that we could tell wanted to “sell” us something. It was some pieces of string twisted into a bracelet. You tell them you don’t want it, but somehow they get it on your wrist, and then they demand money for it. Next time we will have to be more assertive and less polite.

It’s free to go in. It’s absolutely huge on the inside. It’s so big and open it’ shard to take pictures of it. If you want, there’s an optional 6E fee to walk 300 steps to the dome. Heidi didn’t want to, because she had twisted her knee a bit, but I decided I wouldn’t know if it was worth it or not unless I tried it. I’m still not sure if it was worth it or not. It was a super tiny spiral staircase, and thankfully, one directional. There’s barely enough room for one person. After climbing a bajillion steps up, you can walk around the outside of dome and take pictures. It did offer unique views of the city, and there was even a bride up there taking some pictures. Well, having some pictures taken of her. 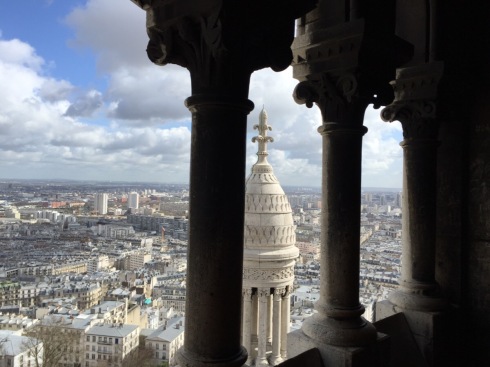 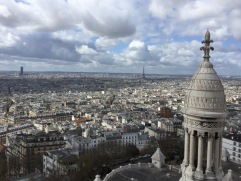 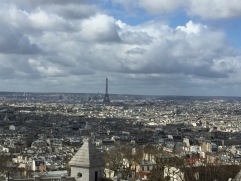 While she was waiting for me, Heidi sat on the steps and listened to some harp music.

We ate at a little cafe that caters to the tourists. I had a “Cesar” salad that was more like a chef’s salad, and Heidi had the goat cheese on toast and salad. We both had fruit crêpes for dessert. 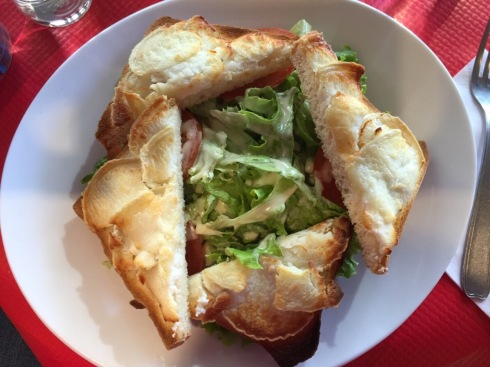 After that we felt prepared to take on the Louvre!

It’s day 3 and we’re starting to feel it. Heidi’s left knee was giving her trouble today, which she thinks might be because she was locking her knees on the metro to keep balance. I have a muscle on the left side of my right calf that pulls, and of course, my blister on the same foot. I think the muscle hurts because I’m walking funny because of the blister. And my feet hurt, of course.

Anyway, right when we were standing in line for the Louvre, it started raining! So that part of our plan worked, kind of. We were a few minutes off and did get a little wet. 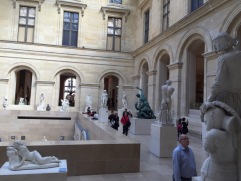 The Louvre has free lockers, which is super nice, so we didn’t have to carry anything around with us.

We wanted to go see the Renaissance paintings, but that whole wing was closed. So then we decided to go see the Vermeer on the floor above, but that wing was also closed. That was annoying. Welcome to the Louvre, where everything you want to see is under construction. Apparently they have closure information at the desk, but we didn’t check first.

We did, however, get to see Napoleon III’s private apartments, which were amazing.  Crazy opulence.  I just can’t even imagine what living like that would be like. 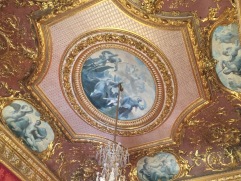 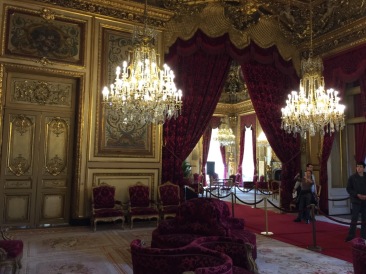 So then we decided to go see the big attraction in the other wing. The Mona Lisa, the Winged Victory, and the Venus de Milo. It did make me wonder, though, how certain things become more famous than other things. This wing was much, much more crowded than other one had been. 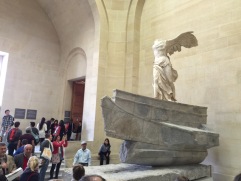 It was only 3 pm, but we were pretty much done. We decided to head back to the hotel and rest a bit. I worked on my blog while Heidi took a nap.

We asked at the desk for another dinner recommendation. He sent us to Le Chemise, which was about a 15 minute walk from the hotel. He also called and made a reservation for us. It’s definitely the nicest place we’ve eaten in so far. Still no menu! I don’t get it. Maybe dinner menu isn’t a big thing in Paris?

Heidi got a chicken and morel pasta, and it was to die for. Seriously the best thing ever. I was having some major food envy. I got a lamb shank and couscous with vegetables. I also got a cheese plate, and Heidi got the cactus flower cheesecake, which was also amazing. I warned her that the cheesecake was going to be very different, and it was. It’s very light and airy. 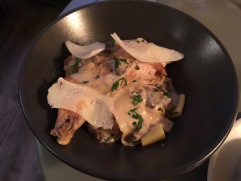 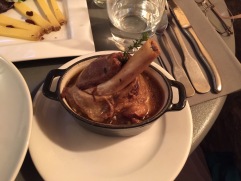 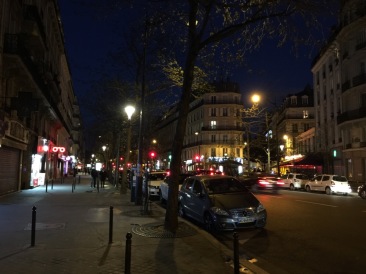 For both of us the dinner came to 66E! Whew. We’re going to be spending some money on food.

This was the first time we’ve really had to walk anywhere at night. It was nice.

This is a picture of the hotel elevator. It might be the smallest elevator I’ve ever been in. We can stand next to each other with our shoulders touching the walls and each other. It was absolutely hilarious when we tried to do it with our packs on. I mean, we did it, but we barely fit.