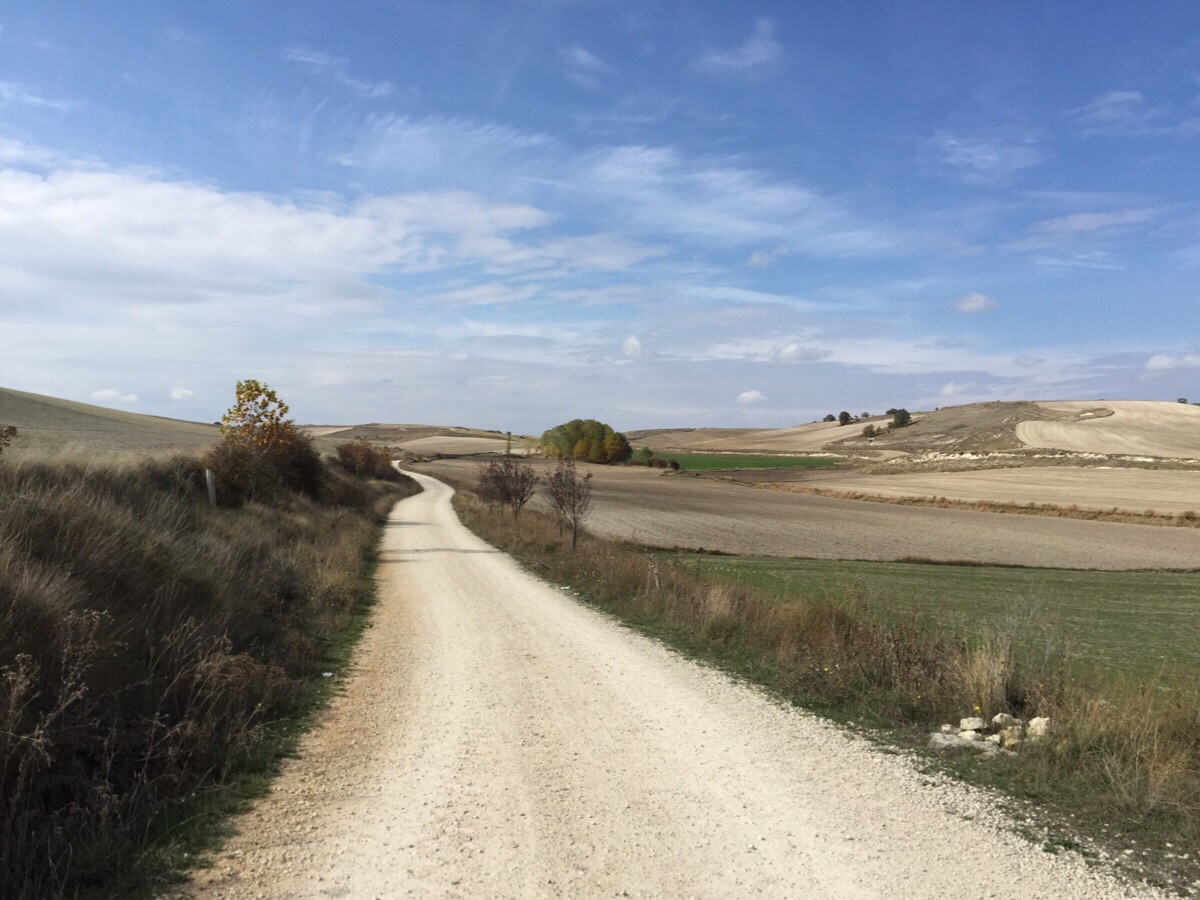 I got up and had breakfast. I made sure to eat a lot, but not so much it would be difficult to walk. There were 4 ladies from Vancouver there who were biking.

I got all packed up and on my way by 9:45. It was probably later than I should have left, but I wasn’t exactly eager to get going either. The problem with taking rest days at this point is they don’t feel like they do much good. I really need more than one day, but I can’t afford to do that.  It might help if I take a rest day in a place where there’s nothing to do.  I will just have to rest when it’s over.

I saw another stork nest on top of an arch thing. I walked through a park, and leaves were falling from the trees, and there was a nice layer of leaves on the ground to kick through. It felt very much like Autumn.

The walk out of Burgos was actually pretty nice, especially compared to the walk in. I looked in my MMDD to decide where to go, and it looked like the best option was Hontanas, which unfortunately was almost 32k.

There was some construction going on, so the camino had to take a bit of a detour.

A little after 1, I was passed by the 4 ladies on their bikes. They are not riding quickly, it just depends on the day how far they go. Shortly after they passed me, I think I officially entered the Meseta. So far I like it.

As I was starting to go a long hill, I saw a group of people having lunch. We started talking, and I ended up walking the next 12k with them in to Hontanas. Nat and his dad, Barry, from Canada. They are both highly entertaining. I was walking and talking with Nat at first, and he mentioned something about his dad being brain injured, but I thought it was a joke. Turns out his dad did have a traumatic brain injury. Whether or not it’s an effect of the injury, his dad talks a lot.

He had a fascinating story about how his however many great great grandfather was put into the foundling hospital/orphanage in London because his mother had been raped, and he went on to apprentice as a steel worker in Chelsea and ended up starting his own company that still exists today. He lived at the orphanage at the same time that Charles Dickens visited and he basically lived the same kind of life as Oliver Twist.

As we were walking along, it started to rain, and it got harder and harder. I had been unprepared for rain, so I did not get any pictures. I had been curious what walking in the rain in the cold wind would be like, and I found out.

We got into Hontanas, and I got my own room at the albergue for 25 E. Especially after being wet with the rain, I wanted some space.

There are tons of people at this albergue, and one of them is Claire! I was not expecting to see her today. I was thinking maybe I would catch her tomorrow, but not today. She said she had a very short day after leaving Burgos and then slept most of the day. Today she only walked about 20k.

I think I am more tired than I realized. I don’t think I will be up long past dinner.

I went to have dinner, but the dining room was very crowded. The biking ladies from Vancouver invited me to sit with them at their table! It was so nice. They had already finished their first course, but they waited for me. They were absolutely lovely and we had a fabulous dinner.