By bedtime there were 8 people in the room, but I think there was only one snorer. He didn’t keep me awake the whole night, but it was enough.

Brian got up sometime around 6, but I couldn’t imagine why, because it wasn’t going to be light for over two hours. It was also cold.

I was awake, but I didn’t want to get up too early because the sun comes up so late. We were supposed to be out by 8, and I was walking down the stairs as the bell was chiming. I ate a quick breakfast of the yogurt from last night and a little package of cake that Cappy gave me.

The five Parisians were standing outside talking to Brian. Turns out he just got up early and did some reading and other stuff. That doesn’t sound fun to do in the cold. I would want to either stay in bed or be walking.

I said goodbye to Brian and headed off after the French group. It was still pretty dark, but I figured I could just follow them.

The beginning part of the day was very nice, going through some trees again, although it was very dark in the woods. I finished off my package of cookies, but before I left I bought another one. I’m going to need cookies in my hotel room in Burgos!

As I caught up to the French group, Isabel said, in French, “Attention! The American wants to pass. The American is in a hurry to get there this morning.” We all laughed, but it was true. I chatted for a bit, said I did not sleep well, and learned the word for snoring.

I saw my first Spanish cows! And baby cows!

I walked out of the trees and came down the hill into my first little town. I was feeling pretty good after my breakfast, so I didn’t feel the need to stop.

After going through the town, or maybe it was two towns, I started going up another hill. It was another very cold and cloudy day, and it was so cloudy there was no sunrise to be seen at all. Not a hint of color, until 9:30. But! The clocks go back tonight, so it will be getting brighter earlier, which is very nice.

There was a large flock of sheep heading up the hill in front of me. I wasn’t sure if I would catch up to them or not, but I did. It was so fun to walk with the sheep, hearing the hundreds of bells clanging.

There was a large cross at the top of the hill.

As I continued walking, I saw someone leaning backwards over a bench with her arms hanging down toward the ground. It reminded me of something Claire would do. I got distracted by something, and when I looked back, the girl was walking toward me with her arms wide open. Could it actually be Claire? It was!

I was completely shocked because I wasn’t expecting it at all. I figured she was long gone. We had a wonderful reunion. Seeing Claire and knowing she was ok just brightened everything. It was so, so good to see her. Like me, she’d been having some ups and downs and adjusting to Spain. She had met two guys and had been walking with them for a few weeks. They were taking things slower, which is how I caught up to them.

Claire said, as she was lying on her back stretched over the bench, she saw my head come over the hill, and she thought, “could it be?” And then when my dress (the French all call it a dress) came into view she knew it was me. She said it was like watching the sun rise over the hill. Lol. It was so, so good to see her. It restored my spirits and lifted me.

She said that the camino feels like many lifetimes, and I feel the same way. The days all run together, but the days are so different, and the people weave in and out and come and go, it feels like many different lifetimes.

I walked with them for a bit into the next town, but then I went on ahead.

In the next town I stopped to get some lunch, and Remi was there. As we sat there eating, Claire and company caught back up with us and joined us. Gabrielle and David also came by, and Enrique, and the 5 Parisians. It was fun to see so many people I knew.

I headed off toward Burgos. I do hope that I will get to see Claire again and we will be able to walk together more.

The walk into Burgos was as torturous as I thought it would be. You walk around the end of the flightline of the airport, and it takes forever. Once you get past that, you arrive in something that looks like a city, and you see a sign that says, “Burgos 10k”. And then you walk 10k down a neverending sidewalk that really, really hurts your feet.

I was walking on one side of the road, and I caught up to Joe from Malta walking on the other side. He kept checking his guidebook, so I didn’t know if he thought he was lost or not. I crossed the street to walk with him.

We walked for a very long time, and I kept checking my google maps to see how far we still had to go. It seemed like we were never making any progress. Joe’s book has a map of the area right around the Cathedral, and every time we came to an intersection that had a fairly large cross street, he said, “this must be the intersection,” and I would say, “No, we’re still an hour away from the Cathedral,” and he would say, “I just don’t believe it.” At one point we passed a building that had a tank out front, and he was convinced it was the military museum on his map. He wanted to follow a street away from the arrows and go in the completely wrong direction. At this point my phone said we were still 14 minutes away from the Cathedral by car. I tried showing him the streets on his map compared to the streets on my phone and that we weren’t anywhere close. He held out his book and said, “show me where on this map we are,” and I pointed two feet to the side of his book and said, “we’re over here, we’re not on your map,” and he kept saying, “well I don’t believe it.” I said, “Well I’m going to follow the yellow arrows, which go in the opposite (maybe 90 degrees) from where you want to go.” His foot was really hurting him, so I really didn’t want him to go even farther away from his destination. At this point, and old Spanish man across the street whistled at us and waved us over, pointing in the direction of the yellow arrows. Joe speaks a little Spanish, so he asked where the Cathedral was, and pointed in the direction where he thought his map would take him. The old man said, “no, no,” and said it was a long way in the direction I had been saying we should go.

It didn’t really get any better at this point, though, because he man gave us very detailed instructions in speedy Spanish, which of course we didn’t understand, but I didn’t think it mattered because we could clearly see the yellow arrows. So we thanked him and started off, but then he whistled at us again and clearly wanted us to cross the street first and walk on the side away from the yellow arrows. So I pointed at the arrows and said, “amarillo,” but he kept insisting we go to the other side. So then he decided that we were too stupid, or something, so he escorted us for about 5 blocks on the wrong side of the street until we came to the place where the arrows cross over and joined up with us. We crossed through a little park, and came to an opening that showed a straight shot to the Cathedral. Then Joe turned to me and said, “I guess you were right.”

It was really nice of the old man to take his time to make sure we went the right way, but I honestly don’t know why he couldn’t just let us follow the arrows. It’s not like we started on the other side of the street, we were already on the side with the arrows. Anyway.

I am very grateful that I know how to read a map and that my brain understands spatial reasoning. I’m also glad that Joe did not decide to walk in the completely wrong direction.

I checked into my hotel. It took me a while to figure out how to turn the lights on. There’s a thing by the door that I have to put my key card in, and once it’s in, the lights work. I think it’s kinda cool, but it’s not something I had experienced before.

I relaxed for probably longer than I should have, and then headed off to go look at the cathedral. As I was walking down the camino street toward the cathedral, I saw a table of a bunch of people I knew! Alison said the Cathedral was probably closed, but I went to look and take some pictures anyway. It did close at 6:30, but I am spending a whole other day here, so I can go tomorrow.

As I was out wandering around, I heard someone call my name in the square, and it was the 5 Parisians!  They are ending their walk here, and next year hope to finish the whole thing to Finisterre.

I went back and had dinner with everyone. We went to a rather fancy and pricey restaurant (for Spain). It was 16.50 for the menu, and that was the special pilgrim price. I got a soup with bread, egg, chorizo, and morcilla. The picture of just the morcilla (blood sausage) is Remi’s. Then I had the sea bass and Santiago almond cake for dessert. It was good, but it was not nearly enough food. I needed some carbs or starch with it.

I was trying to explain the whole “man bun” thing to Remi, and that a lot of girls in the US would find him very attractive. 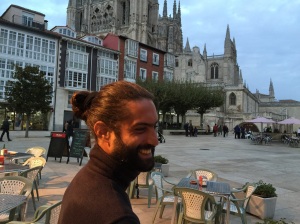 By the time I started walking back to my hotel it was after 9, and the city had come alive. I walked down a tapas bar street, and it was literally shoulder to shoulder. The other streets were very crowded as well. There were thousands of people out and about for dinner. It was pretty crazy.