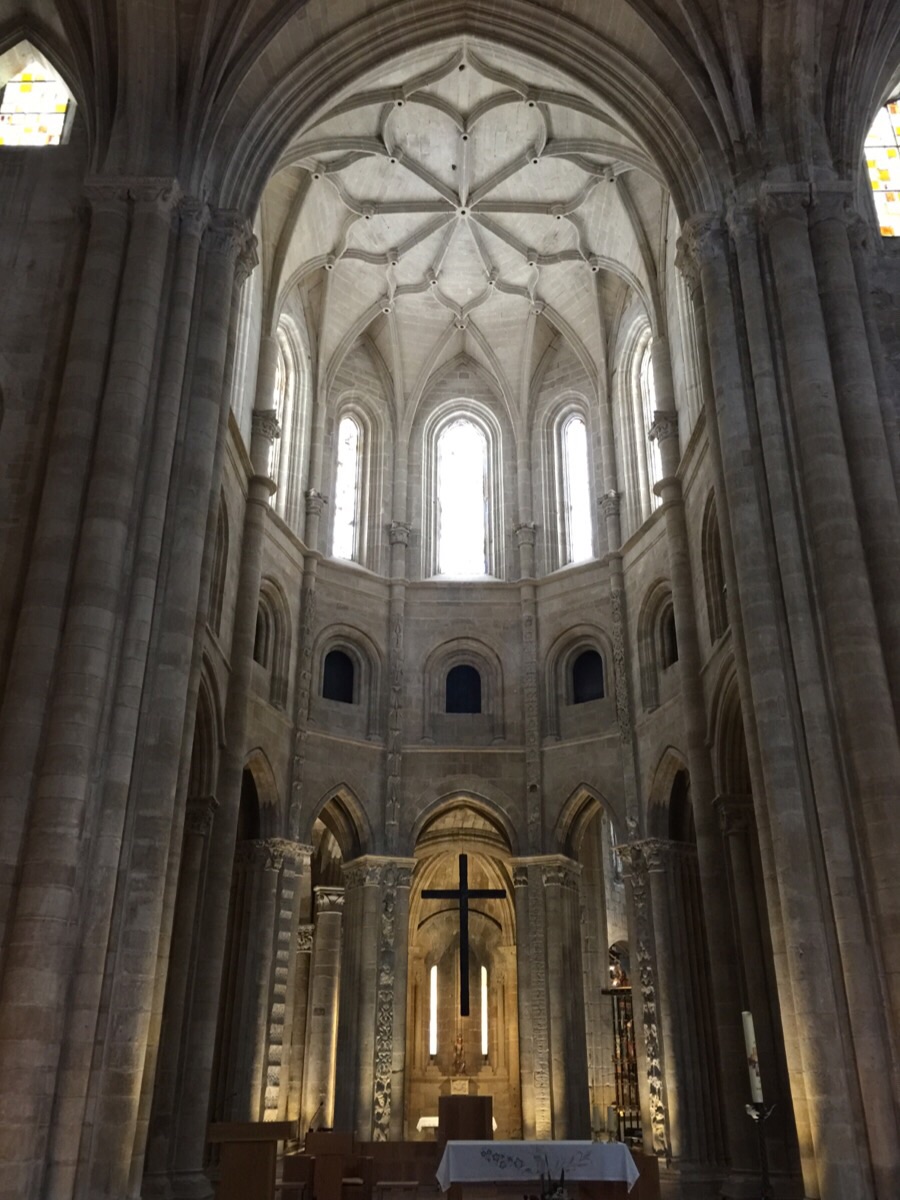 Considering that I slept in a room full of 8 people, I did very well. As far as I could tell, there was only one snorer, and he snored at a low enough frequency that the earplugs actually mostly worked. I only heard him a few times, and I was able to go back to sleep.

I wasn’t sure what time I would get up, since today was going to be fairly short, but I decided if I left earlier, then I would get to Santo Domingo even earlier!

Amanda got up at 7 and she was gone by the time I got out of the bathroom.

My pack is an Osprey Exos, and while it’s really comfortable, it’s an ultralight pack, so it doesn’t have a lot of bells and whistles. It only has one main compartment and there is no separate zippered part for a sleeping bag. The annoying thing is that I have to repack my bag every morning, because the sleeping bag goes at the bottom. If I ever do this again, I will either go in warmer weather where I don’t need a sleeping bag, or have a bag with a separate compartment. That way I can pack everything the night before and it would be easier to leave.

I left right before 8, but it was still so dark out I was worried about missing signs. It gets light so late now. It was also very cloudy, which made it darker.

Distances are a bit harder to wrap my brain around here, because it’s so wide open. There are less landmarks and the landscape changes less, but you still go the same distance, if that makes sense. It’s just different.

Because it’s so much later in the season in Spain, most of the fields are harvested and plowed already. I wonder what they grow here.

As I walk, because I’m in Spain, my mind tends to wander toward things associated with Spain in some way. Today I was thinking about the Smothers Brothers. We had a recording of them with Evening at Pops, and they had a Spanish song that they did that devolved into Tom goofing off and going into a wild tangent and the whole “take it, naked bacon,” thing. I was running through the whole skit, as much as I could remember. The joke at the end was, Dick said, “These people didn’t come here to listen to us argue,” and Tom says, “some of them did.”

I left this morning without eating, so I was quite hungry. The first town I came to was Azofra. I stopped in a bar for some tortilla and orange juice, and big old pain au chocolat, which is more like a donut here. And I forgot to use the restroom. That’s a pilgrim rule, always use the restroom when you can! Especially in Spain. There aren’t a lot of bushes to hide behind in Spain. While I was sitting in the bar, they were playing La Vie en Rose again. I love that song. I know it’s a classic Paris song, but it’s just fitting for Europe in general. I will have to get it when I get home. Actually, I’m going to listen to the recording I took in Pamplona. Too bad I couldn’t get the whole thing.

It was cloudy enough that I was wondering if it would rain, and it kind of did. It spit for a while. Not enough to make me put my gear on, but a lot of people put their pack covers on.

Walking up a hill I met Susan from Alaska. She has done the camino 10 times, and she’s 72, but she’s interested in doing Le Puy. She’s been taking French, so I told her to go for it!

We passed through a golf resort ghost town. They built a golf course in the middle of nowhwere, then decided to build a bunch of condos around, and there is no one there. All of the shades are drawn in the windows and there are tons of for sale signs everywhere. Susan was telling me about it, but it’s shocking how large it is. So many buildings and they’re all empty. Someone thought it was a good idea at the time.

On the way down the hill into Santo Domingo de la Calzada, I met Len and Monique from Nova Scotia. They were going on ahead, but taking shorter days, so I will probably see them again.

I got into town shortly before 1. I picked a Pension in Miam Miam Dodo and went to the place. Pensions seem to be a little different. There is no one there manning it, but if you call they can get there very quickly. She didn’t speak English, but she did speak French, so she came and we did everything in French. It was kind of awesome! It was either 20 E for a room with a shared bathroom, or 30 E for a room with my own bathroom. I got my own bathroom.

I took a very long shower, and shaved my legs for the second time this trip! I decided I’d better get out and see the town early, so I could get to resting. Even though I walked 20k today, I got in so early it’s almost like a half rest day.

I went to the Cathedral, and I had to pay 3 E to get in. When I had dinner with Mickey in Los Arcos, he told me about the Cathedral and the chickens. The story he told is slightly different from the one in the brochure.

This is how he told it, more or less:

“There was a family of pilgrims traveling to Santiago. They stopped at an inn in Santo Domingo, and the inn keeper fell in love with the son. He didn’t reciprocate, so out of spite, the inn keeper put a silver goblet into his bag and accused him of stealing. The punishment for stealing was hanging, so they hung the son. The parents continued on to Santiago. On their way back, they stopped at the house of the Mayor and told him their son was innocent. The Mayor was eating dinner at the time, and he said, if your son is innocent, then these two chickens on my plate will grow feathers and fly away. And they did! So they all ran to the gallows and the son was still hanging there, but he was alive! Saint James had held him up the whole time so he wouldn’t die.”

Here’s what the brochure says. 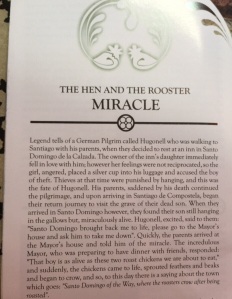 So that’s the legend and the miracle of the chickens. There is a souvenier shop that is nothing but chickens. Chickens everywhere.

Inside the Cathedral there are two live chickens in a very ornate chicken cage.

It also has the Crypt of Santo Domingo. It seems like they’re turning the Cathedral into a museum of sorts.

I was absolutely in love with the architecture of the Cathedral. I think it’s one of the most beautiful I’ve seen. Similar to Conques.

After that it was 3 and I decided I should find some food. This was the first time I was really unimpressed with the food. Well, I’ve been unimpressed before, but I had a hard time liking this. Maybe it’s because I ate earlier and so wasn’t as hungry? It seems like the restaurants serve a lot of frozen food. It’s hard to find things are freshly prepared.

The first course was a seafood soup that was actually quite good, but super oily. It even had a langosteen (sp?), but it had been obviously frozen. The second course was beef stew, and again, super oily, and way too salty. It wasn’t really even salty, but had that prepared food sodium taste to it. It was hard to eat all of it. And maybe it was all in my head, but I did hear the distinct ding of the microwave when she was “cooking”. Dessert was a drumstick! It was awesome. I ate it on my way back to the hotel.

Now I have to decide if I’m going to eat again after 7 or if I’ll just go to bed early.

I worked on my blog and got a pizza.  Unfortunately the wifi stopped working, so I wasn’t able to do as much as I would have liked.