Urusula is a retired German woman doing the camino. She was also my roommate last night. She is also a very accomplished snorer. She warned me ahead of time, but snoring truly is awful. I have been sleeping so badly anyway, so the snoring really did not help. It would be really nice if I could go home and sleep for a few days and then come back.

Francois asked at breakfast if I wanted him to wait for me, but I told him I had to walk slower today. My gîte didn’t open until 3, and I only had 28k to go. If I walked with Francois I would get there far too early.

I also had something happen last night that I don’t want to get into, but it made me pretty depressed. It brought back all of my pre-camino feelings and insecurities, and made me feel like nothing is going to be different when I go home, and I do not want to go back to the way things were.

The good news is that breakfast had nutella. Nutella makes everything better, right? I had 4 pieces of bread with nutella and some hot chocolate. Yummy.

It was gray and rainy, so the morning fit my mood perfectly. I had a lot of time to reflect. I know I do not want to go back. At this point, I still don’t know what will be different, but at least I know I need to make a change.

I came upon a farm, and it smelled. It was a new smell, though, and I couldn’t put my finger on it, but that’s because I’ve never smelled a duck farm before. 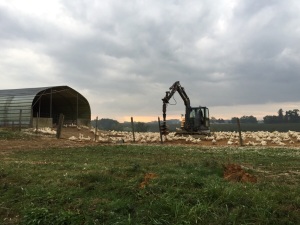 My magic raincoat was doing it’s job. When I wear it, it doesn’t rain, but as soon as I take it off it starts raining. This cycle repeated itself 3 times throughout the morning. Luckily it never rained very hard and it stopped raining before noon.

I passed some kind of aquaculture farm and found a crayfish trying to cross the road. As soon as he saw me he threw up his claws to make himself look as menacing as possible. I couldn’t help but think, “protean display!” It works. Lots of animals use it. He was adorable.

Today was walking through mostly corn fields. I felt right at home.

I also crossed the Greenwich Meridian today! I was confused at first, because I didn’t know if I was changing time zones, but I’m not. All of France and Spain are in the European Central timezone.

I got into Nogaro at lunchtime, so I decided to get some food. I figured food would help my mood. I still had 9k to go, though, and I didn’t particularly want to spend an hour on lunch. I passed a place called “My Asian Box,” and figured I’d give it a try. It was actually pretty good, and cheap, and fast.

On my way out of town I saw someone up ahead. It took a while to catch up, but I thought it might be Claire, and it was! Turns out we were going to the same place. It also turns out that Claire was exactly what I needed to lighten my mood. We still had 9k to go, so it was nice to have someone to talk to as a distraction.
Claire started walking from Le Puy on September 8th, so with my 4 rest days we’ve been walking about the same. She took her tent and sleeping pad and is mostly cooking her food since she’s a vegetarian, and just started walking to try it out and see how it went. She was only planning on walking for 4 or 5 days, but here she is almost a month later. She still has no plans on how far she’ll go or when she’ll stop.

As we were walking, I saw someone sitting down up ahead, and I thought it looked like Dieter! Sure enough, that’s who it was. I haven’t seen him since… idk, before Conques. I asked him if he’s seen Anick, and he said he saw her a few days ago in Condom, but he spent an extra day there. I might only be a day behind her! But then I’m spending another day in the next town, so I still might not catch up with her. We’ll see.

We got to our gîte, which is a little building connected to a church in the middle of the woods. It’s fabulous. Like a little oasis of warmth and clean and hopefully yummy food. Claire and I were the only ones, until Dieter showed up, but he’s just going to be tent camping. I really hope I can sleep well tonight. Sleep is so important on the Camino. It can be difficult with good sleep, but with bad sleep, it makes every little thing worse.

Dinner was wonderful. Of the 3 guests I was the only demi-pension. Dieter and Claire mostly cook for themselves. The host invited them to eat their dinners with us, so it was quite nice. Marinette is the host. She is from… Hmm… I was going to say she’s Dutch, but maybe it’s Denmark. No, she’s Belgian! Yes, Belgian, but she learned English from real English people, so her accent is more British. She is a delight and a hoot. She ended up owning a gîte because she walked the camino, then decided she needed to make some changes in her life, and here she is! I would love to run a gîte and cook for people. I think that would be so fun. But I would have to learn French, and figure out how to live in France, so maybe I would have to marry a Frenchman, and have some cows so I can make my own cheese. And make croissants every day. Yes.

The first course was a thin lentil soup that wasn’t really anything special. However, the second course was divine! It was some kind of zucchini and tomato and onion and cheese casserole with thyme and nutmeg and cream and some thin raviolis, and oh my goodness. Deliciousness. Apparently I was making all of the right appreciative noises, because she kept giving me more. At the end of the dinner she said I needed to stay to show the other pilgrims how to show appreciation, not that they didn’t, but she said I was quite fun to feed.

Claire had been collecting horse chestnuts all day and cooked up a bunch of them to share. I had no idea you could eat horse chestnuts. Next fall I’m going to go around collecting them, or maybe I’ll even get some trees eventually. They are delicious!

Michel was at the gîte acting as a hospitalero. I don’t know how to spell that. He takes a couple of weeks here and there to go different places and host. He has walked the camino several times, and in 2010 he wrote a book about it. It’s in French, though.

It was just a lovely, wonderful night, and I never would have guessed from the way the day started that it could have ended so well.