Last night was interesting. I made the mistake of leaving my window open during dinner, and it got way too cold. So I jumped in bed and got all cozy under the myriad of blankets, and I fell asleep very quickly. I woke up about an hour later in a cold sweat. I had completely drenched my clothes and the bed. I was grateful I was in a hotel and had my own room. I took a shower, changed and washed my clothes, and slept on the other side of the bed. I have a tricky time regulating my body temperature. I always sleep hot. Even in the winter I usually only sleep with a sheet. I hope I don’t regret my decision to bring a sleeping bag only, and not a sleeping sheet. At the last minute, I wanted to leave the bag home, to save some space and weight, but I decided to leave the sheet instead. We’ll see how it goes.

I woke up sometime after 7, and went down for breakfast around 8. I have to say, the breakfast was the best yet, which I wasn’t expecting after the dinner last night. Well, it was pretty on par with the breakfast at L’Escole, but this time I got hot chocolate! They serve it in this big bowl. I think they do that with coffee and tea, too. Maybe just the tea. I don’t know. 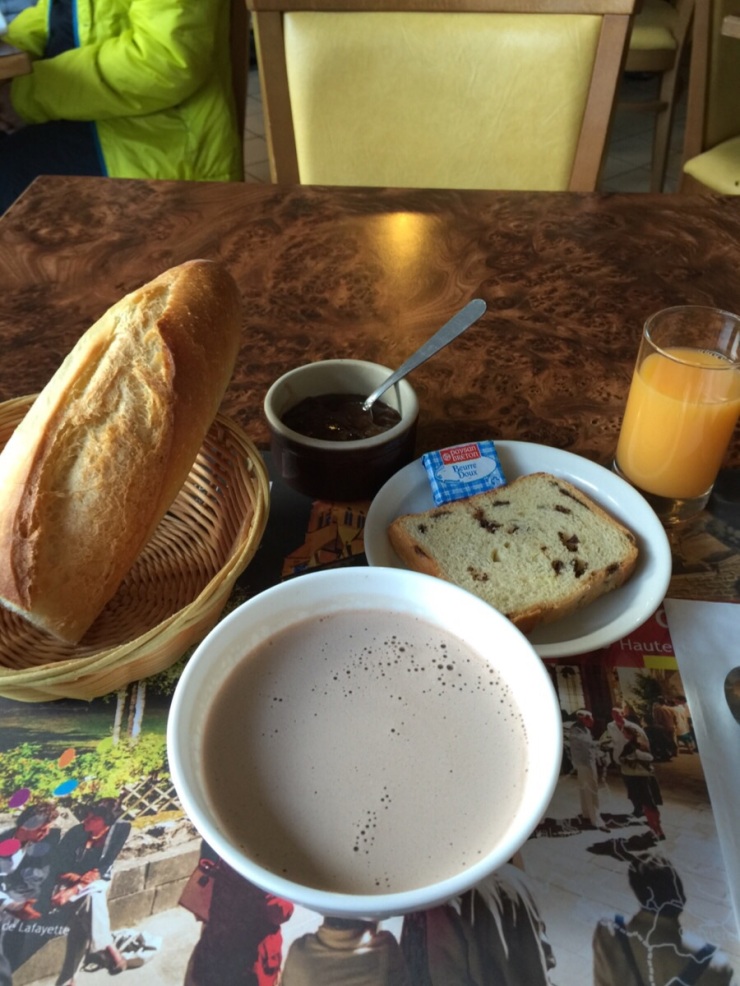 Most everyone else left town before 9. It was a short day, though, so I wasn’t worried about leaving too late. Only 12k, but another steep climb up over the mountain. It takes me about an hour to get everything together in the mornings. Everything has it’s own baggie, and somehow that seems to complicate things.

On the way out of town I stopped at the boulangerie and bought a quiche lorraine for 2 E. I thought it would make a delicious lunch, and I was right.

I met Elizabeth and Michel and we also met Pru(e)?, an Australian pilgrim from Melbourne going to Conques. She already did St. Jean Pied de Port to Santiago with her son a few years ago. Elizabeth was walking on two big blisters on each of her feet. There is no pharmacia in town. The nearest one is in Saugues, which is where everyone was walking today. Most people choose to take the first 3 days slowly, partly because you’re just starting out and your body hasn’t quite gotten used to it yet, and partly because of all of the steep ups and downs. After Saugues, it gets flatter. More rolling hills instead of steep climbs. Flatter terrain = longer distances. I still need to look and see where I’m going next, but from this point on, there’s no real set stages. I won’t be running into the exact same people every day. Some people I may not see again at all. But then I’ll be meeting new people that I will soon become old friends. That’s how the Camino works. 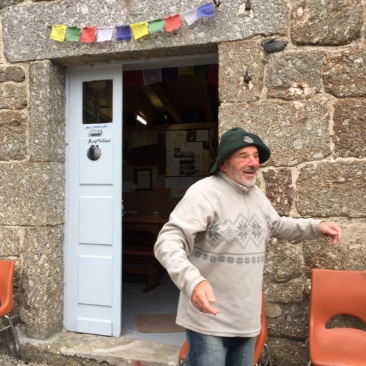 Robert the pilgrim from yesterday

Michel pointing at himself 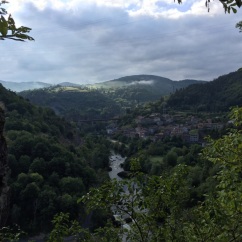 Pru and I walked for a while and chatted about life. She is turning 70 this year, has rhumatoid arthritis, and is just grateful to be able to do something like this. The climb out of Monistrol was brutal, yet beautiful. 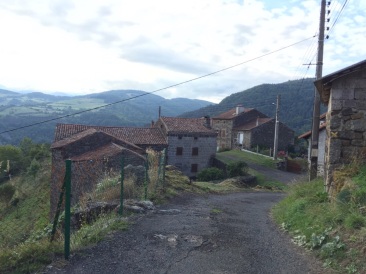 Some german bikers passed us. You can also bike the camino, but the minimum distance for a compostela is 200km instead of 100km. 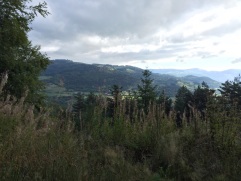 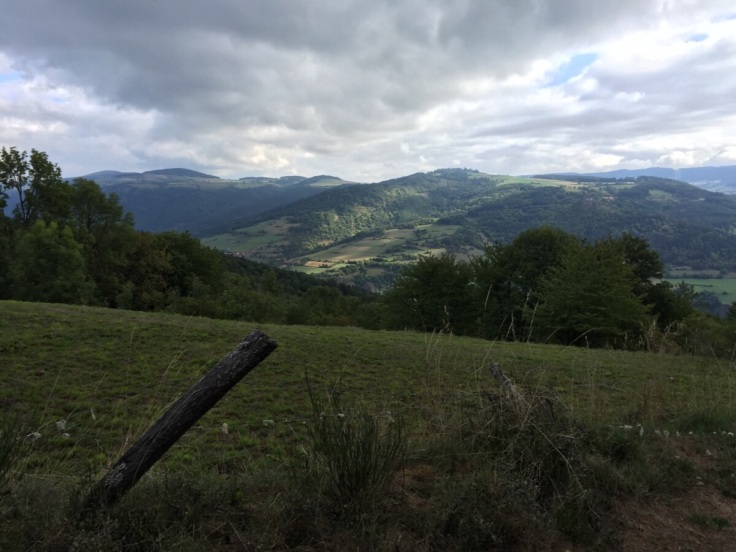 I left Pru while she took a break, and I continued on. 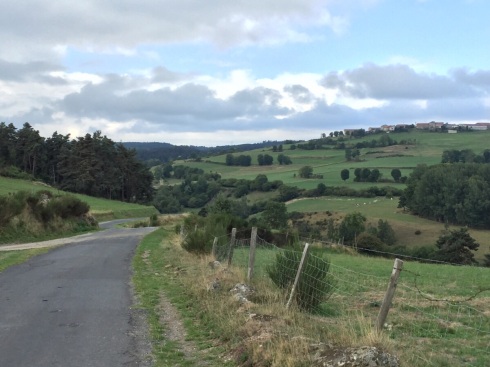 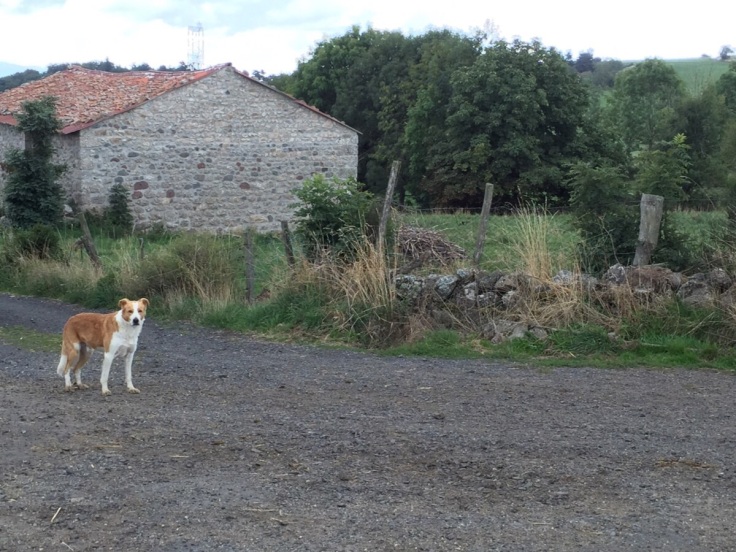 I caught up with the 4 french ladies I’d walked with a bit the day before. I hurried up and lengthened my hiking poles. Yesterday, one of them told me I had my poles too short, so I lengthened them and thanked her. I guess it depends on how you use the poles. Shorter to go uphill and longer to go down. When you’re walking straight, the pole is supposed to be a natural extension of your arm. If you can’t extend your arm all the way, then your poles are too long. I still don’t know if I like them. The poles, not the French ladies. But they still argued about the way to go, and commented about food and signs. 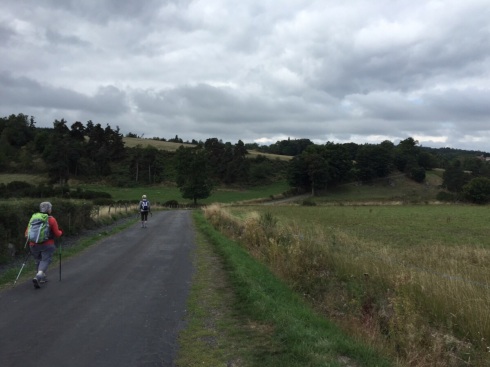 I left them in a village and continued on, thinking about my quiche and lunch. I came across Etienne’s group having a little picnic in a field. They were just finishing up their lunch, but decided to lie down for a while. I ate my quiche, and one of my nectarines and we waved and hollered as fellow pilgrims passed.

If you look closely you can see them waving

After eating, I caught up with Elizabeth and we walked together for a while. She is Belgian, but speaks very good English. She has a 14 year old and a 10 year old, and left them with her husband to hike by herself. In Belgium they have a thing where you can take 3 months time off work for each kid until they reach 18. It’s Parental leave. She is currently taking 2 months all at once to take a break from her job. She works in a free medical clinic that deals with a lot of refugees. She does the social work aspect, trying to find different services and medical care that they need. It sounds like a terribly emotionally draining job. She does get to help some people, but most of them they just can’t do anything for. 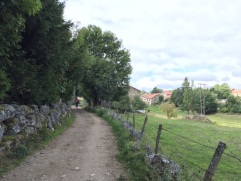 I think I’ve mentioned this before, but even though the trail is well marked, you have to be paying attention to see it. If you’re with someone and talking, it’s easy to miss stuff. We kept walking down a road, and then we realized that we hadn’t seen a sign in a while, and we were coming up to a main road. We had totally missed where we were supposed to go, and lengthened our trip just a bit. More unnecessary walking! Where we came out, though, was near a statue standing over the city, so we got to see that, because we did it on purpose, yeah.

She stopped for lunch, and I headed into town. It was only 1 pm and I couldn’t check into my hotel until 4 pm. I had to wander around town for 3 hours, and it was pretty cold. I went up near the church, and found a World War I memorial for the town.

After taking a picture, a little old woman waved me into a shop. She didn’t speak any English, but we managed to communicate fairly well, and I thought I understood most of what she said. She gave me a stamp and in return I used a sharpie to put a mark on her glob indicating my home town. I was the only dot in Ohio. 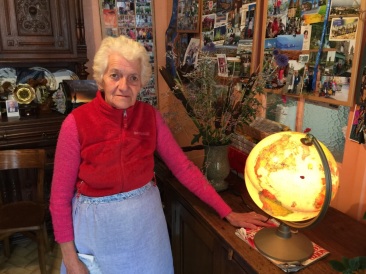 The door to the church was closed, but she said it was open and I could go in. 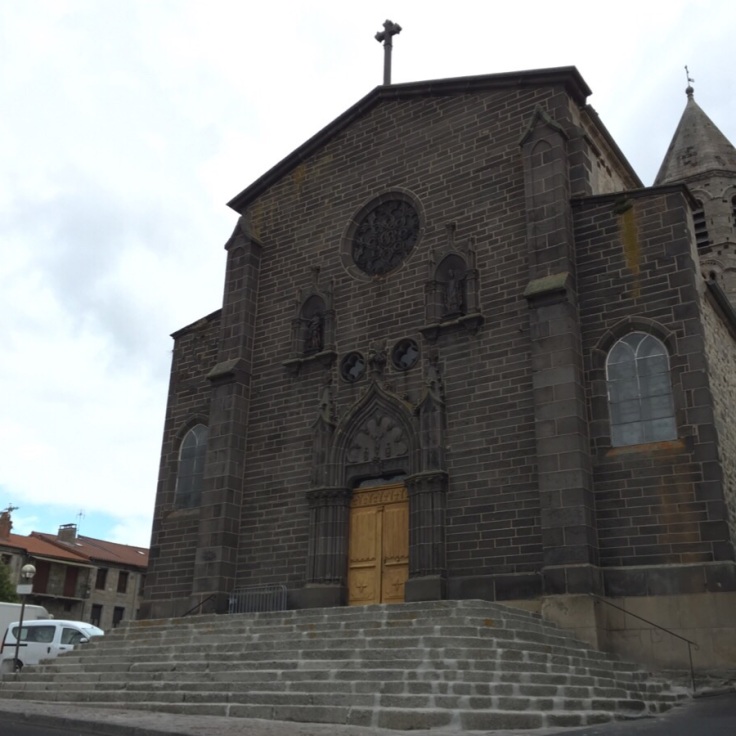 I headed to the center of town and ran into lots of people. I also met my first American! Megan from Portland. She’s walking to FIgeac. 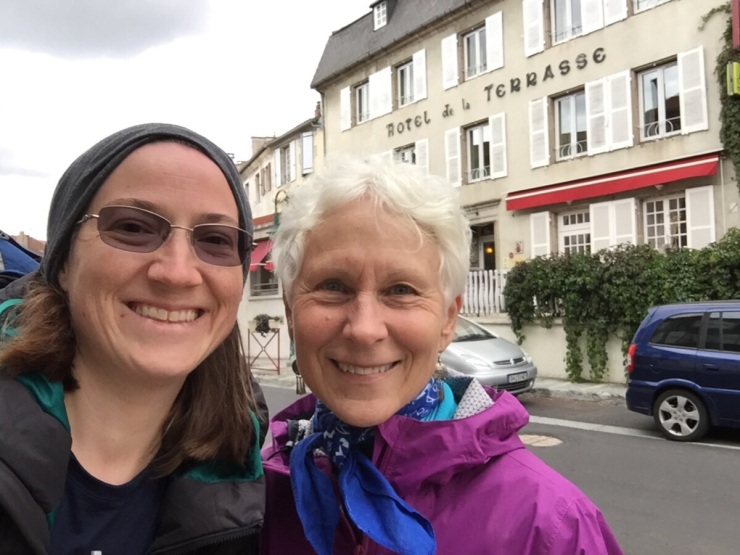 We also saw the couple walking with a Bernese Mountain Dog. They have a sweet set up, though. They walk to wherever they’re stopping, then the husband takes the bus back to where they stayed the night before and picks up their camper, and drives it to where they stopped. So they sleep very well every night and their dog is also more comfortable. How wonderful! 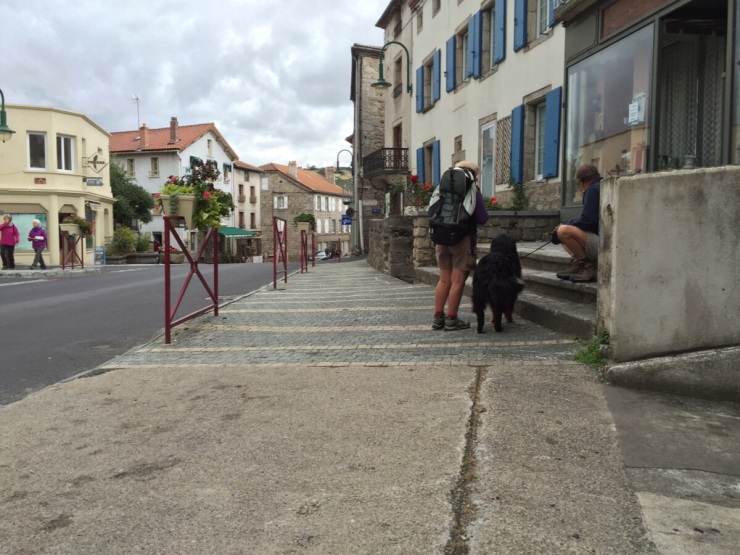 Sauges is the biggest city since Le Puy, but it’s still not very big. I did lots of unnecessary walking. Except, maybe not really unnecessary, because it was cold and I had to stay warm. I ended up back in the church with Veronique and someone was practicing the organ. That was cool. 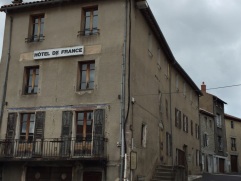 I thought this place looked uninviting 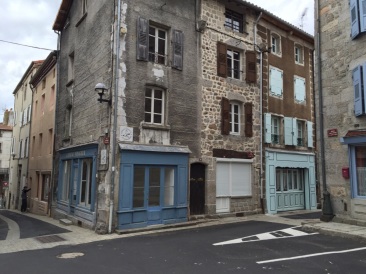 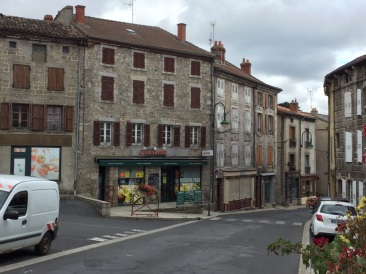 I got to my hotel shortly after 4. It doesn’t look promising, does it? 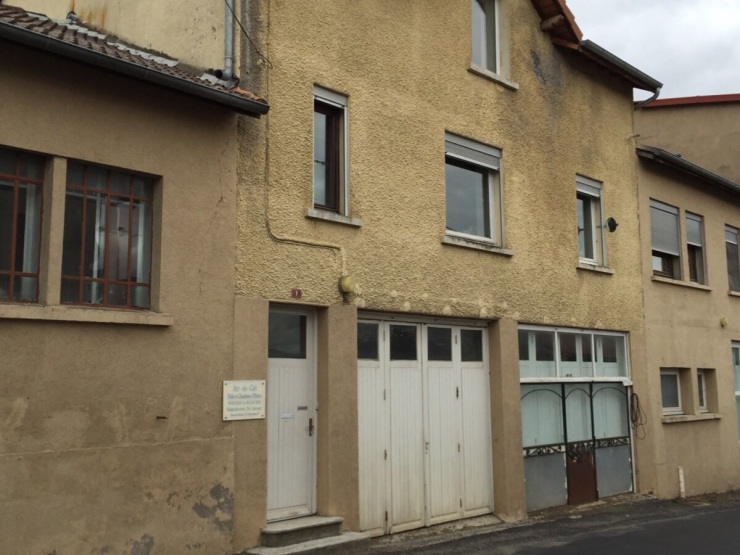 In the book it says they speak English, but it’s definitely the hardest time I’ve had communicating so far. It’s not a real hotel, though. The bathroom and shower aren’t in the room. They do have a washing machine, so I got to give my clothes a nice wash. I will try to do that once a week or so, if I can.

Dinner is in another hour, but it will probably take that long to get my pictures resized and uploaded.

I’m looking forward to tomorrow. Today really was too short, but the next place to stop is another 10k, and I don’t know if I would have been ready for that.

That was an interesting dinner! This is an odd place to begin with. From the outside it’s kind of scary looking, but it’s very modern inside. But I wouldn’t call it a proper chambre d’hotes, because of the set up. It’s too communal. I think the host and her mother live here, but it’s not separate, which is the odd part. It’s like, come live in or house and join us for dinner.

The host’s English really isn’t that good. It made for some amusing conversations. She asked where I was from, and I said the United States, and she said last week she had two people, “A man from Colorado, and your wife.” Then later she said, out of the blue, “My boyfriend is sleeping in your bed tonight.” I was a bit startled. She just looked at me and nodded. “He was dancing, so very tired and sleeping.” I was quite relieved. So I pointed at the empty place at the table, and yes, that was supposed to be his. Thankfully he was not really sleeping in my bed.

Dinner was much improved over last night. I must say I got a much better deal for my money than spaghetti. With a salad, it would have been perfect.

Paella? I don’t know how to spell it, but I’m not going to take the time to look it up. I’ve never had it before, but with the lemon and some hot sauce, it was quite delicious. It would have been a tad under-seasoned else.

Then the second course was cheese. The small one was my favorite. The big one, she was trying to tell me about the rind on the cheese, and how it’s made out of arachnids, spiders, and if you look closely enough you can see them, but you eat them anyway… something like that. I thought the small one was very good.

The desert course was a day old cheese product. Very soft new, unpressed cheese, with some cherries on top. 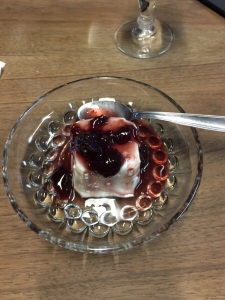 It was all good, but I’m still hungry. But I’m more tired than hungry. I think tomorrow will be a big day.