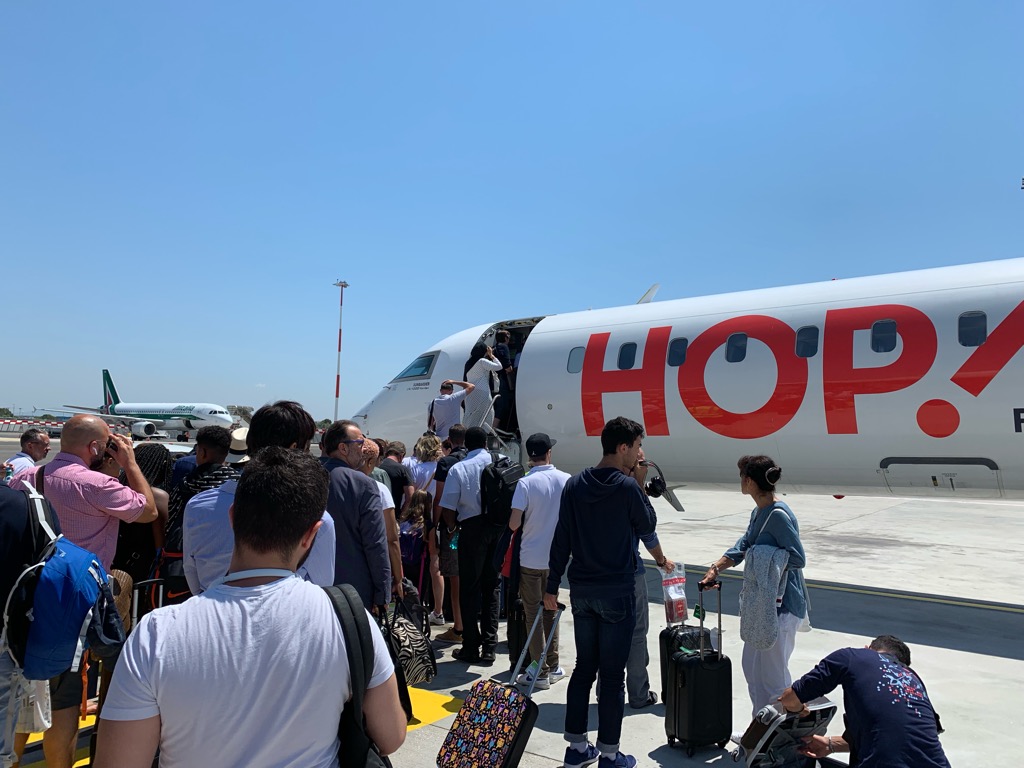 It has begun! It’s strange that it’s here. This whole year has felt strange, but as far as I know, I think I prepared well and didn’t forget anything!

I dropped Maddie off at Jenny’s last night, and Joel gave me a blessing. I really miss being able to get blessings from my dad. I know that things will be ok. That doesn’t mean things will go smoothly, but they will be ok. 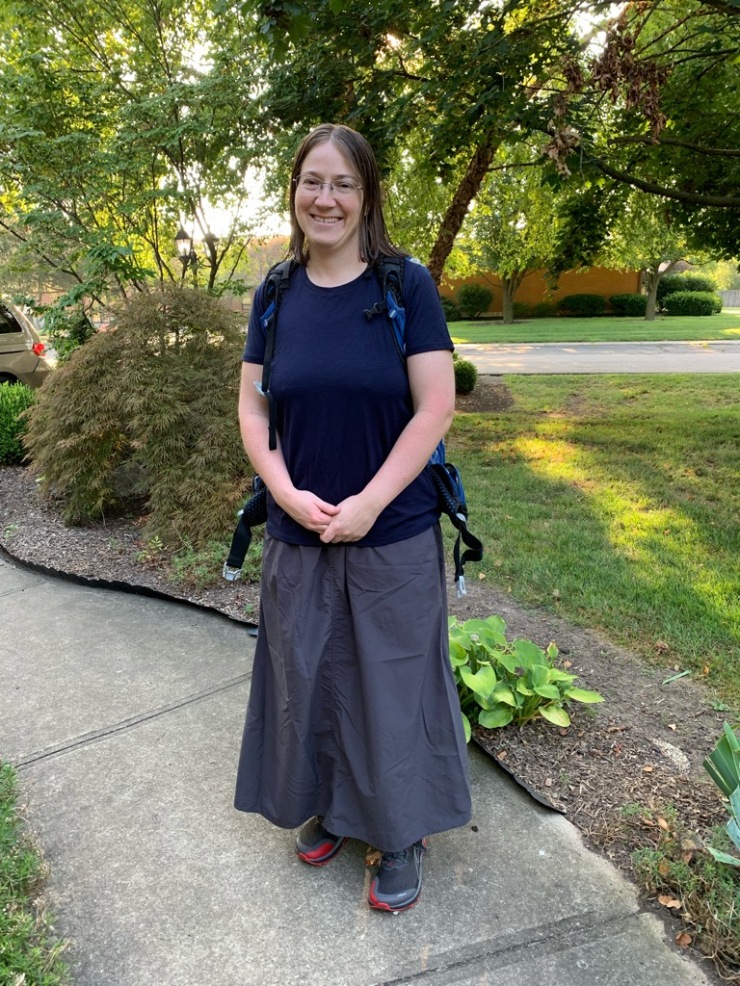 I had my first bump right after I got to the airport. I got to the gate and had a message that my flight from Rome to Lyon tomorrow had been cancelled! Apparently there’s a ground strike at an airport in Spain where this airline is based. They graciously put me on a different flight leaving on Sunday, which is completely unacceptable. I have the next 5 days booked and I can’t change everything! I was able to find another flight on another airline for 5x the cost of my first ticket. But it sounds like the travel insurance will cover $200 for travel delay and I should get a refund from my original ticket, so really I should only be put back $60. Still, it’s extra paperwork when I get home, but overall it’s not too bad. It will also only put me back an hour and a half getting into Le Puy, as long as everything else goes to plan. I might not have time to do the shopping I need, but I can do that in the morning before I start walking. It will be ok!

I had an aisle seat for the flight to Rome. Next time I really need to make sure I have a window seat. It makes it so much easier to sleep. I kept getting bumped on the aisle, and by my seat mate. But I did get 3-4 hours of not very good sleep, but when I woke up and realized I wasn’t going to be sleeping any more, it was about midnight Ohio time. The hardest part of traveling for this long is not being able to lie down. My back is not happy with me.

I am really looking forward to sleeping in a bed tonight. Even a hard bed will be nice.

I haven’t talked about it yet this trip, but I use a Charles Schwab checking account and debit card for traveling in Europe. They refund all ATM fees, so they are definitely the way to go. I remember last time there were a few times the fee was 14 euros. I don’t carry any American money, I just pull out the cash that I need as I go. I keep most of it in a baggie in my money belt, and then I keep the cash for the day in my zippered pocket.

Ok, either Vueling (the airline) doesn’t realize they cancelled my flight or they have really crappy customer service. I just got an email saying that they received my refund request but they only allow changes to itinerary within 24 hours of booking without a 50 euro penalty. I wrote them back and said I didn’t make any changes, they broke their contract that I paid for and therefore I shouldn’t have a penalty. It doesn’t really matter at this point, it is what it is. I know that there is a law in Europe that if your flight is delayed for more than like 3 hours or something you are entitled to $700. Something like that. I could have taken advantage of that last time my flight to Lyon was delayed, but you have to file a claim within 3 years and I found out at the 3.5 year mark. I wonder if something like that applies to cancelled flights. Because they delayed my flight by 48 hours.

Here’s the page I found. https://www.independent.co.uk/travel/news-and-advice/flight-delay-compensation-how-to-claim-eu-airline-uk-brexit-a8728381.html

It says I’m legally entitled to a full refund if they cancel. If I took their delayed flight I would also be entitled to 250 euro compensation. I don’t know if that’s flat compensation or just ticket price up to that amount.

PSA: I just went to get 500 E out of an ATM. It told me it offered currency conversion and said the charge to my account would be $620 including a 12% fee. When I called Charles Schwab to give them a travel notice, the guy told me that ATMs had started offering this currency conversion and they would not refund those charges, so I should watch for them and decline. Even though he had warned me, it was still a little confusing and tricky. I’m sure a lot of people just press accept, thinking they have to! I pressed decline, and it gave me my 500 E. I went in my app to see how much money was taken out, and it was $564. The fee for currency conversion was $60. I don’t see how that can even be legal, because it’s not even accurate! So anyone traveling beware!

I had no trouble using my pack as a carry on for either flight. I’m glad I didn’t pay the fee ahead of time! 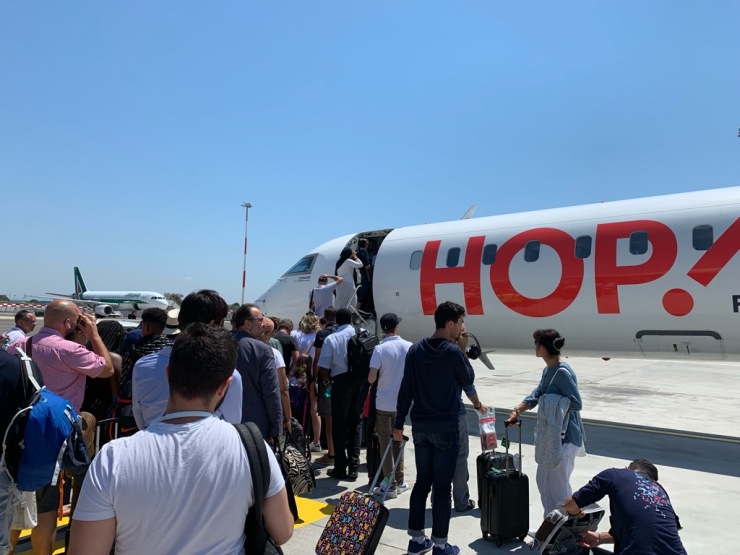 The flight to Lyon loaded away from the terminal, so we had to get on a shuttle. It was really far away. Every time I thought we were getting close to the plane we kept going. If I was walking today, I think I’d be fine, but all of the sitting and waiting has made it hard to keep my eyes open. I’ve been dozing a bit, but not enough to actually pass the time. The flight was delayed a little bit, but I didn’t think it was a big deal and I would still be able to make the 4:30 train to Le Puy. For some reason, we had to go through a passport check again! They only had two people checking them, so that took forever. Once I got through I raced for the train, which comes every 15 mins, and I literally made it by 1 second. However, I went to buy my ticket, and the 4:30, as well as the 4:54 and the 5:54 were sold out! The next one would put me in Le Puy at 9:30, which would probably mean missed dinner, or a crappy dinner at the train station. I had an old browser pulled up from before and tried to buy the 4:30 ticket through that, and it sold me the 5:54 ticket, which will put me at the hotel around 8:30. As I was looking at the ticket buying app, I got distracted and thought I was at my stop, so I got off, but I was too early!! Luckily there was a commuter train on the next track, so I got on that. It was a stupid mistake and I got lucky.

Since I had over an hour to wait for my train, I went to the Decathlon store in the big mall nearby to see if I could buy hiking poles. A Decathlon looks a lot like an IKEA for sports and the outdoors. They even make you go one direction through the maze. Unfortunately I didn’t like any of the grips on the poles, so I’ll have to take my chances on what’s available in Le Puy.

I also went to a pharmacy, but they didn’t have what I wanted. At least I tried to take care of my shopping today.

I’m on the train now, and it is definitely not sold out. One more transfer and I’ll be home free.

The hotel called to find out when I’ll be arriving. They only have check in till 8, but they will wait for me. Hopefully I can still get dinner at the hotel. 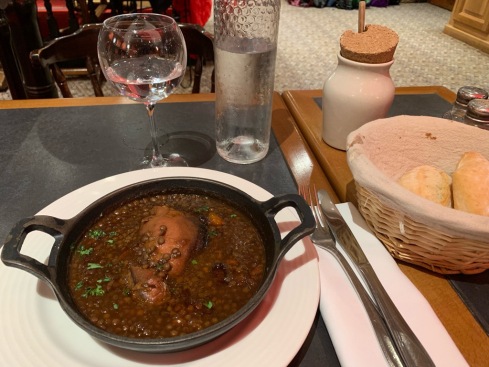 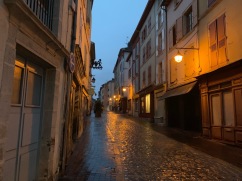 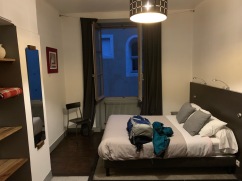 It was raining when I got to Le Puy and it looks like rain all day tomorrow, too.

Hopefully I can fall asleep quickly and sleep well. Tomorrow is officially the beginning! Rain or shine!